At a point in time, women’s fighting was nothing more than usually a side show attraction. As the years went by, the concept of women fighting each other became more and more accepted. There is a women’s boxing league and there are serious women all over the wrestling circuit (and not just t&a shows). There are even rumblings of MMA females (that might be a bit too far though). So, a good plot line for movies would be to interject the female into a man’s fighting world and see how they do. Take underground boxing and the movie: Fight Night, this could be a great marriage.

Michael Dublin (played by Chad Ortis) is a con-man in the hard cold world of underground boxing. As an unfortunate result of his mis-dealings, he is constantly on the run going from city to city and trying to make a buck. He gets in the habit of making too many enemies and finds his life in danger after a con goes bad. However, from out of the shadows appears a female figure who floors Dublin’s would be enemies with vicious punches. Her name is Katherine Parker (played by Rebecca Neuenswander).

Dublin sees a lot of talent in the girl and approaches her to see if she is willing to participate as a boxer in the underground circuit and have him as a manager. His idea is to do “fight rigging” in reverse. In her first few fights, she is taking down men twice her size. But as the fights become harder, the stakes start to rise. Is Kat really up to the task and can Dublin keeps his demons and his past at bay?

The concept of a woman entering a man’s world is nothing new in films. However, this is one of the very few times I’ve seen a woman enter the world of boxing for the sake of film. To be honest, it’s not bad. Dublin starts out as a total creep and his only charisma comes from the actor himself. But he develops into a better person with character and honor. Kat also grows from being an introvert and with learning her craft, she also learns how to be more outward in her disposition.

There are two main problems I see with the film. The first and most obvious is the makeup for Kat’s bruises. Katherine has bruises on her face for most of the film but they just don’t use any normal bruises, they use scary Frankenstein bruises. In fact, there are some instances where the bruises make her more look like a burn victim rather than the subject of a violent beating. I understand this isn’t a movie about Kat’s beauty but the girl does have a lot of natural beauty, they could have played on this a bit more.

The second is the ending. Without giving too much away, it doesn’t make sense at all. As a slight spoiler, given Kat’s sexual preference, what exactly are we supposed to assume here? It just seems to be a let’s make a happy ending for the sake of a happy ending. Rest assured, I do love happy endings but I have to understand them too. The commentary isn’t much of a help either.

The film is presented in 1.78:1 Anamorphic Widescreen. The film is a decent transfer. It has a lot of good colors despite the often dark backdrop of these seedy underground clubs. The color in bruising and other injuries is done very well (even if I think it is a bit too much). I also loved the brilliant use of white in the film and it helped this production looked cutting edge despite the low budget.

The audio is provided in 5.1 English Dolby Digital (a 2.0 mix is also included). The audio is decent but for the most part just works out to be a mixed bag. When Kat’s hand is busted, I felt that was some great effects and made you really feel the blow. However, the surrounds aren’t really used all that much; even for jarring sound effects such as gunshots and punching. Subtitles are provided in Spanish.

Fight Night is a charming film and has a couple of really great characters. Furthermore, those characters actually grow and change which is something very important in film making. It is only hampered by the ending and some of the production work. The disc has some good video and audio capabilities but suffers from a lack of extras. The deleted scenes are okay and the commentary suffers from being non-screen specific when it needs to be and sounds too much like some old friends at a campfire telling old production stories to be informative. I recommend this movie as a strong rental, hopefully we will see more of Rebecca Neunswander and Chad Ortis in future films. 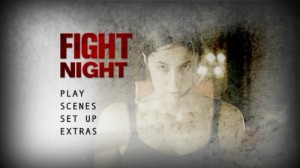 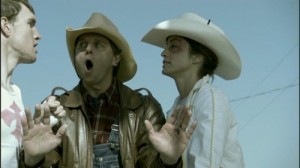 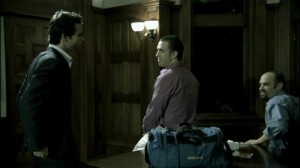 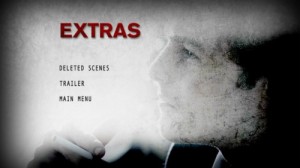 Michael Durr has been reviewing movies for the better part of fifteen years now. He primarily enjoys thrillers, sci-fi, animation and even a little courtroom drama. His favorite films include Escape from New York, the Goonies and anything with Alyssa Milano. When he’s not praising Kurt Russell as the greatest actor of our time or scratching his head over a David Lynch flick, he’s spending time at home in Texas with his lovely wife, Lori and his amazing son. How they put up with him is a mystery, but even Basil Rathbone doesn’t have the time to solve that one.
Spectacular Spider-Man, The: Volume Four Jean Genet’s Un Chant D’Amour