The title of Spectacular Spider-Man was once used to refer to a second-rate line of comics about the web-crawler. The Amazing Spiderman always led the way in sales but the Spectacular production always had its line of fans too. As well as the critics. The critics were often on the books because they had a more casual tone and sometimes didn’t even go along with the original book in terms of plot development. The comic eventually died off and in 2008, the Kids WB decided to use the name for their new animated show. Two seasons and 26 episodes later, this show has done quite well. Volume Four is now released and includes episodes 10-13.

Episode Ten starts out with Dr. Conners and his crew being allowed to study an alien symbiote. However, that symbiote is lost when the Black Cat & Spiderman have an altercation in the lab when Black Cat was trying to steal the life-form. It is soon found that the symbiote has actually affixed itself to the Spider-Man costume thus changing his powers and his personality.

In the eleventh episode, the Sinister Six form. They are composed of Electro, Vulture, Sandman, Rhino, Shocker & Doctor Octopus. Their target is Spiderman who is still dealing with his new alien symbiote-aided suit. In the twelfth episode, the struggle with Spiderman, his mind and body with the alien suit comes to a head. In the final episode of the arc, Peter Parker is finally rid of the alien suit but the symbiote comes in contact with another host. Venom is created and Spidey finds a new villain that he must defeat.

As you can probably tell, this disc features four episodes that make up the very popular Alien Symbiote / Venom story arc from the comics and the movies that always enthralled readers. The show did take some liberties with the idea, but they did remain pure on a lot of levels. These four episodes also introduced the Black Cat which was always a fun tweener of a villain for Spidey as well as being a love interest from time to time. In addition, the idea of the Sinister Six (which showed up from time to time in the comics) first showed up.

To be truthful, the show is a very good one. Actually very good, I haven’t seen a Marvel animated series this good since the older X-Men cartoons of the 90’s. They do put their own spin on certain story arcs and ideas but they still remain close to the comics which is a must for the older viewers such as myself. The only thing I would like to see later on would be the Sandman turned into an empathetic character instead of just another goon which is all he is portrayed as at this current point in time. Oh, and please don’t turn Venom into anything besides a bad guy. The comic tried making him into a vigilante at one point and it didn’t work out too well.

The film is presented in 1.78:1 Anamorphic Widescreen. It is nice to see what is perceived as a kid’s animated show take the next step in technology. The colors are beautiful and the show like its plot combines the best of old techniques with new spins. There is a lot to like here and nothing too much to rain the parade on.

The audio is provided in 5.1 English Dolby Digital and 2.0 Dolby Digital French. The dvd sounds pretty good with the dialog and action being loud and well-represented. Surrounds are used on occasion and I’ll say it again, this is a well produced animated show. Explosions aren’t bad and it isn’t movie quality but it is pretty darn close. English subtitles are also provided.

One might take a look at the rating and wonder why when I am so darn high on the episodes that I give the disk a slightly above average rating. There are two reasons. Lack of extras and why do we have to endure 3-4 episode discs when a 3 or 4 disc season set would have made much more sense. The technology is 21st century but the dvd manufacturers still treat it with VHS marketing techniques. Give us season sets! And give us a few extras or commentaries while you are at it. That aside, the episodes are excellent and the video/audio quality is also top notch. I honestly don’t know if we will see Season Sets, but I hope so. Come on Sony, don’t let us down. Recommended certainly if there never ends up being Season Sets. 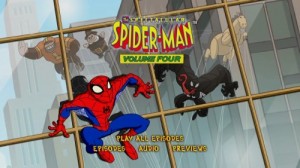 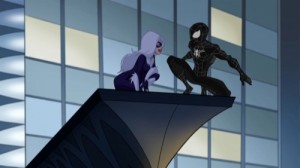 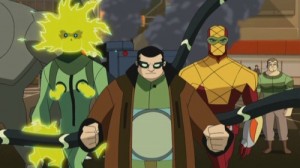 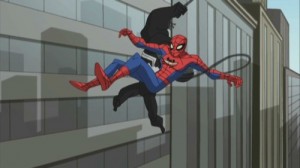 Michael Durr has been reviewing movies for the better part of fifteen years now. He primarily enjoys thrillers, sci-fi, animation and even a little courtroom drama. His favorite films include Escape from New York, the Goonies and anything with Alyssa Milano. When he’s not praising Kurt Russell as the greatest actor of our time or scratching his head over a David Lynch flick, he’s spending time at home in Texas with his lovely wife, Lori and his amazing son. How they put up with him is a mystery, but even Basil Rathbone doesn’t have the time to solve that one.
JCVD Fight Night