Posted in: Disc Reviews by Michael Durr on September 24th, 2009

In 1996, the Mighty Morphin moniker was retired from the Power Rangers. Ever since, they have changed their cast, name, & plot every year and have been running for seventeen seasons. The most current incarnation is called Power Rangers: RPM and is being currently broadcast on ABC. In fact, there a couple of new episodes that should air this Friday (9/26). So, let’s catch you up on some of the earlier episodes on this DVD.

Three years before this series got started, a computer virus with intelligence named Venjix took over all of the computers on the Earth. All communication has become useless and worse yet, Venjix has sent an army of droids to take over the planet. The last place for humanity is the city of Corinth. But the people are surrounded by the evil forces and a large force field. Only the RPM Power Rangers can save the day as they protect Corinth from being destroyed.

These five episodes are introducing us to the backstory of four of the five power rangers. The only one not included is Power Ranger Black (played by Daniel Ewing) who has no memory of his past. These episodes shape the Power Rangers and help the viewer understand their motivation in their chosen Power Rangers role.

Ranger Green (played by Milo Cawthorne) is the story of Ziggy Grover who used to be part of the Scorpion Cartel but was forced to flee after his act of kindness angered all of the crime cartels. Ranger Red (played by Eka Darville) is the story of Scott Truman who used to be codenamed Eagle 2 and was a pilot in the Air Force’s Eagle Squadron. However, he finds himself consistently put down by his father, Colonel Mason Truman (played by James Gaylyn) who considers him not the equal to his late brother, Marcus.

The next two episodes involve Ranger Yellow (played by Rose McIver) whose real name is Summer Landsdown. In her old life, she was a rich and very spoiled heiress and lived in luxury. But in the events that followed, she learned that life wasn’t just about money or be treated like a princess. However, her parents still have not learned that lesson when they bring up the arranged marriage that they have in mind.

The final episode on the disc deals with the Ranger Blue (played by Ari Boyland) or the fable of one Flynn McAllistair. Flynn grew up with comic books and has always lived his life wanting to be a modern day superhero. He wanted to help people but in helping people he would often find himself the recipient of a pink slip. That is until one day when against orders he had to go back into the desert and save innocent bystanders.

These episodes are labeled six to ten in the season but could have been very easily put in as #2-#6 (I would assume #1 would give the backstory of Corinth) but find themselves shuffled towards the early middle. They all do an equal job of setting up the origin of each of the Rangers and then parlay events to get them to the present. This is all conveniently done at the same time as fighting another huge mecha boss and sending them back to the depths from which they came.

One of the things that are different about these Power Rangers is that they do show signs of maturing the series. Maybe they realized that their audience is growing up and while we expect a certain degree of cheese, we would eventually like to see more than the usual villain banter and huge robot fighting. It is also a good thing to see the show actually makes fun of itself with instances where they joke about one-liners or how easy it is to guess what their personality is from the color they wear.

The show is presented in 1.33:1 Fullscreen. Power Rangers are known for their colorful robots and fierce action. Too bad they still haven’t figured out how to produce their shows in Widescreen. The graphics aren’t bad and it suffices just fine as any other average tv show tends to present.

The audio is provided in 2.0 English Dolby Digital. Same old, same old sound here. There is stereo action and they do like to go back and forth between the front three speakers. Dialog is clear but I do have one question I would like to ask. Why to this very day, do all of the bad guy foot soldiers have to make this sound that is the equivalent of nails across the chalkboard? Is it really necessary? Their sole purpose should just be to get beat up.

Regardless of how many times they re-invent the Power Rangers and change the story or change the characters, it really is the same Power Rangers. It’s cheesy, it’s cliché, but at the end of the day we kinda enjoy it. Well some of us do. Power Rangers RPM Volume 2 is actually one of those rare second volumes where you don’t have to go get Volume 1 because all of the episodes focus on back story and bring them up to present day. But again, the main flaw is that this could have benefited from a season set. Since each season is different, season sets actually make a lot of sense.

However, since they are more interested in getting the kid to grab this as an impulse buy, I doubt we will be so fortunate. While I’m wishing, I hope some day they also produce a Power Rangers show that gets rid of the giant robot fights and instead focuses 100% on creating worthy heroes and despicable villains. By the way, Ari Boyland’s interpretation of the Blue Ranger is a great start. Take care. 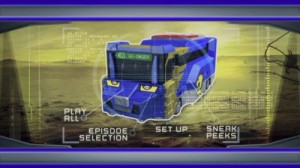 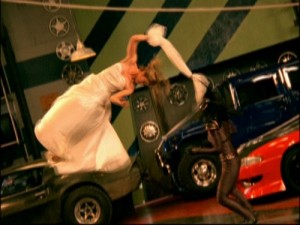 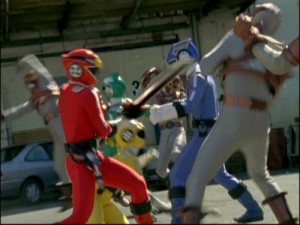 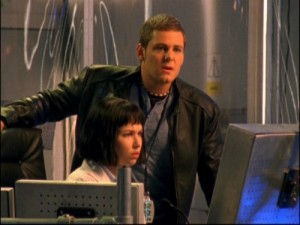 Michael Durr has been reviewing movies for the better part of fifteen years now. He primarily enjoys thrillers, sci-fi, animation and even a little courtroom drama. His favorite films include Escape from New York, the Goonies and anything with Alyssa Milano. When he’s not praising Kurt Russell as the greatest actor of our time or scratching his head over a David Lynch flick, he’s spending time at home in Texas with his lovely wife, Lori and his amazing son. How they put up with him is a mystery, but even Basil Rathbone doesn’t have the time to solve that one.
The Mentalist: The Complete First Season X-Men Origins: Wolverine (Blu-ray)