Legend of the Seeker (The Complete First Season)

Posted in: Disc Reviews by Michael Durr on October 26th, 2009

As you might be surprised to find out, my aspirations include more than being a darn good dvd reviewer & video game columnist. I like to write, really write and not just interpret other people’s works into a ten to twelve paragraph summary document. By really writing, I mean fantasy or the creation of heroes. My wish beyond being published was always to see my work come to life on either the small or big screen. It was refreshing to find a television series based on a fantasy series of books. The Legend of the Seeker is based on Terry Goodkind’s Sword of Truth series. But there was something awfully familiar about the series as I continued to watch it. Let’s find out what that is.

A woman named Kahlan Amnell(played by Bridget Regan) is traveling with her sister through the countryside and beach but there is one problem. She’s being followed by a pack of angry guardsmen on horses. Her sister is struck by an arrow and falls down a cliff. Kahlan soon realizes that her sister is dead and that she must continue en route to her destination. The woman soon reaches the barrier on a nearby beach and it looks like she might meet her end.

As it turns out, the lady has more than just good looks. She takes out a night wisp, a source of magic and holds it towards the barrier. The barrier opens and allows her entry. The guards follow as it stays open long enough to allow them passage. They soon find themselves in Hartland, a place where no magic is supposed to exist because the men fear such power. It looks like the guardsmen have finally caught up with young Kahlan.

A man watches from the forest floor named Richard Cypher (played by Craig Horner), a young woodsman who had seen Kahlan and the guardsmen pass by. He decides to intervene in the situation and help the young lady. The young lady is not as helpless as she seems. She is a Confessor, an ancient order of women who can magnify love within other beings to make them essentially slaves for her. She is also quite skilled in the art of fighting as the fight begins to take shape.

The two are able to fend off the guardsmen and escape safely from their clutches. Kahlan takes this opportunity to separate herself from Richard, thinking of him as a mere boy. Richard upon leaving notices a small spider looking bite on his hand but little does he know that it might be something far more sinister and deadly. As he struggles with the pain, he decides to go back to his home and talk to this father, George Cypher (played by Jeffery Thomas).

Richard and his father start to talk. Soon a pounding comes across the door and it is the same guards as before joined by Richard’s brother: Michael (played by David de Lautour) who is the First Councilor of Hartland. George Cypher gets an odd look in his eyes and tells young Richard that he loves him and that he must seek out Zedd (played by Bruce Spence), an old chicken farmer. Richard quickly runs out before anybody gets to him.

The scene transitions to Zed naked and clutching a chicken talking slowly to her. Out of nowhere, Kahlan appears and talks to Zed as if he were something more. He is in fact, a very powerful wizard named Zeddicus Zu’l Zorander who has taken to the quiet life of being one with nature and a bunch of chickens. It is around this time that Richard falls into their lap as the poison from the deadly creature has taken its course leaving the young man nearly dead. They quickly rush inside.

Zedd soon performs a cure to take the poison straight out of Richard’s body. It is at this time that Kahlan asks Zedd about a Seeker. The Seeker is a powerful warrior who is supposed to use the Sword of Truth along with the book of Counted Shadows and use it to dispose of a great evil known as Darken Rahl(played by Craig Parker). Zedd looks at her and looks at Richard briefly and exclaims that he is the Seeker. Kahlan is confused and questions Zedd.

It seems that Richard is the true Seeker, he was taken from birth by Zedd and given to his stepfather George and his stepmother at a very early age. They were told to not speak of his importance until such time that he is needed by his people. He’s been merely growing up and being human when he is far more. The only problem now is that he is mostly untrained and the Darken Rahl’s men are coming. Can he understand his true destiny and with Kahlan & Zedd’s help vanquish the evil that is cemented in the Midlands.

This is certainly the beginnings of a very interesting fantasy tale. Heck, it looks like it belongs right up there with Hercules or Xena, both of which I watched obsessively (I actually own all of the Hercules Season DVD sets). Wait, this feels a lot like those two series too. *investigates* As it turns out, it is made by the same people. The executive producers on this series are Sam Raimi & Rob Tapert. Now I understand why this all feels so strangely familiar. But in a very good way.

The charisma is there, the strong casting is there, heck New Zealand is still there. At some point, I’m expecting Salmoneus to come down and tell me about some new business venture. But seriously, it’s not that bad, it actually feels somewhat different. There is a lot of well told tales and some good comedy (mainly from Zedd) to compliment the fast and frequent action. My only negative towards the series at this time is that it tends to suffer from taking itself a little too seriously. But that is a very minor quip at that.

The video is in 1.78:1 anamorphic widescreen. This show is shot partly in New Zealand and partly in sound stages but it all comes together so beautifully. The colors are crisp, the scenery is breathtaking and it is nice to see fantasy television move into the 21st century. Good stuff all around and it is honestly a rare moment when any scene is less than awesome.

Audio is provided in 5.1 English Dolby Digital. No problems here despite some of the Aussie dialects. The dialog is spiffy and clear and surrounds are used more often than you would think. Plenty of explosions and good sword fighting compliment an excellently produced soundtrack. Hopefully we get some compilation cds of various music used in the show. Subtitles are provided in French and Spanish.

Legend of the Seeker is my type of series. From the casting to the strong characters to the similarities to certain other fantasy shows, I can safely say that I am digging this show. If it hadn’t been for a brief trailer on another disc that I reviewed, I don’t think I would have given this a chance. The series is fantastic in presentation as well and includes strong video and sound. The extras are impressive for a television series and I give this one of my solidest recommendations. Sure, this is going to appeal to fans of Hercules and Xena but it might just also appeal to others who are looking for a little fantasy and a whole lot of something you can’t explain. Chutzpah perhaps, but more than likely a lot of fun. 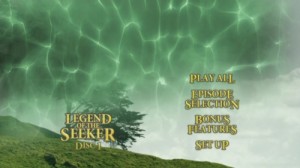 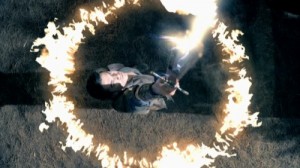 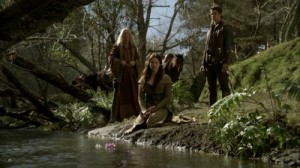 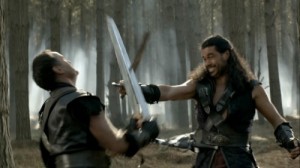 Michael Durr has been reviewing movies for the better part of fifteen years now. He primarily enjoys thrillers, sci-fi, animation and even a little courtroom drama. His favorite films include Escape from New York, the Goonies and anything with Alyssa Milano. When he’s not praising Kurt Russell as the greatest actor of our time or scratching his head over a David Lynch flick, he’s spending time at home in Texas with his lovely wife, Lori and his amazing son. How they put up with him is a mystery, but even Basil Rathbone doesn’t have the time to solve that one.
“31 Nights Of Terror” Man Created A Man Original Song Welcome DiabolikDVD