Posted in: Disc Reviews by Michael Durr on November 30th, 2009

It’s really hard to explain but I feel like I have shared a small lifetime with a director named Bradford May. At first, it was a couple of Darkman sequels that were simply good doses of cult sequel fare. I didn’t expect much and I received back exactly that, so I was satisfied. But then as I continued to review more and more movies, as his films started to pop up in my queue. First there was Ring of Death & then Mask of the Ninja. Both could be described as typical action beat-em up movies. Then Bradford decided to take on direction for The Storm, a mini-series that was shown on NBC and somehow it ended up in my review pile. I’m starting to think that this is no mere coincidence anymore.

Dr. Jonathon Kirk (played by James Van Der Beek) is a renowned scientist working at the Atmospheric Research Institute. He is aided by his fellow scientist, Dr. Jack Hoffman (played by Rich Sommer) and newcomer Carly Meyers (played by Erin Chambers). They are being funded by the U.S. government to manipulate technology that will allow them to control the weather.

The project is overseen by the Institute head: Robert Terrell (played by Treat Williams). In early test runs, the project is mostly successful. However, they are producing random catastrophic events involving weather in other parts of the world. Jonathon thinks they should take more time to analyze the data especially after ARI catches on fire and two of their own die as a result. He decides he can no longer participate in the project. He is allowed but at a cost and Robert has Jonathon tailed after he leaves.

It seems that Robert has higher aspirations than the evolution of technology. He is working with General Wilson Braxton (played by David James Elliott) to develop the technology as a new military weapon under the guise of Project Rainbow. Dr. Kirk after leaving the institute decides that he needs to expose this operation and calls up reporter Danni Nelson (played by Teri Polo) of the Cable News Service.

Together Danni and Jonathon get together to discuss the details of the closely guarded project. They plan to go live with the information on tomorrow’s broadcast. They bundle up for the night and Jonathon decides to go down the street for a coffee to help keep them up and focused. Danni decides to take a shower while he is gone. Two of Terrell’s men break in and Danni becomes a causality.

Jonathon returns to the scene and realizes what happens but before he can further understand what is going on, he is knocked out as his world goes to black. When he wakes up, he is found with a knife in his hand and the police on the way. He is framed for murder. He finds a way to escape but must find somebody he can tell his story to.

As it turns out, that might be the only people he can turn to is the cops, particularly in the form of Detective Devon Williams (played by Marisol Nichols). The clock is running out as a massive hurricane (backlash from the technology) threatens California and millions of lives have the potential to be wiped out. Dr. Jonathon Kirk might have a way to reversal the harmful effects causing by the team but will he be able to in time?

Have I not seen this mini-series/movie before? I’m not talking about when it aired either in the earlier part of this year. I’m talking about how this movie feels and looks like every other disaster movie or a piece of technology gone awry that could cause biblical events. It actually says that in the movie by the way. I mean really Mister Weather reporter? Were you there during “The Great Flood”? You must have been the guy who was hanging on to a nearby tree as Noah sailed away in his Ark.

The clichés don’t end there either. We have side stories as well that show struggle and dire events coming to a beautiful tear-jerking conclusion. Let’s see, there is the EMT driver who has a pregnant wife. We can see where that is going (I’ll give you three guesses and a hint, she has the kid at the worst of times). We have a meteorologist who is the head of weather office and has a forgotten love who works at a sports bar. Anybody want to take a bet at whether or not they get back together?

Then there is the overuse of cameos by somewhat established actors and actresses but for some reason they receive top billing in the mini series. John Larroquette, Teri Polo and Luke Perry all get their name mentioned on the cover but they maybe had 10-15 minutes of screen time. Yeah, I said Luke Perry. Don’t blink because you would probably miss his role anyway as Stillman anyway.

All of that aside, there are a couple of decent acting performances from the cast. James Van Der Beek is fairly convincing as is Treat Williams who does an excellent job of portraying a man who is absorbed by greed and manipulation. I most enjoyed Marisol Nichols as a police detective who actually showed some range and gave life to what was a mindless ride of clichés from beginning to end.

The series is shown in Anamorphic Widescreen 1.78:1 aspect ratio. By itself the show wouldn’t be so bad if they didn’t feel the need to cut to some really corny and bad “effects” shots where snow is falling on a beach. I can almost envision a guy with a bucket of fake snow above the set tossing it on the lady’s head. If you take the corny effects away, you could characterize the video as passable.

Sound is presented in 5.1 Dolby Digital English. The movie despite the catastrophic situations is very dialog driven. Please don’t confuse that with intelligent dialog, it just has a lot of it. The effects are decent, nobody appreciates a good rain as much as I do (because the rain continues for 90% of the movie and yet James’ hair does not move). The audio might actually be the best thing in the movie.

Sometimes, you expect better. Especially when movies or mini-series come from a director where you have actually enjoyed their work. However, The Storm is mostly underwhelming. It is one long string of clichés that would have worked ten times better if they cut some of the side stories and reworked some of the plot to focus more on the main story.

The series was stretched and outside of a few performances by the likes of Treat Williams and Marisol Nichols, the cast is largely forgettable. It probably doesn’t help that the special effects take on the look of a very small budget. It doesn’t look like the studio cared much either since there are no special features and threw this disc in an awful looking eco case to sell to the masses. I want to recommend this for Bradford’s sake, but I can’t. Go watch Darkman 2, Ring of Death, heck Darkman 3, but stay away from this one. 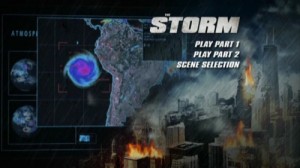 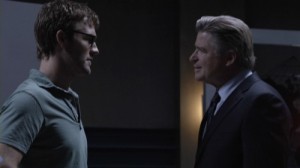 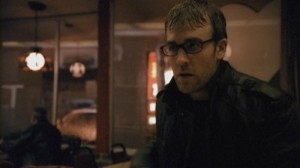 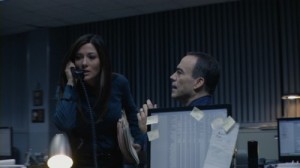 Michael Durr has been reviewing movies for the better part of fifteen years now. He primarily enjoys thrillers, sci-fi, animation and even a little courtroom drama. His favorite films include Escape from New York, the Goonies and anything with Alyssa Milano. When he’s not praising Kurt Russell as the greatest actor of our time or scratching his head over a David Lynch flick, he’s spending time at home in Texas with his lovely wife, Lori and his amazing son. How they put up with him is a mystery, but even Basil Rathbone doesn’t have the time to solve that one.
Angels & Demons (Blu-ray) Mickey’s Magical Christmas: Snowed in at the House of Mouse