Posted in: Disc Reviews by Michael Durr on February 3rd, 2010 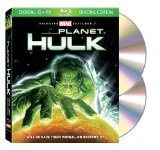 Planet Hulk started out as a storyline from Incredible Hulk #88-#95 (2006). The Hulk was too strong for the planet Earth and so the Illuminati under the direction of Iron Man and Doctor Strange sent him to a planet where he can cause harm to nobody except himself. Of course, things don’t go exactly as the Illuminati probably hoped for. The direct to video movie deals with Hulk’s stay on planet known as Sakaar.

Hulk is simply too strong. He is a danger to the earth and in such the New Avengers has sent him away to an abandoned planet. The Hulk wakes up and finds himself in the rocket. He listens to the words of Iron Man with Doctor Strange and what appears to be Reed Richards and the Black Bolt close by. The team thinks that they are sending him to an isolated planet devoid of life. However, the rocket actually passes through a portal and somehow Hulk ends up on the planet known as Sakaar.

Once Hulk emerges from the rocket, he is attacked by a native insectoid race. Hulk fights back but realizes he is not as strong as he normally is due to passing through the portal. Soon, Sakaar Imperial guards show up and shoot an obedience disk onto his chest and claim him in the name of the Emperor despite the insectoid’s protests. Hulk tries to fight back but is rendered unconscious by the Sakaar’s strange weaponry.

Hulk wakes up and is told he is en route to the coliseum where he must fight to the death. There he isolates himself from the rest of the combatants as they try to include him in their battle plans. The group is led by Lavin Skee, a member of the resistance. The group also includes a shadow priest named Hiroim, an insectoid named Miek, a Kronans (rock monster) named Korg & another resistance member named Elloe Kaifi among others.

The first opponents for this ragtime group are Kronans or more importantly: Korg’s brothers. Korg refuses to fight and the Kronans dominate the group and kill the group’s leader: Lavin Skee. Upon seeing this, Korg becomes enraged and destroys the brothers turning them to dust. Hulk meanwhile has not participated in the fight and wishes to leave the arena despite the pleading of Miek who says the Red King will notice and hurt him.

But as this is going on, the arena releases the Great Devil Corker who kills a few more of the gladiator group. The Hulk jumps up and smashes the Corker thus destroying it. Hulk turns his attention to the Red King but is stopped by Caiera, the Emperor’s Lieutenant (affectionately called his shadow). The Red King eventually steps in and uses the obedience disc against him. He however gets too cocky and the Hulk is able to scar the King’s cheek.

At this point, Caiera steps back in until the Red King is able to subdue him. Hulk is not killed due to the boos of the crowd. He is transported back to the dungeon with the rest of the remaining combatants. At this point; Hiroim, Miek, Korg and Elloe Kaifi hold a Warbound in service for Lavin Skee. They go over their origins and how they came to be on the planet Sakaar. Korg’s story in particular explains how he and his brothers had fought Thor and Beta Ray Bill and then ran from the encounter into the portal.

At this point, there are murmurs of Hulk being the true Sakaarson, a title that means he is the chosen one and will bring back the planet into prosperity. However, the next match is set against the Wildebots and it is not known if Hulk will chose to fight this time. Can the group including the Hulk win their freedom from the Imperial guard and expose the Red King for what he truly is?

The supporting characters of the Planet Hulk cast are all done fairly well. Miek who is used as a comedic character actually turns in a fine performance and becomes much stronger by the end of the movie. It will be interesting to see what they do with him if this ever gets a sequel (in the comics he turns evil). Caiera is also a very interesting character who actually becomes more to the Hulk than just an adversary.

Voice acting is top notch, Rick Wasserman is the Hulk even though he is a different Hulk than we are used to. The only criticism I really have about the movie is their use of Beta Ray Bill. Did I mind that they switched Beta Ray Bill in the place of Silver Surfer? Of course not, I understand legal rights. What I had the issue with is that he felt very much dropped in. He was thrown in at the last second in the Thor origin tie-in with the Kronans and then he just arrives on the scene to be an opponent. All they had to do was spend five extra minutes explaining his relationship to Thor and how he came through the portal and it would have worked out fine.

This film is shown in 1.78:1 Anamorphic Widescreen 1080P. Its standard Marvel animation and colors as well as scenery are top notch. The world of Sakaar comes alive and there is no better representation of this than the opening sequence in the movie. It’s not reference material, but it is still plenty of fun to watch.

The film includes audio presented in 7.1 DTS-HD Master Audio English (Spanish 5.1 Mix also included). The mix is extremely active and bless Marvel for using the uncommon 7.1 format to provide an excellent sound range. Dialog is clear and everything hits you all at once, my only complaint was that surrounds were not used as often as I would hope for. Subtitles are provided for English and Spanish.

Planet Hulk is a very satisfying comic to video adaptation. It shows a great degree of emotional arc by nearly all of the characters and brings together a real Hulk story, not just “Me Hulk Smash”. It would be extremely interesting if this story got a sequel in the form of “World War Hulk” and got a satisfying conclusion. My only gripe is the treatment of the Beta Ray Bill character. The disc is fantastic, supporting above average video and excellent audio. The extras are especially numerous, I just think some of them should have been more relevant. All in all, this disc gets a solid recommendation and will be a fine addition to any Marvel fan’s collection.

Michael Durr has been reviewing movies for the better part of fifteen years now. He primarily enjoys thrillers, sci-fi, animation and even a little courtroom drama. His favorite films include Escape from New York, the Goonies and anything with Alyssa Milano. When he’s not praising Kurt Russell as the greatest actor of our time or scratching his head over a David Lynch flick, he’s spending time at home in Texas with his lovely wife, Lori and his amazing son. How they put up with him is a mystery, but even Basil Rathbone doesn’t have the time to solve that one.
PODCAST: Jack Hill Interview Facing Ali