Posted in: Disc Reviews by Archive Authors on March 10th, 2010 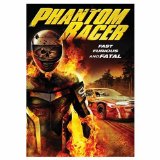 Possessed machines are long-standing horror staples: Christine, The Car, Maximum Overdrive, etc. It’s easy to understand why. Imagine driving down the road in your comfortable four-door sedan when your seatbelt suddenly tightens around your chest and crushes you to death. Now, obviously, that wouldn’t happen in the real world, nor would a thin car window have enough force to decapitate someone. Regardless, these are the kind of things you can expect from Phantom Racer.

The story begins with two rivals, Cutter and J.J., who used to be friends until they pined after the same girl. They get into a racing wreck during a tournament and only one survives. The remaining racer cuts his losses, leaves town and brings his guilt with him.

Fast forward 16 years later, and J.J. Sawyer has traded in the limelight of the driver’s seat for a truck driving job. When a routine delivery goes awry, Sawyer heads back to his hometown for a quick trip to the mechanic. Conveniently, he runs into Cliff—the brother of his dead rival. Cliff’s a bit mentally unstable these days. He spent the last year re-building his brother’s old racing car—with a few sinister customizations courtesy of his brother’s evil spirit. It seems Cutter’s ill intentions didn’t die with him. The car goes on a rampage, literally tearing through the townsfolk as Sawyer reconnects with his old flame and her brazen teenage daughter. The three of them find themselves on the run from the homicidal racer and must brainstorm for ways to escape its wrath.

Greg Evigan has made numerous television appearances, but he’s likely remembered by most for his role on the late 80s sitcom My Two Dads. He’s a fairly effective leading man here, doing the best he can with your run-of-the-mill dialog for this type of film. Baywatch’s Nicole Eggert has the mourning period of a praying mantis, and her daughter Jesse, played by Brenna O’Brien, seems blithely unaffected by the fact that people around her are dropping like flies. Eggert and O’Brien have zero chemistry in the mother/daughter department, but fortunately they’re rarely alone in a scene where something isn’t being terrorized by a demonic speed racer.

This could have been a real snooze fest had director Terry Ingram gone soft and played up the family drama instead of the mayhem. It doesn’t take long to figure out what kind of movie this is. The racer makes its premiere kill within the first 20 minutes of the film—and it’s disgusting. Most of the gore swerves into comedic territory, and it actually works. It’s over the top enough to either gross you out or make you laugh a little.

The film is presented in Widescreen with a 1.78.1 aspect ratio. Picture quality is average, and there’s a decent use of black levels throughout the latter half of the film. The bright red blood splatter pops nicely from the scenic backdrop. The ghostly special effects are nothing to brag about, but that’s to be expected for a made-for-television production.

Phantom Racer is presented in 5.1 Dolby Digital Surround Sound. I was pleasantly surprised with the film’s dynamic soundtrack. The sound of screeching tires and revving engines really rips through the speakers. The dialog is always clear, and a wide array of ambient noise adds up to a lively, well-rounded mix.

There are no special features with this film.

What I enjoyed most about this film is how well it catered to its audience. This is exactly the type of film you gather your friends around for on Halloween, or any night when there’s nothing else on television. There’s plenty of cringe-worthy gore to keep horror fans interested, but there’s also enough camp to keep you laughing. Although the action starts to wane at the end, Phantom Racer is mostly brain-free fun.