Spectacular Spider-Man is back with his eighth volume and the final one for the 2nd season. As we saw in the last few episodes, it appears that Green Goblin is again rearing his ugly head and looking to get rid of your friendly neighborhood Spider-Man. Furthermore, there are other super villains chomping at the bit to get back at Spider-Man for being put behind bars. Can Spidey survive this onslaught? Let’s find out.

Episode 24 opens up with Spider-Man in a battle with Molten Man at a local pool hall while Liz Allan (Peter Parker’s girlfriend at this point) and Mary Jane Watson are trapped behind the bar. We later find out that Molten Man is Liz’s brother: Mark who has a severe gambling problem. Somehow you know that Green Goblin is the cause of what is going on. Is Spiderman all-in or will he bust?

Episode 25 has finally done it. Spider-Man has been placed in a maximum security prison. Don’t worry, he’s been placed there in order to test the jail’s first impenetrable cell. If there is one person who can do it, Spidey is your guy. However, looming in the shadows is Black Cat who is looking to break out her father. But who exactly is her father? You’ll be shocked to find out.

Episode 26 concludes the mini-Green Goblin arc. Spider-Man starts off this episode in classic style by fighting a bunch of Pumpkin heads or better known as the Gob Squad. Harry Osborn has disappeared since Episode 25 but he shows back up and talks to Gwen about how he knows he was Green Goblin at one point. But he isn’t now and neither is his father Norman Osborn. So who exactly is that Green skinned villain running around town? Find out in this explosive Season Two finale!

This show honestly keeps getting better. It has a great ability to feed off past shows while providing new direction for Spidey and the cast of villains that he fights. When he takes off the mask and becomes Peter Parker, it provides an interesting love story and how he deals with his true love with Gwen Stacy but has roaming eyes for Liz Allan or Mary Jane. But it isn’t distracting enough to keep you from all of the interesting action and plot twists that Spider-Man finds himself involved in.

The only downside I think I found in this volume was Molten Man’s character in Episode 24 and part of 25. They seemingly wrote him as a terrible cliché. If he isn’t saying “all in” one minute or some lame gambling joke the next, he is about as bland as they come. Molten Man wasn’t exactly all that impressive in the comics but it would have been stronger if he didn’t play such a joke character here.

The series is presented in 1.78:1 Anamorphic Widescreen. The scenery of Manhattan looks great and so do the surrounding areas. Animation is top notch and the villains really look good. I like the fire effects of Episode 24 and they make a habit of showing a lot of detail even where you don’t expect it. No complaints here, just looking forward to more villains that they can replicate.

The audio is provided in 5.1 English Dolby Digital and 2.0 Dolby Digital French. We certainly love that theme song, don’t we kids? The dialog is crystal clear and sound effects are actually used for more than the center speaker. Action is awesome and explosions don’t feel canned. It’s the super hero show audibly we wished for growing up but never quite got. Closed captioning is also provided.

As I write this review, I realize I will be writing about Spectacular Spider-Man (barring a 2nd season or complete series set) for the last time. A couple of weeks ago, Disney decided to can the series and will be going on with a new show in the fall under the Ultimate Spider-Man persona. While I do read the Ultimate Spider-Man in graphic novel form, this is most depressing as I was enjoying myself in the Spectacular Spider-Man world and was hoping that they would keep going.

Twenty-six episodes hardly seems enough to enjoy the series and they were just starting to flesh out the characters. Even worse, the 2nd season ends on a cliffhanger of sorts and we’ll never get an appropriate finish. But here are the last three episodes for us to enjoy in this final eighth volume. The series as a whole is highly recommended, it just ended way too soon. 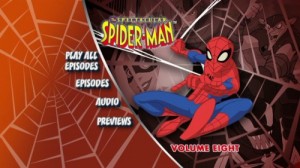 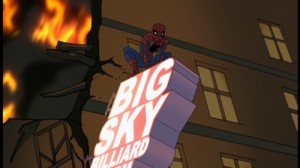 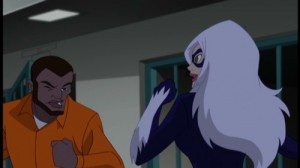 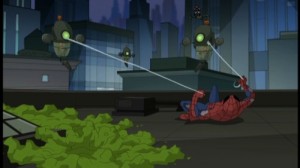 Michael Durr has been reviewing movies for the better part of fifteen years now. He primarily enjoys thrillers, sci-fi, animation and even a little courtroom drama. His favorite films include Escape from New York, the Goonies and anything with Alyssa Milano. When he’s not praising Kurt Russell as the greatest actor of our time or scratching his head over a David Lynch flick, he’s spending time at home in Texas with his lovely wife, Lori and his amazing son. How they put up with him is a mystery, but even Basil Rathbone doesn’t have the time to solve that one.
Dare to Play the Game Cocoon (Blu-ray)