One of the most basic pleasures in my soul is received from a great stand-up comedian. I grew up with the likes of Richard Pryor, George Carlin and Robin Williams. As a result, I listen to many stand-up specialists whenever I can, some are funny, some are not so funny and some I don’t know if I’m listening to comedy or amateur hour at 1 in the morning. Today’s special is David Cross, experienced to the stand-up scene in a brand new special. Let’s see how it goes.

A little bit of history on David Cross, he’s 46 and even though you might struggle to remember what he has been in, most likely you have seen his face before. He’s been in the Ben Stiller Show, Arrested Development, and Mr. Show. More recently, he has been a part of the Alvin and the Chipmunk movies and even did voices for a few video games. In his personal life, he’s a proclaimed atheist and is dating Amber Tamblyn who is well smoking hot and about twenty years younger.

Now that you have perhaps an insight into Mr. Cross, we come to his new comedy special: Bigger and Blackerer. I guess Chris Rock took his original title eh? Anyway, the special is shot in the Boston’s Wilbur Theatre and merged from the two performances he did. The special is about an hours worth of material before you get to the extras and side bits. So, what type of material does David talk about?

Well, he starts out with some typical fare about airlines which is actually pretty funny. He does this early bit with a guy who is signing in the audience. Except the guy is deaf and is apparently signing his own jokes. Okay, that was also funny. This is actually getting off to a good start, despite what I have heard in the commercial I saw earlier this week. But then I start to recognize some of the material from the commercial and my laughing starts to slow down.

He starts making jokes about health care and the tea party people. This is certainly from the leftist side of the fence and is pro-Obama though he never comes out and says it. Since I’m middle of the fence and only lean a little bit to the right, I can still laugh at it but then he starts going into what the majority of the show is about. Religion. Obvious to his background, he starts to attack Christian, Mormons, and Scientologists.

Now, those groups are arguably fairly easy to riff off on. Heck, I could take up half this column talking about Mormons or Scientologists and their idiotic ways if I wanted to. But, the material isn’t even humorous, it’s boring. It’s all centered around, okay we get it, you are an atheist, you don’t want to believe in anything. But he keeps going and rather than perhaps making fun of himself (let me tell you, there are a million jokes you can make about atheism) or balancing out, he keeps attacking Christians.

Earlier in the performance, he makes the statement in the vain of: “Later on when I go into my spiel about religion for twenty five minutes, you’ll be wishing I was telling airplane jokes”. You are absolutely right, I was wishing for an airplane joke. Actually I was wishing for the joke that would actually make David Cross seem like anything besides an atheist with a pro-liberal agenda. I didn’t find it.

Nevertheless, it spirals downward from there. It gets a little better when he talks about various topics such as his contempt against hippies and an adult film called “My Ass is Haunted”. The only problem is that it never recovers from his tirade on organized religion. Sure, there are plenty of things to make fun of, but most of them aren’t original and the presentation isn’t breaking any new ground. It’s unfortunate because it started pretty well.

The video is in 1.78:1 anamorphic widescreen. The show is filmed at the Boston’s Wilbur Theatre and looks like a great venue for such a concert. One thing you notice with the widescreen (which fairly recently was not the norm for standup concerts) is that you get a much larger sense of the appreciative audience that are in attendance for his jokes. Pretty good presentation and there isn’t anything to really criticize in the video department.

We get a Dolby Digital 5.1 English sound track (2.0 mix also included) for the show. Since this is a standup special, as long as you can hear Cross, there really is nothing further to be said about it. He sounds fine, his slight accent is barely noticeable and doesn’t interfere with your listening enjoyment. Even the planned audience members he rifts with are fairly clear and there are no issues worth mentioning. No subtitles are included that I could find.

When it comes to stand-up comedians, I have the hardest time finding a comedian that makes fun of all sides. The left, the right, the middle, the religious, the non-religious. To be honest, I want somebody who is not afraid to offend anyone. But what do I find most of the time? A stand-up comedian who spends more of his time preaching than he or she does making me laugh. David Cross is unfortunately no different.

Some of his early bits are pretty hilarious but it is not long before he dives into religion and spends more of his time ushering out the same tired old jokes of how Christians are hypocrites and they believe in monsters. The odd thing is, his best material is found in the extras which are probably the highlight of the disc. The video and audio are solid and some people will love this type of humor, there is no doubt in my mind. For me, I’m off to search for something that is probably impossible to find but I’m sure it is out there somewhere. Maybe. 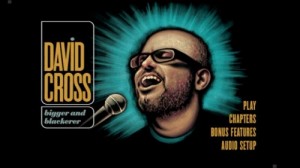 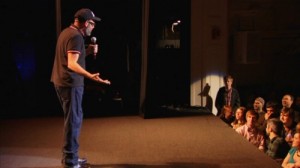 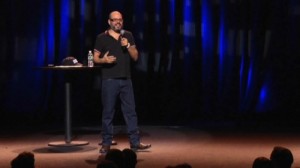 Michael Durr has been reviewing movies for the better part of fifteen years now. He primarily enjoys thrillers, sci-fi, animation and even a little courtroom drama. His favorite films include Escape from New York, the Goonies and anything with Alyssa Milano. When he’s not praising Kurt Russell as the greatest actor of our time or scratching his head over a David Lynch flick, he’s spending time at home in Texas with his lovely wife, Lori and his amazing son. How they put up with him is a mystery, but even Basil Rathbone doesn’t have the time to solve that one.
I Know What I Saw The Virginian – Complete First Season