The closest I ever got to regularly watching a medical show in my life was watching General Hospital, a soap opera with my mom growing up. When I was out of school, I would catch here and there an episode of Scrubs which was a wonderful comedy. I then wondered how I would fair with the brand new medical drama: HawthoRNe which just wrapped up its first season on TNT. Man, do I miss Luke and Laura.

Richmond Trinity Hospital is one of the finest medical establishments in Richmond, Virginia. Like most hospitals, it is run by a board of directors. However, if one were to walk the hallowed halls, one would immediately realize it is really run by the chief nursing officer, Christina Hawthorne (played by Jada Pinkett Smith). She and her quite adequate nursing squad handle a multitude of patients with unique personalities and different aliments.

Her staff includes Ray Stein (played by David Julian Hirsh), a male nurse who has not quite passed his MCATS and has problems adjusting to a female dominated profession. Then there is also Bobbie Jackson (played by Suleka Mathew), another RN who has a prosthetic leg which doesn’t keep her from being an efficient team member but makes her question her self-esteem with potential male mates.

Then there is the Barbie doll of the RN squad, Candy Sullivan (played by Christina Moore) who likes to give a little bit extra attention to those men who served in the Armed Forces. Kelly Epson (played by Vanessa Lengies) is the new nurse on the staff as she learns the ropes. The Chief of Surgery, Dr. Tom Wakefield (played by Michael Vartan) also plays an important role on this medical team.

But the true focus of the show is Christina Hawthorne and how she micro manages nearly every situation that happens in the hospital. In the first episode, she runs through security without a badge and tries to convince a patient to not commit suicide. The patient tries anyway, doesn’t succeed but somehow his terminal cancer goes into remission. Somehow, I don’t remember that remedy on the cure cancer website. But that’s only an inkling of what to expect for future episodes.

She consistently tells doctors what they should and shouldn’t be doing in regards to treatment. At one point, she actually takes a defibrillator away from a doctor who was ready to pronounce death and tells them to increase the voltage (of course, the person actually lives afterwards). Christina isn’t exactly kind to her own daughter, Camille (played by Hannah Hodson) and even makes her take a drug test when one of her friends is caught doping.

Maybe that’s my whole problem with the show. The regular nurses are likeable enough and even Jada isn’t too bad but the outlandish circumstances they write the show in is borderline laughable. I don’t mean in the Scrubs way either which is intended to be funny and unrealistic. In most hospitals, Christina would be thrown out on her ass so quick for a laundry list of crimes, it isn’t funny. She’s a walking malpractice suit and every time you think she’s done the worst thing you can think of, she does something else to top it.

But the problem is that they are doing it in an ultra serious fashion which makes me question where in any possible reality this hospital would actually exist. The only story I found touching and endearing throughout the first season was the story of Isabel Walsh (played by Aisha Hinds) and her son Moses. She grows from being a bag lady on the street into a decent and respectable mother and lab assistant.

The video is in 1.78:1 anamorphic widescreen. TNT has really led the way in making sure that nearly all of their programming is in HD. Hawthorne is no exception. The color is quite vivid for the surroundings of a hospital. Sometimes there is a little bit of poor lighting or situations where objects lose their focus but the presentation is more than adequate.

We get a Dolby Digital 5.1 English sound track for the show. The show is heavy on the dialog and hospital type sound effects as expected. The dialog is relatively crystal clear, there are a couple of weak moments but nothing I recall super specifically right now. It’s fairly reasonable to expect that knowing everybody is running around all the time and caring for the patients. Subtitles for included for English SDH

HawthoRNe is ultimately a flawed televison medical drama. The actors and actresses actually do a decent job of their characters but they are cursed by outlandish writing. The writing does the equivalent of making the head nurse seem like a complete lunatic and with the tone of the series, that is not a good thing. The discs are well produced and there are quite a few extras (albeit short ones) to go through if you are a fan of this show.

Interestingly of note, the show does have its share of guest stars as in the first season alone we get Malcolm Jamaal Warner, Cloris Leachman and others to show up, usually as patients. However, I really can’t recommend the show. There are far better medical dramas on television both serious and not so serious and this simply isn’t one of them.

Disc Two
The Sense of Belonging
Trust Me
Night Moves 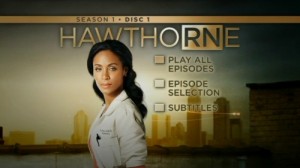 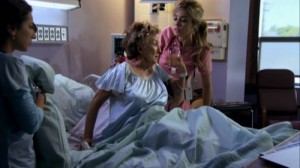 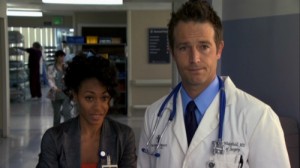 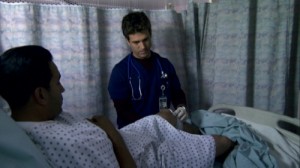 Michael Durr has been reviewing movies for the better part of fifteen years now. He primarily enjoys thrillers, sci-fi, animation and even a little courtroom drama. His favorite films include Escape from New York, the Goonies and anything with Alyssa Milano. When he’s not praising Kurt Russell as the greatest actor of our time or scratching his head over a David Lynch flick, he’s spending time at home in Texas with his lovely wife, Lori and his amazing son. How they put up with him is a mystery, but even Basil Rathbone doesn’t have the time to solve that one.
Dare to Play the Game Caddyshack