Posted in: Disc Reviews by Michael Durr on July 6th, 2010

Everybody’s favorite Small Wonder is back for another season. Most of you will remember my first season review of Small Wonder. The show wasn’t as great as I remember but if Shout Factory is willing to release a second season on dvd, I’m willing to give the show another try. Let’s see how the Lawsons and Vicki spend the next twenty four episodes of mayhem and laughter.

Vicki (played by Tiffany Brissette) is adapting well to human life. She participates in many chores and even participates in home schooling with Joan (played by Marla Pennington-Rowan). She plays with Jamie (played by Jerry Supiran) and even has learned how to slam the door in the face of Harriet (played by Emily Schulman). If Vicki had feelings, it would be safe to say that she could be described as happy.

Meanwhile her creator and father of the family, Ted Lawson (played by Dick Christie) is still a robotics engineer and is doing quite well for himself. With the knowledge he obtains, he is also able to fine tune Vicki’s logic circuits and make her more useful around the house. However, the family needs to overcome some crucial challenges in the second season to keep this not so basic family together.

In the very first episode of the second season: Chewed Out, Jamie deals with a very difficult subject. He is new to his junior high and is desperately trying to fit in. As a result, he tries tobacco both in a cigarette and then chewing tobacco. He learns the hard way very quickly that this is not the way to become popular at his new school. His life is also further invaded when his mom, Joan becomes a substitute teacher at the school.

Joan has to bring along Vicki who exhibits both awkwardness and extreme intelligence in the classroom setting. This leads into further episodes where Vicki acts out in a few ways including stealing. The family will also encounter other socially aware subjects such as homelessness or starting a neighborhood watch. Life gets interesting for the Lawsons but they learn how to take things one episode at a time.

In many ways, the second season of Small Wonder is much like the first. The Lawsons are much like most families in sitcoms and deal with many of the same typical ideas other shows do. It is just that their spin on it is the small wonder: Vicki. Vicki shows the way to an assortment of laughs by playing everything straight. The second season is actually better than the first due to the ability to shed back story and stick to the one-liners that these cast members seem to be so good at.

The main problem in this season is that for the most part they got rid of the Brindles, primarily Brandon and Bonnie (played by William Bogert and Edie McClurg). They show up in a couple of key episodes, but it is more of a guest star role. Their daughter, Harriet is still in every episode but she’s merely the fodder for Jamie’s jokes. But in a way, with the removal of the Brindle parents, Harriet becomes more bearable and a much more sympathetic character.

The shows are presented in 1.33:1 Fullscreen. The tapes really show their age for the most part with grain and specs all over the place. They even make the mention when you put in the dvd disc that they were taken from the best possible surviving masters. It’s basically apologizing if this isn’t up to normal tv standards. The color is certainly okay and watchable, just don’t expect anything special.

The audio fares a little better with its Dolby Digital Mono (English) presentation. The dialog is clear and the sound is healthy enough to enjoy the show. Any sound effects associated sound normal and not impressive nor oppressive. The audio is about the same as the first season except they turned up the use of special effects for Vicki’s sake. As with the video, the masters can only deliver so much.

The second season of Small Wonder does learn a little bit from their season one mistakes. They stick to the “fish out of water” jokes with Vicki and milk them for all its worth. Unfortunately, with the loss of the Brindles, the Lawsons become their own worst enemy and we are treated to many episodes where they are tackling social subjects. We move on to the technical details where the discs are quite the mixed bag.

Video and audio are probably the best they are going to get, but that’s not saying much. The first season had a few commentaries and some featurettes but the second season doesn’t even get that. The final kicker is that this isn’t even going to be sold at your favorite store. Only the Shout Factory Website, Amazon or some third party outfit like Ebay will be carrying this one. Fans should go out of their way to pick this up or it is entirely possible that this might not see further season releases.

However, the stores are the ones to blame for this piece of bad news as their space for TV releases have decreased considerably. Well, unless your name is CSI, NCIS or the newest “it” show. Anyhow, hopefully this isn’t a sign of things to come for these smaller shows. Small Wonder might not be the best of the bunch, but there are plenty of TV shows out there that deserve dvd releases from fine companies such as Shout Factory. Let’s hope they get them.

Episodes
Disc One
Chewed Out
Money, Money, Money
My Mother the Teacher
Here Comes the Judge
Home Sweet Homeless
Crazy Like a Fox 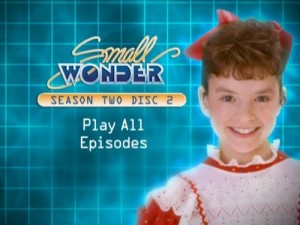 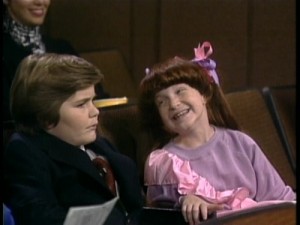 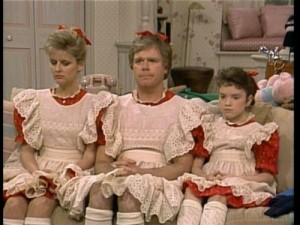 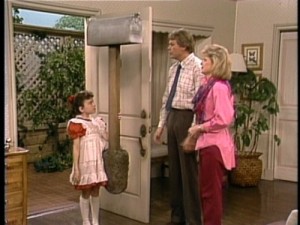 Michael Durr has been reviewing movies for the better part of fifteen years now. He primarily enjoys thrillers, sci-fi, animation and even a little courtroom drama. His favorite films include Escape from New York, the Goonies and anything with Alyssa Milano. When he’s not praising Kurt Russell as the greatest actor of our time or scratching his head over a David Lynch flick, he’s spending time at home in Texas with his lovely wife, Lori and his amazing son. How they put up with him is a mystery, but even Basil Rathbone doesn’t have the time to solve that one.
Serious Moonlight Youth in Revolt