NOVA: Mt St. Helens: Back from the Dead

Posted in: Disc Reviews by Gino Sassani on August 3rd, 2010 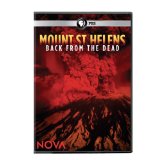 NOVA is one of the longest-running series of documentaries in television history. It has been a mainstay on public television since 1974 when the first episode took us behind the scenes of the filming of a nature biography. Since then the series has explored everything from space to mathematics. Episodes have focused on people, places, and things. Classroom curricula have been built around the series. In case you’re keeping track, that’s 37 years that the show has been on television. Technology has gone through incredible changes, as have the subjects of episodes, later updated in later episodes. You’d be hard- pressed to find anyone who has not seen at least one episode. The release of Mount St. Helens: Back From The Dead marks the most recent episode to air, finishing the 37th season.

Mount St. Helens, located in Washington state, is responsible for the most powerful volcanic eruption in the continental United States in the last 150 years. It was not a typical eruption. There was very little of the lava flow that most of us think about when we think of volcanoes. But it blasted a plume of ash and toxic gas miles into the air and destroyed an area of about 200 square miles in the blink of an eye. It was the first time a volcano erupted sideways. The eruption caused nearly 50 deaths and untold damage.

This episode doesn’t deal much with the actual eruption of the volcano. There is pre-eruption footage and plenty of both actual and CG reenactment stuff, but it’s there more or less to set the stage. This show deals much more with the aftermath. The episode follows scientists as they explore the volcano post-eruption. Some are looking for clues as to why it erupted when it did. Others are searching for any signs of life in the wake of the powerful explosion. The first such creatures, discovered almost a year after the event, were gophers. The show follows the years and marks the signs of life returning to the site and a nearby lake.

The episode is presented in its original broadcast aspect ratio of 1.78:1. There is plenty of inconsistency here, but it has to be expected. Some of the footage is 30 years old and taken under extraordinary circumstances. It looks about as good as a standard-definition documentary should.

The Dolby Digital 2.0 is merely strong enough to deliver the exposition.

The episode is typical of what I’ve come to expect from the NOVA series. It delivers a lot of interesting information while posing some important questions about the volcano’s future. “Mount St. Helens will explode again. The only question is when and how big”.

Gino Sassani is a member of the Southeastern Film Critic's Association (SEFCA). He is a film and television critic based in Tampa, Florida. He's also the Senior Editor here at Upcomingdiscs. Gino started reviewing films in the early 1990's as a segment of his local television show Focus. He's an award-winning recording artist for Omega Records. Gino is currently working on his 8th album Merchants & Mercenaries. Gino took over Upcomingdiscs Dec 1, 2008. He works out of a home theater he calls The Reel World. Favorite films: The Godfather, The Godfather Part II, The Body Snatcher (Val Lewton film with Karloff and Lugosi, not the pod people film), Unforgiven, Gladiator, The Lion King, Jaws, Son Of Frankenstein, The Good, The Bad And The Ugly, and Monsters, Inc.
Contest In Honor Of Mickey Mouse Stargate Universe – SGU: Season 1.5 (Blu-ray)