Posted in: Disc Reviews by Michael Durr on August 21st, 2010

Have you ever walked into a 2 hour movie with only half an hour left to go? It is not a picnic. The same can be said of a television show that is entering its fourth (and final) season and you haven’t watched a single episode. That’s the situation that presented myself with Ugly Betty. However, I have always found myself up to the challenge and we’ll step into this adventure with our head held high.

In the final episode of season three, we see Molly (played by Sarah Lafluer) is dying. Betty (played by America Ferrera) and Marc (played by Michael Urie) are fighting over the position of associate features editor which is now vacant. The winner, Betty is decided on a coin flip conducted by Daniel (played by Eric Mabius) and Wilhelmina(played by Vanessa Williams). But as Betty settles into her new position, her boyfriend, Matt (played by Daniel Eric Gold) breaks up with her.

Matt lets her know that he will be her boss since he took a vacancy also at Mode magazine. Wilhelmina is not exactly job secure either as she has issues with Calvin(played by David Rasche) and Claire (played by Judith Light) who are investor and owner, respectively at Mode. Meanwhile, Wilhelmina enters a room in her room, drops a glass and asks “What Are You Doing Here?” to a character that is not shown.

In the last scenes, Claire is burning an adoption notice which could only mean she did not have an abortion as she told Wilhelmina. Daniel comes home but only finds death as Molly has passed away. The show ends with Daniel and Betty in a tearful embrace over Molly’s unfortunate passing. I’m completely lost, I admit it. But without fail, we shall continue into the fourth season with all new stories and intrigue (dramatic music interlude).

Season four begins and Betty is finding difficulty in adapting to her new job. Her boss is her ex-boyfriend Matt who is still bitter over the breakup. Betty has a new officemate named Megan (pronounced Meegan and played by Smith Cho)) who can’t stand her and the rest of the people in the department resent Betty because of her special relationship with Daniel, Editor-in-chief. Matt has his own problems and sleeps with the receptionist, Amanda (played by Becki Newton) basically on the rebound as he has not dealt with his feelings toward Betty.

In the cliffhanger from the last season, the person Wilhelmina sees is her daughter, Nico (played by Yaya DaCosta). It seems that Nico is involved in some nefarious doings and needs help from her mother. Daniel is still having trouble with the death of Molly as he sleeps with Amanda (apparently, this is a common plot device) and starts a relationship with a girl named Natalie (played by Jamie-Lynn Sigler) who is in his therapy group.

On Betty’s homefront, her sister Hilda (played by Ana Ortiz) is dealing with her relationship to Archie (played by Ralph Macchio) who is running for public office. There might also be an old flame, Bobby (played by Adam Rodriguez) running about. Justin (played by Mark Indelicato), Hilda’s son is being questioned about his sexual orientation and tries to find friends at his high school. But the real question of season four? Is Betty ever going to get her braces taken off? It’s been four years for pete’s sakes.

So, this show actually lasted four seasons and eighty five episodes? In fairness, this show was struggling in the third and fourth season and they finally decided to give it the heave ho. I guess the initial gimmick of a show about an “ugly” girl (who isn’t ugly at all) working at a fashion magazine can only get you so far. Truth be told, the actors and actresses make the surroundings around Mode a pretty funny place. But from the episodes I watched in the fourth season, it is hard to tell if there is any direction to what they are doing. It is one tired fashion joke after the next.

America Ferrera and Vanessa Williams are perhaps the strongest in character but even I found that Vanessa in particular just wasn’t evil enough for me. America has a long future in this business but hopefully her Ugly Betty days won’t leave her stereotyped (doubtful). Another quibble of mine, could they have done more with reoccurring character Calvin Hartley? David Rasche is an awesome actor and was completely wasted here. The show never felt up to par of many other hour long dramas because they never could decide if they were trying to be funny or serious.

The video is the standard 1.78:1 Anamorphic Widescreen presentation. Yes, even Ugly Betty gets the HD treatment. And no, she’s not ugly at all (let’s get that bad joke out of the way). Color is excellent, and there are no real problems I could find. As expected, there really isn’t any dark scenes at the vibrant Mode magazine, so there is no chance to find any of the usual assorted video problems.

The sound is presented in English Dolby Digital 5.1 Stereo Sound. This is not a sound effect laden show, but they do a decent job of making it as robust as a set show can be. Dialog is nice and clear even with a few of the assorted speech patterns by the characters of the show. Conversations stay in the center and hardly ever deviate. Subtitles are included for the French and the Spanish speaking populace.

Rumors are that they still want to make an Ugly Betty movie. I guess the rationale is that if it worked for Sex and the City, surely it would work for Ugly Betty. Except SaTC was a much better and longer lasting show. Ugly Betty is a good show when it sticks to comedy but usually fails when it tries to take a much more serious tone. Many of the actors and actresses are quite talented but are brought down by questionable writing.

The disc package should delight many fans. There is a great wealth of extras (which really showcase Michael Urie and Becki Newton) as well as more than capable video and sound. Honestly, I can’t recommend this show to newcomers. However, most of the people reading this review love the series and I could tell them that Betty dresses up as a hot dog in one episode and you would still watch it. Oh wait, that happened. Needless to say, the fans will certainly eat up this final season. Thanks for reading. 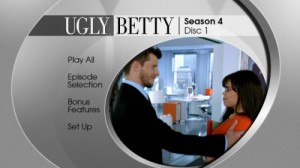 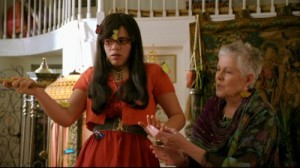 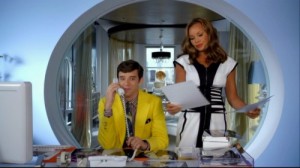 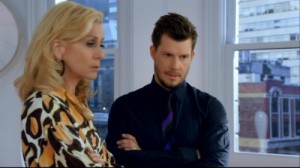 Disc 3
Back in Her Place
Blackout!
Chica and the Man
Smokin’ Hot
Fire and Nice

Michael Durr has been reviewing movies for the better part of fifteen years now. He primarily enjoys thrillers, sci-fi, animation and even a little courtroom drama. His favorite films include Escape from New York, the Goonies and anything with Alyssa Milano. When he’s not praising Kurt Russell as the greatest actor of our time or scratching his head over a David Lynch flick, he’s spending time at home in Texas with his lovely wife, Lori and his amazing son. How they put up with him is a mystery, but even Basil Rathbone doesn’t have the time to solve that one.
The Last Song Wolverine and the X-Men: Final Crisis Trilogy