Posted in: Disc Reviews by David Annandale on January 30th, 2012 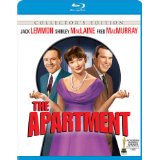 Jack Lemmon is a rather meek insurance company employee who is slowly working his way up the corporate ladder by lending his apartment to married executives looking for a place to take their girlfriends. Life is rather inconvenient, as he is locked out of his home at all hours, but things become even more complicated when the big boss (Fred McMurray) takes an interest. The good news is that Lemmon gets another promotion. The bad news is that McMurray’s affair is with Shirley MacLaine, the elevator girl for whom Lemmon is carrying a torch.

Billy Wilder’s follow-up to Some Like It Hot certainly has plenty of funny moments, most involving Lemmon’s doctor neighbor (Jack Kuschen). But the film doesn’t shy away from the darker implications of its storyline (up to and including a suicide attempt). The result is a romantic comedy-drama that is sweet without being sentimental, and hard-nosed without being cynical. And the audience’s emotions are thus sincerely earned.

The Apartment is presented in its original aspect ratio of 2.35:1. The 1080p image is arrived at with an AVC MPEG-4 codec at an average 30 mbps. The print is utterly marvelous, for all intents and purposes free of grain, and there isn’t a blemish in sight. The black-and-white tones are perfect, their high contrast establishing the film’s tone as existing in that tricky realm between drama and comedy. The image is perfectly sharp, and I, for one, was certainly untroubled by edge enhancement.

The DTS-HD Master Audio 2.0 is about what you would expect. The dialog feeds the piece, and it comes through without any age-related distortions or hiss issues. A problem with a sound effect when Lemmon opens a TV dinner has also been repaired.

The features aren’t copious, but they are solid. “Inside The Apartment” is a documentary that keeps director Billy Wilder as the protagonist. Lemmon is, of course, the spotlit subject of “Magic Time: The Art of Jack Lemmon” (the title, incidentally, is a line from The Days of Wine and Roses). Commentary is provided by film producer/historian Richard S Block, who, in a clear, articulate fashion, tackles the movie in minute and painstaking detail.

Even a re-release of film this good is welcome. And this is very welcome.