Posted in: Disc Reviews by Gino Sassani on February 3rd, 2012 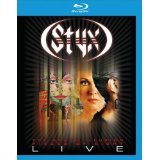 “It is generally thought that time travel is impossible. Tonight, however, we ask you to bravely go where no audience has gone before, back in time to the 1970’s”

And that’s exactly what you’ll get to do if you’re smart enough to take my advice and pick up Styx: The Grand Illusion & Pieces Of Eight Live on Blu-ray from Eagle Rock Entertainment. It doesn’t matter if you’re old enough to remember when these albums were first released in 1977 and 1978 or if you’ve newly discovered the band and the albums. In fact, it doesn’t even matter if you’re a Styx fan at all….yet.

It all started back in the early 1960’s when Chuck and the late John Panozzo got together with another kid on their Chicago block named Dennis DeYoung and started to play a little music. By 1970 guitarist James “JY” Young joined the band, and they recorded a few minor albums. In 1975 their first hit Lady would put the band on the map and when Tommy Shaw joined as a singer/writer/guitarist for the Crystal Ball album, the top of the pop charts would be the band’s new neighborhood for the better part of a decade. There’s little doubt that the band peaked in the late 1970’s with The Grand Illusion and Pieces Of Eight. It’s amazing how many hit singles came from just two LP’s: Come Sail Away, The Grand Illusion, Fooling Yourself (Angry Young Man), Blue Collar Man, Sing For The Day and Renegade. Recently the band has cashed in on those glory years by performing a world tour of those classic albums live and in their entirety.

The band’s changed since the albums were released. Dennis DeYoung and Tommy Shaw have both had stints of running the band without the other. Now Dennis is gone, apparently for good, and has been replaced by Laurence Gowan, a Canadian musician who came to my attention over 20 years ago. I have several of his hard-to-find CD’s and have loved his music for years. John Panozzo passed away, and his brother Chuck isn’t really doing so well these days. Chuck’s been replaced by Ricky Phillips on bass. Chuck does make an occasional appearance for a couple of songs, but it’s sad to say and see that he looks rather worn out. While it was great for the guys to welcome him along, I was bummed by his look and lack of energy. He was an important part of the band, and I would absolutely have loved seeing him back in form. The drums on this tour are handled by Todd Sucherman, who replaced John when he became ill.

While I was eager to review this disc, there was always that nagging thought in the back of my head that says you really can’t go back. With new members and a lot of years and miles under them, I was afraid the band would be unable to recapture the magic that those two albums have held for me and millions of other Styx fans. Boy, was I in for a surprise. Gowan sounds so much like DeYoung at times that if you close your eyes, you’ll swear it really is him. Tommy Shaw has aged quite well over the years. He looks great and still has the energy and passion I remember when I first saw them live in 1977. I still have a guitar pick he threw into the audience. By the way, he still does that. The band played these songs as flawlessly as possible. All of those little nuances were recreated perfectly. You will relive the first time you heard these albums throughout.

The concert is accented with the typical video board and a rather conservative stage set-up. In fact, one of the big differences you’ll note, if you ever attended a show, is how much the stage reflects 2011 technology while the music takes you back to 1977/8. No more patch cords all over the stage floor. The band moved about quite freely. These guys just don’t look like they’re in their 60’s. The release is about as perfect as possible. See, you really can go back.

The concert is presented in its original aspect ratio of 1.78:1. The 1080p image is arrived at with an AVC MPEG-4 codec at an average 30 mbps. The picture is sharp. You can see the sweat rolling off the band’s faces. Remember I talked about catching a Tommy Shaw guitar pick? I used to tell people how amazed I was at how thick his picks are. In close-up shots you can actually see that he still uses a very hard gauge guitar pick. The colors are brilliant as the lights accent the songs. The picture is pretty much flawless.

The DTS-HD Master Audio 5.1 is the best of the options and brings a clarity that these albums never had before. There’s a CD available, and I’m bummed Eagle Rock didn’t slip one of those to me. I’d love to be able to listen to this one when I can’t sit and watch it. The separation is amazing. All of the vocals and instruments come through with their own dynamic ranges. That’s partly a very good sound man. As a musician myself I know how important the guy running the board is. Thankfully, their efforts weren’t wasted on a poor master here.

Putting On The Show: (29:19) It’s about time that the road crew, what we used to call roadies, get some spotlight time. This feature introduces you to those hard-working folks.

The show opens with a Star Wars-style text crawl to put you in that 70’s mood. It wasn’t necessary. The music did that just fine. I’ve seen Styx three times over the years live. Twice during the 70’s and once in a reunion along with Kansas. The last time I saw them Tommy and Dennis hugged on stage and made a remark something akin to “I bet you never thought you’d ever see that again”. It was a moving moment in the concert, but alas the only downer to this release is that Dennis and Tommy can’t get along. I know how hard it is to run a band with more than one leader. It really doesn’t work, and it’s doubtful we’ll see them together again. To think otherwise really is “A Grand Illusion”.

Gino Sassani is a member of the Southeastern Film Critic's Association (SEFCA). He is a film and television critic based in Tampa, Florida. He's also the Senior Editor here at Upcomingdiscs. Gino started reviewing films in the early 1990's as a segment of his local television show Focus. He's an award-winning recording artist for Omega Records. Gino is currently working on his 8th album Merchants & Mercenaries. Gino took over Upcomingdiscs Dec 1, 2008. He works out of a home theater he calls The Reel World. Favorite films: The Godfather, The Godfather Part II, The Body Snatcher (Val Lewton film with Karloff and Lugosi, not the pod people film), Unforgiven, Gladiator, The Lion King, Jaws, Son Of Frankenstein, The Good, The Bad And The Ugly, and Monsters, Inc.
Are You The Real John Carter? Walt Disney Pictures Is Looking For YOU. The Woman in Black