Posted in: No Huddle by Archive Authors on February 6th, 2012 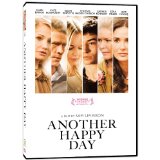 It would be nice if we were to get films as good as The Graduate from time to time. That’s asking a lot, but it would be nice. Another Happy Day is no The Graduate, but nothing is. Nothing could make such a seismic hit to a generation again. At least, I don’t think so. Another Happy Day did win the Best Screenwriting award at the Sundance film festival, and it seems well deserved. The film has a great cast, and you usually only get that if you have a great script or you spend a billion dollars. This film is clearly a small labor of love that did not set the world on fire. That’s probably because they did not spend a billion dollars to promote it.

It is sharply funny while dealing with painful issues. The family is getting together for a wedding, but it is really just going to cause everyone to pick at old wounds.

The film is about Ellen Barkin’s attempts to do damage control as various family member’s emotional dysfunctions crash into each other, or maybe Barkin is just hyper-sensitive and is heading for a complete nervous breakdown. The film is reminiscent of Rachel Getting Married where family members try to forget painful past memories and come together for a joyous wedding, but from the beginning of the movie we can see there is major trauma just waiting to bubble to the surface.

I’ll talk about the cast and director first. The director is Sam Levinson, who is the son of a great Oscar winning director, Barry. I am noticing this trend of directors spawning directors, most notably in the case of Ivan Reitman’s son, Josh, who has had a string of successes (Juno, Thank You for Smoking, Up In The Air, Young Adult). Sam Levinson is just starting, and it’s not bad. Being a Hollywood insider certainly can give you access to talent, which is on display here. George Kennedy and Ellen Burstyn play Barkin’s parents. Kate Bosworth is her daughter. Thomas Haden Church is her ex-husband, and Demi Moore plays his new wife. Even smaller roles like her mocking sisters are handled well by accomplished actors Diana Scarwid and Siobhan Fallon. Jeffery DeMumm plays her current husband, and you can see what attracted this high caliber of talent to what was a little bit of a vanity project……juicy roles and fun lines. They liked the script; he was an unproven quotient as far as directing, but they knew he could go home and get advice from his dad.

The film is all about family dynamics, especially in a somewhat privileged world. We have seen many films about upper- middle-class rich white people struggling with their neuroses over the years. I already mentioned The Graduate which has a somewhat aimless young man central to the story, which is the case here. Ezra Miller (We Need To Talk About Kevin) is one of the sons who is a little mentally unhinged and somewhat of a drug abuser. He sarcastically provokes almost everyone all the time. The grandfather (Kennedy) is senile and in failing health. The ex-husband (Church) is obsessed with building a bridge with his estranged and self-abusing daughter (Bosworth). His new wife (Moore) is aggressively trying to assert dominance over every aspect of the proceedings. There are many more threads woven through the film that lead to climactic events at this wedding.

It should be obvious that there is a lot of misery in these characters. There is probably too much. It is essentially a comedy about really miserable people. Almost everyone is unpleasant in some form. Ultimately the film is a good try for a first time director, but some of the fine details that might have smoothed the rough edges of this work have not been tended to. The raw materials are there, the talent is definitely there, and they do good work, but these raw materials are a little too raw.  This wasn’t far off from being an award-winning film, but the director’s inexperience was probably the culprit of it not quite making the cut.

Barkin was a behind-the-scenes catalyst to getting the film done, and her performance is certainly attention-getting but a little too shrill in the final analysis. I still think it was all worth the effort as a worthwhile near miss. Everybody gave their best, and Sam Levinson should get lots of pointers from his Hollywood friends and family for his next go around.

The Double The Whistleblower (Blu-ray)