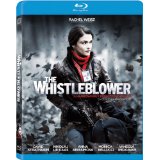 “I was dumb enough to think I’d be joining some elite police officers here. I don’t know who these people are.”

Those words come from Kathryn Bolkovac (Oscar winner Rachel Weisz), a Nebraska cop who accepts a high-paying gig as a United Nations peacekeeper. The film, inspired by true events in 1999 post-war Bosnia, follows Bolkovac as she discovers a human trafficking/sexual slavery ring with an insidious connection to International Police Task Force personnel, including some from the United States.

Although there have been several films and documentaries that have dealt with the subject (including Oscar-winning documentary Born into Brothels), Bolkovac’s quote also made me realize that what the majority of the movie-going public knows about human trafficking, they probably learned from Taken.

This film, however, is a far cry from the Liam Neeson actioner, despite the misleading shot of a determined-looking Weisz carrying a gun on the Blu-ray cover. (I honestly don’t remember Weisz’s character ever handling a weapon.)

As much of a blast as Taken is, director Larysa Kondracki, who also co-wrote the screenplay with Eilis Kirwan, is interested in a more detailed, methodical approach to the subject in her admirable feature-film debut. The scenes depicting the human traffickers’ cruelty (including a particularly nasty one involving a bloody pipe) are handled with great care, refusing to shy away from the brutality those girls experience, yet stopping well short of being exploitive.

Kondracki also manages to keep things interesting from a dramatic standpoint with a big assist from her excellent lead actress. Although we barely see a few minutes of Bolkovac’s pre-Bosnia family and professional life, Weisz makes us believe how her sense of duty, plus her love and connection to her own teenage daughter, would galvanize her and give her the resolve to challenge her superiors and colleagues. Her performance is a satisfying slow burn of restraint and increasing outrage, so when Bolkovac finally has her emotional explosion near the end, it feels earned.

Weisz gets help from a couple of overqualified cast members, including Oscar winner Vanessa Redgrave (Julia) and Oscar nominee David Strathairn (Good Night, and Good Luck), who play two of Bolkovac’s precious few allies. Redgrave and Strathairn, along with international superstar Monica Bellucci, have so little to do in their brief scenes that their presence is actually a bit distracting. (Then again, I can’t really criticize these actors if they want to make glorified cameos in a movie that deals with a topic important to them.)

Besides, there are other truly impressive performances to enjoy from lesser-known (at least in the U.S.) actors, including Roxana Condurache as Raya, a potential key witness for Bolkovac, and Jeanette Hain as Raya’s heartbroken mother.

The Whistleblower is presented in its original aspect ratio of 2.35:1. The 1080p image is arrived at with an AVC MPEG-4 codec at an average of 33 mbps. The majority of the movie is set in post-war Bosnia, so most of the external visuals prominently feature an intentionally grayish and grimy aesthetic. In other words, not the best showcase for colors. However, the dark, dank scenes depicting the imprisoned girls or an overwhelmed women’s shelter contrasted nicely with the brightly oppressive offices of the bureaucrats (who range from hostile to useless) Bolkovac encounters.

The DTS-HD Master Audio 5.1 track has a handful of languages to contend with (some crucial scenes don’t feature English subtitles, so be ready to switch them on), but the dialog comes through quite clearly (the parts you can understand, at least). The film score and ambient noise are unremarkable.

“Kathy Bolkovac: The Real Whistleblower” (5:31) The real Bolkovac pops up, along with the rest of the cast, for a too-brief discussion of her personal story and the importance of raising awareness about human trafficking. I actually wish this featurette had been longer and focused more on Bolkovac. Instead, almost as much time is spent gushing over Weisz (well-deserved gushing, but still) as is dedicated to Bolkovac. Also, for some odd reason, the audio for Weisz’s interview is considerably worse than anybody else’s.

The movie may not offer many satisfying fireworks (most of the actual whistleblowing is chronicled through a postscript before the end credits) or tall, middle-aged Irishmen kicking butt. Instead, The Whistleblower is an engaging, sensitive exploration of an under-explored subject matter. The Blu-ray, meanwhile, is as unspectacular yet effective as the movie itself.