Posted in: Disc Reviews by William O'Donnell on February 6th, 2012 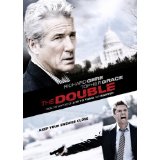 Evidence has revealed the possibility that a Soviet Assassin code-named “Cassius,” thought to be long dead, is still at large after a US Senator is murdered. A veteran CIA operative (played by Richard Gere) is teamed up with an enthusiastic young FBI agent (played by Topher Grace) who has studied and obsessed over Cassius’ actions since his days at Harvard.

This is the sort of film that cannot be talked about at great length without revealing the many important secrets it contains. This is especially frustrating because it is those same secrets that only add to my appreciate of the film because it adds layers to all of actor’s performances when you know the lies they have been, and continue to have. That being said, multiple viewings could make for some interesting observations for those that enjoy this sort of spy thriller film.
Cold war rivalries and spy games are resurrected for the central plot of this film. The CIA and FBI are forced together to investigate the actions of Russian spies, both new and old. There are conversations outside the White House, War room style meetings, cat-and-mouse games between dangerous men and many other hallmarks of the spy genre.

Gere and Grace do decent jobs with their performances but still do not deliver enough to dive over the many plot holes that arise. The motivations of these characters becomes boggling once more secrets get revealed. Their sympathies and decisions are uncharacteristic of any previous spy-film characters I have seen and the actual spies within the film seem more like method actors who got over their heads than cold and calculated agents who are willing to do anything for their mission(s).

The score by John Debney is typical of these films, largely consisting of piano or strings with a lot of echo or reverb added, but the additional song choices are odd and sometimes obtrusive. While trying to immerse myself in the film I would be disturbed by something that is distinctly Western (think Ennio Morricone) or something high energy that would be better suited for a blockbuster action film’s trailer.

1080p Widescreen 2.35:1. The shadows in this film lose their cleanliness, revealing some fuzziness. Otherwise, the daylight scenes are very clear and demonstrate HD decently.

DTS-HD Master Audio 5.1. The dialogue and effects are clear but there are some balance issues between the music and the rest of the sound. This issue appears again in the special features, so keep that volume remote handy if you want to risk keeping it loud.

Subtitles available in English and Spanish.

Commentary by Writer/Director Michael Brandt and Writer/Producer Derek Haas: Both men always have something to say, and it is not just mundane anecdotal banter about how much they like the actors or the commentators simply watching the film and giggling without saying anything much at all. If you were on the fence about this film, the manner by which these men speak of their film might sway you.

Interviews: The lead cast, producers and directors speak eloquently about the film and just ravage us with spoilers left and right. Avoid this until WELL after you see the film.

If you are not wanting to invest too much thought into it, this film can be plenty entertaining. Be thankful Shia Lebouf didn’t find his way into Topher Grace’s role, as the cast couldn’t manage the surplus smugness.

The HD quality is up to par for Blu Ray.