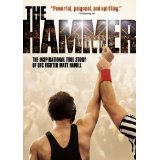 People — especially nerds like me, who have been writing about movies for years — often complain about the predictability and clichés that seem to be permanently embedded in certain types of movies. However, the not-so-dirty little secret is that we enjoy wrapping ourselves up in that comfortable blanket of familiarity more often than we’d like to admit. Horror movies and romantic comedies are certainly among the most notorious offenders, but I’d make the case that sports movies belong at the top of the list.

Consider Moneyball: some consider the Oscar-nominated drama a traditional “sports movie” by only the loosest definition, but even that film was beholden to certain recognizable beats. For example, there needed to be a “Big Game” toward the end of the movie, even though we’re talking about a team that lost in the first round of the playoffs and their dramatic victory was winning their 20th regular season game in row. (Not exactly the highest dramatic stakes.)

The first half of The Hammer — which doesn’t really explain why Matt’s grandfather thought it would be a good idea for him to take up wrestling and features repetitive arguments between Hamill’s mom and grandpa about Matt’s future — is considerably worse than the second.

Once Hamill suffers a humbling setback and attends a college that caters more readily to deaf students, the movie somewhat breaks away from its sports movie constraints. Besides Barry (basically doing a crusty Burgess Meredith imitation from the “Rocky” movies) the main cast includes three deaf actors who acquit themselves quite nicely.

Harvard — looking a bit like a more thoughtful, less upbeat Michael Phelps — does a pretty solid job of holding the movie together without getting anything terribly exciting to do. (The wrestling sequences aren’t bad, but not anything to write home about either.) Matt doesn’t fit in back home (where he’s the only deaf person) or in school (since he’s never been around other deaf people) and Harvard underplays the frustration nicely. I also liked the fact that Oren Kaplan and writers Eben Kostbar and Joseph McKelheer didn’t sanctify their main character just because he had to overcome a disability. In fact, Matt was flat-out an inconsiderate jerk a couple of times.

Shoshannah Stern plays Kristi, the love interest who is required to be a bit of a wet blanket, but Stern brings necessarily dramatic heft and has solid chemistry with Harvard. Meanwhile, Michael Anthony Spady (as Hamill’s best friend, Jay) livens up the proceedings from his very first appearance and proceeds to do the same in each of his subsequent scenes.

Kaplan also employs a few storytelling tricks, some more successfully than others. For example, the use of subtitles is really very clever: when Hamill can’t understand what someone is saying or signing, the word remains blank and leaves the audience to puzzle out what is being said from snippets  (just like Matt has to). On the other hand, the movie would sometimes randomly feature a muted, distorted soundtrack to make us feel what it was like to be Matt when someone was trying to talk to him. I don’t have a problem with the effect itself — I just wish Kaplan had used it more consistently and REALLY put us in Hamill’s head. (Though I can understand why you wouldn’t want to intentionally put your audience in such an unpleasant position.)

On a more basic level, I just liked watching a story about characters we don’t usually get to see depicted on-screen. The second half of the movie managed to be reasonably interesting even through long stretches of silence when characters were doing little more than signing to each other. (Bonus: I can almost guarantee you’ll know at least a little sign language after you watch this movie.)

Since the movie doesn’t really seem incredibly invested in exploring what made Matt Hamill a great wrestler and the final act is a loose remake of The Karate Kid, the fact that The Hammer brings under-seen and remarkable characters to the forefront is its best accomplishment.