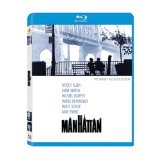 It followed Annie Hall by two years, once again reshaping the mass market’s notion of serio-comic romance. With its bittersweet plotting and cynical one-liners, Woody Allen’s Manhattan was an even bigger commercial success than its Oscar-winning predecessor. Its current incarnation on Blu-Ray offers the best chance yet to revisit its eccentric brilliance.

With spectacular picture-postcard compositions (shot by the great Gordon Willis),  spine-tingling George Gershwin orchestrations, and a plot line that would freak out most parents with teenagers, Manhattan is as unlikely a hit as any Allen work. Indeed, the filmmaker himself was reportedly unhappy with the final product. We have no idea why, and you won’t get any hints on the new disc. As usual with the Wood-man’s videos, there are no extras beyond a theatrical trailer. So the film must speak for itself, and it does so most eloquently.

Certain early-Allen traits are unmistakably out front. He plays a neurotic nebbish – a divorced struggling novelist, no less — concerned mainly with his own gratification and insecurities. His friendships and romances play out with an urbane blend of venom and honey, and his wry asides keep us afloat in his sea of self-pity.

Isaac Davis is the schlemiel’s name, and the film kicks off with a voiceover of him struggling with writer’s block. More pathetically, he’s trying to devise an opening paragraph by describing his love of New York in self-flattering terms, comparing the city’s grandeur to his own magnificent sensibilities. It’s a dryer humor than the old-school punch lines that open Annie Hall, and that darker cinematic complexion remains consistent for the entire film.  On his fifth attempt, Isaac comes up with this: “Chapter One. He was as tough and romantic as the city he loved. Behind his black-rimmed glasses was the coiled sexual power of a jungle cat. — Oh, I love this. — New York was his town, and it always would be.”

At that moment, the New York Philharmonic, conducted by Zubin Mehta, arrives at the soaring, massive chords that define Gershwin’s “Rhapsody in Blue.” All through this introductory passage, the screen is filled with monochromatic postcards – loving views of distinctive Big Apple scenes. Indeed, all of Manhattan has been often described as a visual tribute to the city’s greatness. Willis, who also shot The Godfather Parts I and II, makes Manhattan worth watching with the sound off, so compelling are his black-and-white images and so stunning is his mastery of darkness as a storytelling tool.  (Trivia note: Allen forbade any pan-and-scan for video, and the Manhattan VHS was the first home video released in widescreen only. Rental customers occasionally complained about the blank space above and below the image, as if they were somehow being cheated. Yes, I worked in a video store in the early ‘80s.)

Isaac, age 42, is dating a 17-year-old high school beauty named Tracy. (I know, this could be a harbinger of Allen’s real-life romantic future.)  In a performance that she never surpassed, Mariel Hemingway beautifully portrays Tracy, a high-school kid wise beyond her years, who is Alvy’s girlfriend when the story starts. The twist here is that she’s more mature, more self-aware, more secure than her aging paramour. While Isaac is as cynically self-absorbed as Allen’s Alvy in Annie Hall, he’s even more tone-deaf to the feelings of his girlfriend.

When Isaac meets the mistress of his best friend Yale (Michael Murphy), he is at first put off by her rather snide, shallow manner. But Mary (Diane Keaton, creating a totally different persona from her Annie performance) starts to grow on him, and she gravitates away from Yale and toward Isaac, who soon splits with Tracy, breaking her young heart.

In the film’s coolest complication, Isaac has a hostile ex-wife (Meryl Streep in a brief but memorable film debut) who is writing a devastating tell-all about their nasty breakup.

Manhattan is presented in its original aspect ratio of 2.35:1. The 1080p image is arrived at with an AVC MPEG-4 codec at an average 35-40 mbps. If you’ve admired the film in other formats, you’ll appreciate the Blu-Ray’s density and contrast. While the DVD version was acceptably sharp, the Blu-Ray has even more remarkable definition. There are scenes – the planetarium sequence comes to mind — in which you may see only slivers of light, with a conversation conveyed in classic chiaroscuro. People’s faces convey emotional range beyond dialog. Film students will reference Allen’s well-known admiration for Ingmar Bergman. Oh, yes, there is a stirring story behind the stunning scenery.

The DTS-HD Master Audio 2.0 is a credit to MGM for the decision to interfere only minimally with the film’s original intent. I know a lot of you techies out there want pop, but what you get here is an intimate atmosphere that should not be tampered with. You hear the dialog with perfect precision. The work that was done serves only to clean up age-related deficiencies and boost the low end just a bit.

There are plentiful awkward moments, comic detours and tart gags, but they can’t soften the gut-punch emotions that finish the film. The final lines offer us a way to reconcile the story’s conflicts for ourselves. If you already own Manhattan on DVD, replacing it with the Blu-Ray isn’t essential. I would recommend you upgrade your Annie Hall disc first, because the quality difference is more marked. But if all you have are fond memories and a grainy videotape, you’ll be delighted that this sumptuous gem is finally available.