Posted in: Disc Reviews by William O'Donnell on February 15th, 2012 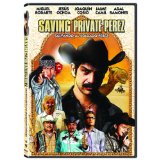 Mexico’s most powerful crime lord, Julian Perez, wishes to redeem himself in his mother’s eyes. Her wish is for him to find his estranged younger brother and return him home to Mexico. Julian agrees before knowing that his brother has been taken hostage while he was serving with the US Army in Iraq. A misfit team of mercenary types are assembled to infiltrate Iraq and fulfill Julian’s vow to his mother.

The characters in this film all look like caricatures of 1970s cop movie characters merged with hipster cowboys. Obviously a team of warriors that look this unusual could only exist in a comedy. And indeed, this film is billed as an action-packed comedy. Though I fear that much of the more subtle humour is lost in translation for me as I found most of gags existed in the aforementioned costuming of the characters. Then again, not all was lost on me. Some of the gags, both physical and verbal, were effective. In fact, I am particularly partial to the reoccurring joke about their chosen war cry of “Tomatoes!”

This is a rather slick production, where the fight sequences compete with anything churned out of Hollywood these days and the sets are quite deluxe. So much time was spent on making this film esthetically compete with Hollywood films makes it feel more like an action film with humour injected, instead of a comedy with a few explosions. The intention was to be more like the latter, perhaps like a Mexican Hot Fuzz, but while the humour is indeed silly and abundant, the pacing is often too contemplative, serious, and there is too much distance between scenes that are strictly comedic. Death bed vows, crime lord turf wars, soldier executions…these are not fodder for comedy and are treated with utmost seriousness when they occur.

Each characters is given a brief introduction, most of which includes the dispatching of a couple of nameless goons to demonstrate their fighting capabilities, then do not develop any further once placed into the main plot. Only Julian is offered any sort of true character arc, where we see him grow into a new person towards the end of the film.

Widescreen 1.78:1. Despite taking place in multiple desert countries, the frame does not look too dull when smothered in sun-bleached sand tones. A nice transfer to DVD that visually competes with American action films (as mentioned before).

Spanish Dolby Digital 5.1. The music and dialogue are mixed well and each speaker delivers.

“The Making Of Saving Private Perez”: I was sincerely hoping for a behind-the-scenes look at the film but all we get is about 3 minutes of clips fit for a trailer and the producers individually commenting about how big a production this was. That’s all. Disappointing.

A lot of guns are strapped to some colourful characters. The story loses momentum from time to time due to a lack of focus about whether to be funny or just ad more violence. It remains an amusing tale and a fun demonstration of Mexico’s bigger budget film capabilities.