Posted in: Disc Reviews by David Annandale on February 15th, 2012 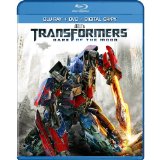 Back when I reviewed the original Blu-ray/DVD combo release, I said that those wanting special features should wait for the inevitable double-dip. Well, here it is, and so loaded with features that they get a Blu-ray to themselves.

Following the events of Transformers: Revenge of the Fallen, the Autobots are working hand-in-mechanical-glove with human authorities (in other words, the apparently all-powerful CIA), keeping close watch for Deception activity, but also helping out in human-on-human conflicts. Meanwhile, Shia LaBeouf has traded in improbably hot girlfriend Megan Fox for the equally improbable Rosie Huntington-Whiteley (an improbability that the script does have some fun with). He is also out of work and dismayed at not being given due consideration as a saviour of the planet.

Romantic and job-related misadventures will conspire to keep LaBeouf’s nose out of joint for a good stretch of the film’s running time, but other, more (literally) earth-shaking events are afoot, as a decades-old secret from the original moon missions emerges, as does the Autobots’ former leader, Sentinel Prime (voiced by Leonard Nimoy, and looking a lot like the man, too). Bust as Sentinel’s return seems to presage a new dawn for the Autobots, a complex web of conspiracies and betrayals climaxes in the most devastating Decepticon attack yet.

As for the human characters, they feel more extraneous than ever. While John Malkovich’s shameless slice of ham is entertaining, and Ken Jeong steals the film during his brief comic turn, it is really hard to give two figs for LaBeouf and his concerns. As for Huntington-Whiteley, her initial appearance says it all: nothing but a pair of bare legs walking on tip-toe for maximum walking-in-heels effect. She is nothing more than another aesthetically pleasing object for Bay’s camera, polished and lit to a high sheen. Though her situation is the most egregious, it does rather neatly encapsulate the basic situation: the robot characters are far more interesting, developed and believable than the humans.

For those who don’t have 3D, as I said above, the film still looks astonishingly good in 2D. As integral as 3D was to the theatrical experience, there are no awkward reminders of what is missing (such as silly jabbing at the screen). The image is fetishistically sharp, to the point that the robots look even better than they did on the big screen, though the humans sometimes look a bit more human than before, thanks to the unforgiving HD precision. But back to the FX, since they’re the selling point. The detail work pops out beautifully, and I noticed some touches that had escaped me in the theatre. One such example is a nice moment when Optimus and Sentinel are talking in a desert setting, and the image of one is reflected in the armour of the other.

Colours are gorgeous and rich enough to dine out on. The contrasts are excellent, too, though I did think the film looked just a little bit darker than I remembered it. Grain is non-existent, and the AVC codec maintains as stunning rate, averaging about 28 Mbps, but often going quite a bit higher than that. The aspect ratio is the original 2.35:1 anamorphic widescreen.

The 3D disc is provided here. Expect the same elaborate structural 3D that you saw in the theaters. The image is particularly deep as you explore the crashed moon ship. There are some other moments that usually involves guns pointed your way that bring out the effect. The use of glasses does rob the image of brightness and you don’t really get the same levels of brilliant contrast. It’s nice that the disc is here, if you want it. I’ll stick to the standard Blu-ray here.

This, too, is something of a technological marvel. I have absolutely nothing but unqualified praise for the surround use. The placement of sound cues left, right, front and rear is impeccable and constant, providing an immersive soundscape that is just as explosive and exciting as the visuals. The score has an appropriately big sound to it, and the dialogue is perfectly clear. Where I do have a quibble is with the explosions and gunfire. The technical polish is such that these sound effects sound too clean, their digital origins betrayed by the perfect smoothness of their electronic delivery. The result is that some of the booms and bangs lack oomph. On the whole, though, terrific, engaging sound design.

Above and Beyond: Exploring Dark of the Moon: (1:50:46) This is the main feature, an in-depth documentary divided into five parts, dealing with development and design, filming across the US, the shoot in Chicago, the spectacular birdmen stunt (count me as being among those convinced on initial viewing that this HAD to be a special effect), and post-production and release.

Uncharted Territory: NASA’s Future Then and Now: (26:15) Pretty much as the title suggests, a consideration of what NASA has achieved and what the future might hold. This last is examined with not a little anxiety.

Deconstructing Chicago: Multi-Angle Sequence: Multiple options here, following two main paths. The first looks at the previsualizations of 12 scenes (running 17:05 all told). One can watch with previsualizations alone, with a comparison to the final shots, and with optional commentary by Michael Bay and previsualization supervisor Steve Yamamoto. The other 12 moments (running 18:36) concern the visual FX breakdowns. These too can be seen on their own, alongside the finished work, and with or without commentary by VFX supervisors Scott Farrar and Matthew Butler. The technically minded out there will love this stuff.

Art of Cybertron: A group of still galleries: Autobots, Decepticons, environments, weapons and gear, and ships.

The Dark of the Moon Archive: A collection of short featurettes. “3D: A Transforming Visual Art” (3:06) is an interview with Bay and James Cameron; “Moscow World Premiere” (2:29) is self-explanatory; “Birdmen Featurette” (2:28) takes us back to that stunt again; “Cody’s Pad” (2:07) made me a bit uncomfortable: Bay helps out a disabled man by getting him an iPad, and I don’t know whether to feel warm inside or horribly offended by the obvious shill; “The Sound of Transformers: Dark of the Moon” (6:17) is also exactly what the title suggests.

The Matrix of Marketing: The teaser and trailer are here, along with marketing galleries: posters, style guide, promo items and concessions items.

It looks great, sound great, and is a great deal of loud, stupid fun. And the extras are pretty comprehensive. This, then, is the properly deluxe package.