Posted in: Disc Reviews by Michael Durr on February 16th, 2012 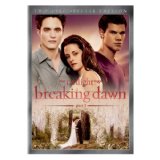 Somehow, I should have known that when my wife started to read the Twilight Series, I would eventually get dragged into watching the movies. The first one, I probably saw three times, the second one, only once. The interesting thing was that my wife was turned off by the movies and I am not sure I remember how the third one ended up. But low and behold, the fourth chapter of the series did not escape my grasp. Not because of my wife, but because of my webmaster knowing I am a glutton for punishment. Enter Breaking Dawn.

Remember kids, this is part one. The new thing in this day and age is if you are adapting a book to film and really want to place emphasis on that last book, you release it in parts. This is two fold, one there is usually a lot of information that needs to get onto screen (since books are more detailed than movies) and two, everybody involved wants to milk the cash cow at least one more time than they would normally be allowed. This only works by the way if the movie is ultra successful. See Harry Potter, and now of course Twilight.

Anyway, on to the review.

Edna St. Vincent Millay said “Childhood is not from birth to a certain age and at a certain age, the child is grown, and puts away childish things. Childhood is the kingdom where nobody dies…” We hear Bella Swan (played by Kristen Stewart moderate over the opening credits. After the moderation ends, we pan down to see Jacob (played by Taylor Lautner) who is very angry as he reads a letter. He goes all hulk smash, throws down the letter, rips off his shirt (audience “Woooooo” inserted here), assumes wolf form and runs into the forest.

As we pan to the letter, the same letter is being read elsewhere by Bella’s dad Charlie (played by Billy Burke). It is Edward Cullen (played by Robert Pattinson) and Bella’s wedding invitation. Meanwhile, Bella is trying to break in her wedding shoes as Alice Cullen (played by Ashley Greene) tries to tend to her. Bella looks to her left and sees Edward looking all emo on the balcony. Alice notices and tells Bella that she best go home and get some beauty sleep.

Bella runs home and when she reaches her bedroom, she is greeted by Edward. Darn that supersonic running of his. He has something to tell her, things about his past. Once upon a time he didn’t feed as he does now (off animals, PETA has issues with this and are staging a protest). He actually killed people for a time and fed off their blood. But those people were always murderers and bad people. Somehow, this is supposed to convince Bella that she shouldn’t marry him. It does not work.

Soon, this little party is broken up by Emmett and Jasper (played by Kellan Lutz and Jackson Rathbone) who want to take Edward away on a bachelor party. The two lovers kiss and part ways. It is off to dreamland for the future Mrs. Cullen. She dreams of her wedding day which quickly turns into a nightmare where the Volturi show up and then the whole human wedding party is devoured as Edward and Bella are covered in blood. I guess they did not order enough wedding cake?

Bella wakes up thankfully and goes to her wedding. She is greeted by Alice and Rosalie (played by Nikki Reed) who help her make the final wedding dress alterations. Still nervous, she is led down by Charlie to the altar. She loses her nervousness when she sees Edward. The preacher starts the ceremony (who by the way gets the award for most useless part in the movie since he says the first sentence and then Edward and Bella do the rest of the ceremony on their own) and it goes off without a hitch.

After some rather long and passionate kissing (which is probably just a wee bit uncomfortable to most of the wedding party since Bella is supposed to be all of 18 years old), we proceed to the reception. Speaking of uncomfortable, we get some very odd toasts from Emmett, Charlie, and Jessica Stanley (played by Anna Kendrick) among others. Then we get some dancing!! (cue the intermission music as I get my groove on. *does the robot*)

Meanwhile, Edward whisks Bella away to see her final wedding present. The final present turns out to be Jacob who could not bear to be at the actual wedding but wanted to see Bella and wish her the best. The wolfpack calls out to Jacob as he says goodbye remarking that Bella will probably not have a normal honeymoon and will soon be turned into a vampire. Bella says they are going to have a regular honeymoon, complete with lovemaking and she will not be turned just yet. Jacob suddenly goes all ballistic.

Woah, wait a second. Why does Jacob go ballistic over something that every honeymoon couple does at least once or twice? Because Edward is a vampire and Bella is a human. If Edward’s bloodlust erupts (jokes aside), he will probably rip Bella to shreds. And then she will die. (mostly because of shredding) I get all of this from my wife who is sitting next to me. Thank you dear. Jacob finally gets a hold of himself and then they part ways. Suffice to say that this will not be a normal honeymoon for the new couple.

This movie to me is different from the previous Twilights as the action or intensity does not come from some renegade vampire or the Volturi. All of the action actually comes from the wedding and the sub sequential honeymoon. There are a few staredowns and one real fight but neither are going to get the male audience any relief from the constant female oriented plot. In some ways, this one could be described as a chic flic but with vampires and werewolves. The other ones at least had some element of fantasy no matter how hokey it might appear.

That is the other thing too. This sucker (as with the previous movies) has a definite light of cornball. Even people who are familiar with Twilight will want to laugh when they flash up on the screen. It is almost too easy to go into detail here. I know some people will get on me, but there are things I liked about the movie. Taylor Lautner had some real character development for the first time in the series. Also, the makeup and effects crew should get a huge bonus. Some of the work they did on Bella was nothing short of amazing. Props, seriously.

The video is in 2.40:1 anamorphic widescreen presentation. The movie is quite beautiful using outdoor scenes and lush locales. The detail is certainly there and you can see so much in the actor’s faces and body language that it does enjoy a layer of appreciation not seen in many movies. My only problem was that in certain darker scenes, it was really hard to tell how the action was unfolding. Therefore, the video is not perfect, but it is great more often than not.

For the audio portion, we get a 5.1 Dolby Digital English and Spanish track (there is also a DVS track thrown in). Sound is great here and pushes the Dolby Digital format to about as good as it can get on DVD. Dialogue is clear and there should no problem comprehending what is going on. Action is brisk here, but when used there is no shortage of surrounds. Nice track and a great nod to the environment in the movie. Subtitles are also in English SDH and Spanish.

The final chapter in the movie series, Breaking Dawn Part Two is set to debut this fall. I am sure much like the last Harry Potter that it will do great business here in the states and also around the world. Breaking Dawn Part One is a light film and merely sets the stage for lots of things to be wrapped up in the finale. As such, it often comes off boring with a usual spoon of cornball. But Twilight fans should lap up this one just like the rest.

The two disc package has its hits and misses. There is excellent video and audio and a whole lot of extras (even if the Jacob and Edward fast forward stuff is really silly). The commentary and documentary are both top notch. The two disc package comes housed with a bland slipcover in an eco case. Recommendation really lies on whether you are a fan or not.

I do plan to watch the last one in the series (mostly for completion sake), but I can not say I am thrilled or eager to see it. Be sure if you are somebody who is not “into” Twilight that you take along a guide. Like a wife, girlfriend, best female friend. Thanks certainly goes to my wife for explaining out some of the finer points of the movie. I still am not in love with it (She personally rather stick to the books), but at least I understand it. Enjoy.

Michael Durr has been reviewing movies for the better part of fifteen years now. He primarily enjoys thrillers, sci-fi, animation and even a little courtroom drama. His favorite films include Escape from New York, the Goonies and anything with Alyssa Milano. When he’s not praising Kurt Russell as the greatest actor of our time or scratching his head over a David Lynch flick, he’s spending time at home in Texas with his lovely wife, Lori and his amazing son. How they put up with him is a mystery, but even Basil Rathbone doesn’t have the time to solve that one.
Saving Private Perez The Dead (Blu-ray)