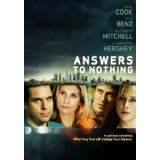 One of the great things about the movies is that it shows you things you would never see. You get to see a facsimile of people living their lives and get to experience a pertinent slice of their personal problems. We can be entertained by it and we can learn from it. It takes us out of our personal life and our personal problems. The closer to the truth a movie is the more we can identify with it. I have seen so many movies, but I know it just scratches the surface of the life stories out there. There use to be a movie and a TV show with the tag line, ”There are 8 million stories in the naked city”. I might be off on how many million that was, but there are nearly 8 billion people on the planet, and each of them has a story.

Answers To Nothing is about a bunch of people all living separate lives, and we get to see how they all intersect. It takes place in LA, and that makes it similar to a lot of movies about people who live in LA, most notably Best Picture Oscar winner Crash. These people’s lives are going to crash into each other, but we just don’t know how. Answers To Nothing takes its time introducing various characters, but clearly the most dominant story thread is a police investigation of a young girl who is missing. Julie Benz is the detective, and she is frustrated because she is certain that the person of interest (Greg German) in the investigation is guilty, but she has no real evidence. Dane Cook and Elizabeth Mitchell (Lost) are trying to have a baby but seem to be having a fertility problem. We know this because Cook has a girlfriend help him get a sperm sample for the doctor. There are many other lives introduced, and we slowly wait for the forces of circumstance and coincidence to intersect and converge. The performances are low-key and naturalistic. The details are small but telling. There is a woman who is struggling to take care of her severely brain-damaged brother and is fighting a custody case using Elizabeth Mitchell as the lawyer. There is a depressed cop (Eric Paladino) grieving a death who walks the beat in the neighborhood he lives. There is a black woman who writes for a comedy show who looks down on a lot of people of her own race. There is the young songwriter who has regular sex sessions with Dane Cook. There is a rather anonymous man who place computer games and works at a school who seems slyly obsessed with the media reports on the missing girl. There is a man who is looking for a missing dog who is always sitting looking at people walking their dogs in the dog park. Dane Cook thinks his mother, Barbara Hershey, is pathetic for thinking his father is coming back after nine years.

If the story seems unfocused, it is. It takes a long time to figure out what’s going to happen. Will the girl be found, and was she murdered? Will Dane get caught cheating while trying to get sperm for his baby-obsessed wife? Will the girl he’s cheating with ever translate her pain into song? Will the parent’s of the sister and brother ever forgive her and her desire to take care of a brother it seems she has wronged? Will Dane Cook be able to help the black woman with her therapy sessions? Will the sister be able to wheel her brother through a marathon that he always used to run? Will the creepy guy who plays computer games ever say what is on his mind? What exactly is the nature of the cop’s tragedy?

It turns out the creepy guy has something on his mind different than we expected. It turns out lots of things that have been revealed are deceptive. Then the climax we’ve all been waiting for happens.

What it means is that there are 8 billion lives on the planet and they are all important. They just seem unimportant as we go through the process of living them.

Answers To Nothing lives up to its title. There are no answers, just people living their lives.

The Way History of the World in Two Hours