History of the World in Two Hours 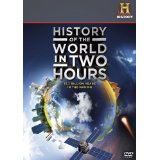 3.8 billion years ago, something happened all over the planet. Bacteria. This was the beginning of life.

In fact today each one of us has more bacteria in and on our body than there are people on the planet. Bacteria create a waste product which is pretty important as well, oxygen. Eventually bacteria learn to live on oxygen.

the oceans and continents we know today. During the dinosaur era, mammals were small, unimportant creatures, but another massive cataclysm wipes out the dinosaurs and allows the little mammals to grow and thrive and eventually walk on two feet.

Ten million years ago, everything on the planet starts to take a familiar shape and  geography. Seven million years ago grass starts growing and apes leave the trees and start walking around on the ground. 2.6 million years ago, proto-humans or hominids start picking up rocks made of silicon, which can then be chipped and shaped into tools and weapons much like we saw in 2001: A Space Odyssey. This was the famous Stone Age. What’s next? Fire. 800,000 years ago we can control fire much like the people today learn on the TV program Survivor.

200,000 years ago the early modern humans’ larynx develops and allows complex vocal communication. Humans then begin to explore the largest land mass, Afro-Eurasia.  Then another ice age begins and man advances to Europe and Australia and The Americas. 20,000 years ago we start to do cave drawings to show and communicate what we see. Sea levels have dropped 300 feet exposing landmasses like the Bering bridge to Alaska.

So this last 20,000 years is just a small fraction of the history of the world.

10,000 B.C., and man has ventured to all the major landmasses except for Antarctica. Humans have gone everywhere and colonized the world. 4000 years ago nomadic peoples in Asia domesticate horses. Horses started in the Americas and died out but before they did they had crossed over to Asia. Christopher Columbus was the first to re-introduce horses to America. Another animal to escape extinction in North America was the camel. The camel has not been reintroduced to the U.S.

Then settlements and early cities start to take hold and these last 6000 years start to become the recorded history we are all so familiar with. Farming and domesticated animals become the norm.

So much has been written about these 6000 years that lead up to the present day, so that’s what important to focus on. The donkey is important because it gets the beginning of a world economy going. Another thing that is important is the births of Buddha, Jesus and Mohammed. The invention of the wheel was a big deal.

Metal smiths learning to work with iron is another one. Giant hordes of empire-thirsty armies gorge on thousands of miles of land and colonize. Unfortunately disease-destroys some of these greedy empires. Constantine converts to Christianity in 312 A.D. Islam becomes a powerhouse three centuries later.

A Chinese guy in 800 A.D. combines carbon, sulfur, potassium, nitrogen and oxygen to create a gunpowder explosion. Cannonballs are first used against Christian crusaders. Global warfare proliferates, and the potential threat of nuclear extermination hangs over the head of everyone on the planet.  If you have gone to school, you can fill in the rest of the history of this planet right up to what kind of sandwich I bought yesterday.

This program is a very well spent two hours.

Answers to Nothing Santana – Live at Montreux 2011 (Blu-ray)