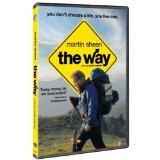 “You don’t choose a life Dad. You live one.”

The call no parent ever wants to get, “There’s been an accident. Your child is dead.” When his son Daniel (Emilio Estevez) dies unexpectedly in the Pyrenees, Tom (Martin Sheen) flies to France to claim his body. But instead of returning immediately, he stays to complete an 800-kilometer pilgrimage across the Spanish countryside that his son couldn’t.

Rife with moral-driven vernacular, The Way film pays homage to Estevez’s Spanish roots through  the framework of Daniel’s reaching words to his father, “You don’t choose a life Dad. You live one.” When Tom recognizes his son in the French morgue, reality surrenders his tears. How did he die? We don’t know, but he probably got caught in the unpredictable mountain weather.

Tom is a widower and conservative opthamologist who seems to hard-drive his focus on work to deal with pain of his loss. When Daniel decides to drop his PhD program and see the world, the blood divide widens. Their tensioned drive to the airport is the last Tom sees of his son alive.

The age-old parent-child apex of making wise choices vs. shirking adult responsibilities is suddenly postulated and hanged in a haunting tragedy. Tom returns to the policeman (Tchéky Karyo) the next day requesting Daniel’s body be cremated so they can finish the journey together. He starts walking several-hundred miles of Basque countryside with his child at his hip, in a metal can.

Orange, blue, yellow and green—The Way of St. James leads pilgrims towards a cathedral in Galicia of Northwest Spain. Legend marks it home to Saint James the Apostle’s remains; for centuries believers and non-believers have walked the route starting at multiple points in Spain and France. To respect religious tradition, find spiritual space, have fun with friends or lose those stubborn pounds—they travel along the terrain-varied road like rhythmic ants on a trail sharing time, sweat and food and shouts of Buen camino!

The film’s strengths include the landscape colors and chance to watch the fruit of a real and film-life father-son relationship. Written and directed by Emilio Estevez, the film also honors his own Galician grandfather and Spanish roots. While Daniel’s death shoots the movie out of the gates quickly, the weeks of walking slow it back down. Tom collects friends along the way who help him re-evaluate and appreciate simple joys in life: savoring fresh food, experiencing the world outside of an office, and making new friends. There is a happy drug-pedaling Dutchman Yost (Yorick von Waginegen), an excited Irishman (James Nesbitt) and a ticked-off Canadian girl (Deborah Kara Unger).

With his son’s ashes and everything to sustain his physical journey clinging to his back, he walks hours a day, sunrise to sundown, stopping in villages that hold the path only to rest or eat. Travelers camp or sleep in albergues—family-run hostels often with large rooms and many beds, cheap for few Euros a night. By stretches of silence and festive meals, they unravel eachother’s reasons and participate in mutual transformation. But I missed seeing father and son interact and transform as together characters onscreen. While it was never their proposed intention, when I first heard of The Way, I anticipated seeing the strong acting duo interact. Instead, Estevez directed and limited his onscreen moments to a few minutes as still-living son, and then as brief figments of his father’s searching imagination along the way.

Besides the beautiful scenery and Yost’s genial quips, the most intriguing part was when Tom lost his backpack leaning over a rushing river and jumped in after it. According to the DVD extras, Sheen’s own stuntman tried the river out and deemed it it too treacherous to work. Estevez said the local dam operators had opened the gates to strengthen the rapids at the director’s request. They had one day to get the scene, so with a waterfall and safety crew nearby, Sheen jumped in, swam and swirled after the rapidly traveling bag. At 70-some years of age, Sheen successfully did his own water rapids stunt work.

Then the gypsies and the gypsy boy who steals his backpack. Tom can buy a new bag, and more supplies to finish the walk, but how can he replace his son? When the boy’s father Ishmael (Antonio Gil) realizes his son stole, he makes him to apologize and return what was lost. In apologetic hospitality, Ishmael invites Tom and his friends to an “intimate gathering” and we are granted a brief but delicious glimpse of celebration laced with rumbling flamenco music and courtyard-fire dancing. It is here that Ishmael directs Tom to continue beyond the cathedral to the water’s edge, to release the rest of his ashes and complete a more meaningful journey for both father and son.

The movie has a lot of elements that make the director commentary option a gem. Shot almost entirely in Spain by veteran Hollywood performers on an un-Hollywood budget, the boys share a congenial flow discussing production. (This is the third time Estevez directs Sheen in a film). They are writers, producers and in a separated way subjects of the experience. The experience drives emotion so acutely at few specific—like with Tom’s reaction to his son’s death or the music-ferried moments when the troupe finally makes it to the cathedral and soaks in the mass of St. James’ cathedral. I’m not religious, but I could smell the incense and feel the catches in their throats as St. James monks rolled a giant metal censer like a pendulum, to swing from soaring cathedral walls around their room, blessing collected road orphans’ journeys with their smoky clouds.