Posted in: No Huddle by Archive Authors on February 29th, 2012 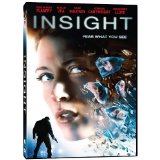 I am back! For now. Here to review Insight. Dun dun dun! A psychological thriller type that my husband thought I would like to take a look at. And then he bat his eyes and asked me to review it. Since I am a sucker for him and his gorgeous eyes, I agreed. Was this movie worth the look? Let’s take a look, shall we?

So, we start the movie with an ambulance bringing in a stab victim. It is your typical scene of someone being wheeled in on a stretcher, down a hospital corridor. We learn that the stab victims name is Allison Parks (Angeline-Rose Troy) and she has been stabbed over a dozen times. They get to the operating room and start the usual medical jargon and run around the room acting like they are doing something important. They begin to fire up the heart zappers (Yes, I know there is a technical, fancy schmancy, medical name for them, but I like heart zappers, it sounds more festive) but before they can get them to full charge, the victim opens her eyes wide and looks at the nurse by her side. She tells her “He loved me”, the nurse grabs her, and ZAP! Nurse falls to the floor (You need to know that its not a good idea to grab someone who is about to be jolted with electricity, it does pass through one person to another).

The nurse, Kate (Natalie Zea) wakes up abruptly, laying in a hospital bed. A fellow nurse, Valerie (Lesley-Ann Brandt) is there by her bed side. I, personally, would not mind if she was at my bed side, just saying. Kate starts to ask about the stab victim from the night before. She confides in her friend that this girl spoke to her. But, Valerie tells her that the girl was dead on arrival. Crime scene! Look at that hat! Oh, now that is one stylin’ detective. Look at me all typical with a stylish hat and my trench coat. Oh, now I am going to try to be witty! Detectives Canto (Max Perlich) and Rafferty (Sean Patrick Flannery) talk about Allison’s murder. Apparently, neighbors watched girl get stabbed from their apartment windows and no one called the police. We get more typical cop stuff.

Kate wants to leave the hospital to take care of her sick mother. Valerie tries to stop her, but Kate is persistent that she needs to take care of her mother. We learn that her mother is terminal and was given six weeks to live, but is still around six months later. Kate tells Valerie that she is leaving regardless of doctor orders, and walks out. As she is leaving, she faints at the sight of some ambulance lights, and she sees what Allison saw on her way in the hospital. DREAM! She wakes up next to her sick mother (Veronica Cartwright) and gives her mom her medication. Her mom wants to know what is wrong, Kate is hesitant but tells her she had a nightmare. Her mom is persistant, and Kate then tells her mom that a patient that died is bothering her. Kate tells her about Allison. While telling her a mirror falls behind a dresser in the room and breaks. She goes to the kitchen and hears a story about Allison’s murder on the television.

Kate confides in Valerie that she thinks Allison told her that her killer loved her. She insists the cops are looking in the wrong place, and that she is the only one doing anything about this girls murder. So what does she do? She goes to the crime scene! Because that is so what any of us would do. Yeah… She looks above at the windows to the apartments and lights in the windows start to turn off. She noses around and meets a creepy guy, Shep (Christopher Lloyd). They are in his apartment having a cup of coffee, and start to discuss the murder. He claims he didn’t hear anything, but then describes the screaming. Kate is asking more questions, meanwhile lying that she was a friend of Allison’s. Shep sounds creepy but claims he was nothing but a neighbor, a neighbor who happened to have a key to Allison’s apartment. Yeah. She wants to leave but he is reluctant. She asks for a glass of water then steals the key when he is getting it and leaves to go to Allison’s apartment. Dun dun dun!

I have lots of problems with this movie, but not all week long to tell you about them, so I will try to sum it up a bit for you. This movie is full of twists and turns. Which, could be a good thing, if done correctly. I love movies that mess with your mind. Unfortunately, for this movie, this is not the case. This is a case of too many twists and turns, so many that the end of the movie leaves you at a loss for what in the H-E-double-hockey-sticks you just spent an hour and a half watching. I got the ending after watching the movie twice. I only gave it a second shot because I had to review it. But to be honest, if I did not have to review it, I would have gotten rid of the DVD and not given it a second thought. The story is just not that good.

I also have to comment on the acting and the script. The acting was pretty average. However, the script for some of these scenes are awful. Especially, any scene with the detectives. Every word spoken is so typical and cliche. And why in the world did they cast Christopher Lloyd for a five minute role? They could have cast some random creepy guy off of the street. But apparently, they needed a name to throw on the DVD cover (I am assuming this because they only sent the disc itself, ho hum, it will make a nice coaster) or movie poster to try and boost sales? He played an excellent creepy old guy, in fact, his acting was the most believable. All together, this is a pass in my book. I would not even bother to Netflix it.