To Catch a Thief (Blu-ray)

Posted in: Disc Reviews by Gino Sassani on February 29th, 2012 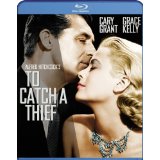 To Catch A Thief is not typical Alfred Hitchcock territory, but then again, it really is. It’s not a terribly suspenseful film coming from the acclaimed “Master of Suspense”, nor is it at all a frightening film even though it was directed by one of horror’s genius minds. What really is scary, however, is how close to a different film this almost was. Cary Grant had exiled himself into retirement. If you can believe his statements at the time, he was concerned that the moviegoing public was pretty much sick of seeing him and preferred the younger actors just then coming of age. He turned Hitchcock down for the role at least twice, before Hitch made a personal visit and appeal to the Hollywood legend. Grace Kelly was also reluctant to do the part. She did it because she loved working for Hitch. Unfortunately, Paramount had other plans. They were troubled that Grant was nearly twice Kelly’s age, and worried that either the public or the standards censors would not accept the situation. They were half right. While the film was one of Hitch’s toughest battles with the Standards folks, the public flocked to see Grant and Kelly on the screen together. Grant would continue his return to acting for over a decade longer. Not so Grace Kelly. The Philadelphia native would have her fateful meeting with Prince Rainier of Monaco and would spend nearly 30 years portraying the larger-than-life, but real nonetheless,  Princess Grace of Monaco, before a tragic automobile accident would end her life. All the same, To Catch A Thief would remain one of her last films. Hitch almost lured her out of retirement some years later, but she declined, saying that if she were to do a film, Hitchcock was about the only man she would have done it for.

John Robie (Grant) is a renowned jewel thief and cat burglar. While he’s been retired for fifteen years, he’s still the prime suspect when a rash of burglaries occurs on the French Riviera. The MO is the same as Robie’s, and before long the police are blaming him for the work of France’s newest celebrity thief, The Cat. Robie sees only one chance to get himself out from under the mess. He has to go to the area and catch the real thief. Once there he hooks up with insurance agent Hughson (Williams) who cooperates on the off chance his company can be spared these high payouts. Robie also meets young and attractive socialite Frances Stevens (Kelly), who sets her sights on catching this thief for her own. She constantly tries to seduce Robie, knowing who he is and suspecting him of being The Cat. When her own family jewels turn up missing, she begins to rethink the dangerous game she was playing. That only gives Robie even more incentive to catch the real crook. Will Robie catch The Cat? Will Frances catch Robie? Only Hitch knew for sure, and in 1955 audiences found out in the film classic, To Catch A Thief.

Hitchcock was never a fan of location shooting. He was a control freak who insisted on having almost god-like powers over his set. He was also a bit of a French fanatic as well. With this film even Hitch couldn’t resist the urge to give up some of that control and capture the French Riviera, making this film stand out from most of his others with its vast vistas and Academy Award winning cinematography. Hitchcock also turned to a new method, used only twice previously, to capture his latest movie on film. Paramount had developed the VistaVision system in response to the hugely popular Cinemascope system. Hitch liked it so much he continued to use the system on many of his subsequent movies. That doesn’t mean that Hitch completely abandoned those trademark touches that made his films so easily identifiable even if there were no screen credit. Look for his traditional cameo early in the film, seated next to Grant on a caravan. There is also plenty of that sardonic humor that was so much a part of Hitch’s image. There are also many instances of his disdain for eggs, which he took every opportunity to abuse in his films. Hitch was a gourmet cook, but had a very strong aversion to egg yolks. They literally made him sick. There are also those incredibly clever images that were a part of his usual toolbox. One such image shows an unlucky Cat suspect dead in a pool of water. Hitch lingers on the image, framed as only he could.

On the surface this is a mystery, but honestly, the mystery elements take a back seat to the flirtation between Kelly and Grant. Hitch was no idiot. He knew what he had in these stars, and he knew that’s what audiences were going to come and see. Hitchcock had a great amount of trouble with the censors, and he appeared to delight in playing a game of cat and mouse with them. He pushed the limits of innuendo in the film and managed to bully into the film a scene deemed far too suggestive to the more conservative censors and even studio brass. Like the shower scene in Psycho, the fireworks scene here would be copied over and over again until it became almost a Hollywood cliché. As Grant finally succumbs to Kelly’s advances, the film continually cuts to a fireworks display going on outside of their window. As the leads got more involved the display increased in intensity. It was a testament to the power and respect Hitch welded that the scene remained intact. Both Kelly and Grant considered this to be one of their best films. Take a look for yourself, and you can’t help but understand why.

To Catch A Thief is presented in its original aspect ratio of 1.85:1. The 1080p high-definition image is arrived at through an AVC/MPEG-4 codec with a bit rate of nearly 40 mbps on average. This is without a doubt Hitch’s most vivid and brilliantly-shot film. The transfer here is pretty solid. Colors are absolutely brilliant. A great example can be found in the very colorful masquerade ball near the film’s climax. Everything remains so bright and dazzling, even 50 years later. This is a brilliant high-definition image presentation with a sharpness fans of the film will be absolutely delighted to see and own.

The DTS-HD Master Audio 5.1 doesn’t try to expand on the original mono presentation. The new mix merely offers a fuller and more dynamic edge to what was already there. The original was a simple mono affair. I’m grateful the changes were subtle. It’s all in the dialog, and you’ll get that just fine.

There is an informative Audio Commentary with film historian Drew Casper. He teaches a class on Hitch at USC, and this sounds very much like a college lecture.

A Night With The Hitchcocks: This 23 minute feature takes place in a lecture hall at USC. Pat Hitchcock and her daughter Susan field questions from Hitchcock students about the man and his life.

Unacceptable Under The Code: This very informative 12-minute feature chronicles Hitchcock’s troubles with the censors. We even get to see pages containing the original complaints.

Writing And Casting To Catch A Thief: This 9-minute feature is a typical interview piece. It covers the censorship issues again. It also features Pat Hitchcock and her daughter.

The Making Of To Catch A Thief: At 17 minutes this piece covers such topics as locations, cinematography, costumes, and Hitch’s cameo.

Behind The Gates – Cary Grant and Grace Kelly: This 6-minute piece offers up mini bios on the two legendary leads.

Alfred Hitchcock And To Catch A Thief – An Appreciation: You get some Hitch home movies here. It’s nice to see and hear about his home life and the kind of man he was away from Hollywood.

Edith Head – The Paramount Years:  This 14-minute feature throws the spotlight on costume designer Edith Head and her contributions to Paramount over the years.

Photo Galleries and a trailer fill out the extras.

It can safely be said that this is a romance film more than anything else. I don’t really tend to like romance films. But Hitch had a way of making even a romance extremely interesting. The best part is that Hitch never lingers on the two getting together, outside of his famous fireworks scene. Instead, Hitch was more into the chase. There’s also little question that Grace Kelly was aptly named, for it is her grace more than her looks that made her the attractive starlet she was. Oh, and by the way, did I mention there was this little mystery going on? The fact is, To Catch A Thief is an appropriate selection to Paramount’s Centennial Collection. “Oh, it’s good. It’s quite good.”

Gino Sassani is a member of the Southeastern Film Critic's Association (SEFCA). He is a film and television critic based in Tampa, Florida. He's also the Senior Editor here at Upcomingdiscs. Gino started reviewing films in the early 1990's as a segment of his local television show Focus. He's an award-winning recording artist for Omega Records. Gino is currently working on his 8th album Merchants & Mercenaries. Gino took over Upcomingdiscs Dec 1, 2008. He works out of a home theater he calls The Reel World. Favorite films: The Godfather, The Godfather Part II, The Body Snatcher (Val Lewton film with Karloff and Lugosi, not the pod people film), Unforgiven, Gladiator, The Lion King, Jaws, Son Of Frankenstein, The Good, The Bad And The Ugly, and Monsters, Inc.
The Josephine Baker Story Game of Thrones: The Complete First Season (Blu-ray)