Posted in: Disc Reviews by William O'Donnell on February 28th, 2012 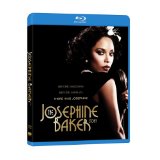 Josephine Baker was an international sensation who faced adversity all her career because of the colour of her skin. Terrified and sickened by the treatment of black people in the US, Baker fled to France where she found joy, fame and fair treatment as an entertainer. As her career exploded into super-stardom, she was more than just an exotic singer/dancer, she became a war hero and civil rights defender.

After being teased during the opening credits with visions of Baker performing an intimidatingly sexualized dance, we are shown her traumatic childhood experience of witnessing race riots in St. Louis; riots that cost the lives of many black people and helped to enforce Baker’s decision to flee the US as soon as she could. Before her exodus, she made a name for herself as a vaudeville comedienne, often performing in black-face. Stifled by the racist laws of the early American 1900s, Baker did not hesitate to tour Paris with a band of performers. Said tour would turn into her permanent residence in France.

The youngest years of Baker are told in a hastily but well-composed fashion. We are offered many visual examples and treats of a young comedian charming US audiences then truly blossoming before French crowds. The earliest European days become a bit less charming in their exposition as Baker is conveyed more as a party-girl than charismatic artist for it was her love affairs that the narrative used to place checkpoints on the significant turns in her life, and the trail she was blazing to super stardom. We see Baker never losing her smile as she is pursued by important men, praised onstage and the one everyone must meet at luxurious swarees.

Thankfully the filmmakers do well to highlight the fact that it was more than just how willing Baker was to become partially nude in her performances that gained her acclaim, but what she did in said performances with her movement and energy to truly captivate viewers. She was indeed shocking, but more than just a gorgeous body onstage.

As the film progresses, the narrative slows down to dwell on her time spent aiding the war effort for French resistance fighters, where she helped smuggle information and people in the Allied fight against the Axis, which earned her the French Military honor, the Croix du guerre, Baker made a noble effort to fight for what was right as a soldier, entertainer and civil rights activist and this film uses the entire second act and the a hearty chunk of the third to detail this fact. Baker stood her ground morally, and sometimes physically when Nazis barged into her home during her work with the French Resistance,  and then again when officials tossed her to the street during a brief period of financial difficulty and complications.

Lynn Whitefield won an Emmy for her portrayal of Baker (making her the first Black actress to win for Outstanding Lead Actress in a Miniseries or a Movie), and certainly deserves such an accolade. Whitefield’s energy and charisma is infectious. Anyone who portrayed Baker would have to be just about as rare as Baker herself and I totally buy Whitefield’s performance.

It is an unfathomably challenging task to try and compress such an epic life story into a single film of moderate length. Kudos to the filmmakers for successfully encapsulating the spirit of Baker and her many conflicts turned triumphs in life. Things could have been more expansive for sure, but the film medium has its restraints and this film rises to the challenge admirably.

Widescreen 1.78:1. While not perfect, this is still a very nice transfer to Blu Ray. The film isn’t exactly recent, but the footage looks nice and clean with a the 1080p doing a fine job of of presently the different eras depicting, from dusty to sparkling. ‘Decent’ is the word.

English DTS-HD Master Audio 5.1. There are occasional moments where the post-production over-dubbing of certain dialogue parts become a bit apparent in the front most speakers. Mainly thought, this is a well mixed soundtrack. All speakers have satisfying amounts of clearly presented music.

Subtitles in English, French and Spanish.

Audio Commentary by Lynn Whitefield, Writer Ron Hutchinson, Associate Producer Alisa Taylor: Once again, Whitfield takes over. Obviously she is still very proud of her performance, and involvement with this project. She offers the most anecdotes and opinions of each scene as the film plays. Hutchinson has some reactions but his memory doesn’t seem as strong, and Taylor certainly isn’t as passionate as Whitefield about it. They do talk about the possibility of this being a mini-series on HBO, which may have A decent commentary track but not too riveting.

Baker’s historical significance is well documented. Her funeral placed Paris to a standstill, an honour normally reserved for only the highest dignitaries, not in the entertainment field. This film does well to honour her memory with a worthy lead actress and a narrative the highlights the way she changed history more than just her success on stage.