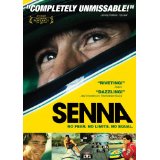 I like to think I know more than a little bit about sports. I wake up to Mike and Mike in the Morning, drive to work while listening to The Dan Patrick Show and rush home to catch Pardon the Interruption. I’ve played organized football, baseball, basketball and soccer throughout my life, and I always make the playoffs in my fantasy football leagues. (Let’s skip the part where I’ve never actually won.) Unfortunately, I have somewhat of a blind spot for sports that are more popular outside the United States. As a result, I know very little about Formula One racing and I knew absolutely nothing about Brazilian F1 champion Ayrton Senna until I watched the engrossing and spectacularly thrilling documentary about his life.

Senna eschews many of the conventions of documentary filmmaking, most notably the use of talking head interviews. (We do get sporadic voice-overs from key players, including Senna himself.)  Instead, director Asif Kapadia tells Senna’s story entirely through an awe-inspiring collection of archival footage that chronicles both his professional triumphs and failures, as well as his personal life and the massive impact he had on his home country. There are even some relatively private, truly gripping moments involving the dynamics of a racing team and the behind-the-scenes politics of Formula One, a topic that I guarantee I wouldn’t have found even mildly interesting in almost any other context.

The film starts with Senna’s first trip to Europe to become a professional driver in 1978, but largely focuses on the period between 1984 and 1994 when he became Formula One’s biggest star and achieved global fame. In my opinion, any film — whether it’s fiction or non-fiction — that chronicles the life of an extraordinary individual, needs to show (not tell) proof of said greatness, plus give some insight into what made that person special. Senna completely delivers on both accounts.

We are treated to incredible racing sequences — including an on-board camera that shows the track from Senna’s perspective and automatically raises your pulse — that showcase Senna’s flair and dominance, as well as some of the sport’s most indelible images. (Like fellow racer Martin Donnelly lying motionless on the track, having suffered a grisly leg injury.) I’m sure there are racing aficionados out there who would have liked to have seen even more on-the-track action, but I’m happy the movie decided to cover all aspects of Senna’s life. (Plus, if those people really are F1 obsessives, they’ve already seen that stuff dozens of times.) More importantly, the movie posits that what set Senna part was his willingness to push the limitations of  both his car and the race track at all times. (Even when it wasn’t entirely necessary.) Senna is shown eloquently and provocatively justifying his approach by openly discussing his religion when he says, “Because I believe in God, and have faith in God, it doesn’t mean I’m immortal.”

That approach led to a high number of victories…and crashes. Those crashes (as they unfortunately do today) led to immense popularity with fans and some hard feelings with some of the other racers. Kapadia’s greatest achievement, in my opinion, is taking existing footage and constructing a cohesive, compelling narrative, which includes a rival for Senna in fellow racing great Alain Prost. (The hissable “villain” was even French, for cripes sake!) Kapadia also manages to wring riveting drama out of a pivotal pit stop and post-race deliberations among officials after the 1989 Japanese Grand Prix.

Of course, none of this would matter if we weren’t engaged by the film’s subject. Despite being universally adored in his home country — at one point, one anonymous woman states, “He is the only good thing in Brazil.” — the film doesn’t pretend that Senna was perfect. Still, his charisma — displayed in a few surprisingly saucy television appearances — and force of personality were undeniable. His elated reaction to finally winning a big race on his home turf, for example, was touching and unforgettable. (As was the fact that he was too physically exhausted to properly hoist the trophy over his head.)

Even though not knowing the story of Ayrton Senna surely enhanced the gut-punch nature of its conclusion, this is still one of the finest documentaries I’ve ever seen from a technical and storytelling perspective. Senna is also moving, exciting and as good (and probably better) than any Oscar-baiting, fictional biopic about the racing legend’s life could ever be.