My Week with Marilyn (Blu-ray) 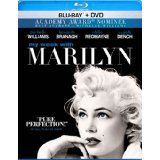 “What must it be like to be the most famous woman on Earth?”

In My Week with Marilyn, one character relays this very question — apparently asked recently by Queen Elizabeth II — to Marilyn Monroe herself. The main problem with this movie is that it is less interested in exploring that query with a great amount of depth, and more interested in answering the considerably less provocative question, “What is it like to hang out with someone super famous?” (That’s what Entourage was for.)

It’s too bad, because director Simon Curtis has made an otherwise visually-appealing film filled with performances that mostly range from strong to wonderful.

My Week with Marilyn follows Monroe at the height of her fame as she makes her first trip to England with third husband Arthur Miller (Dougray Scott, in what amounts to a glorified cameo) to film The Prince and the Showgirl, a light comedy directed by acting legend Sir Laurence Olivier (Kenneth Branagh). During the production, Monroe forms a connection with Colin Clark, an aspiring filmmaker serving as a third assistant director/errand boy. The script by Adrian Hodges is based on two memoirs — The Prince, The Showgirl and Me and My Week with Marilyn — Clark wrote about his time working on the film and his relationship with Monroe.

I actually don’t have an issue at all with this hyper-specific approach to examining an icon like Monroe. It’s certainly preferable to the sprawling, unfocused J. Edgar, which bit off more than it could chew, and then tried to cram in some ice cream on top of that. When we first glimpse Marilyn — crooning “Heat Wave” on the big screen — it’s through Clark’s sympathetic and adoring eyes, and that prism sets the tone for the story.

Where My Week with Marilyn falters is in fleshing out its non-famous protagonist. Eddie Redmayne — a gifted an actor and a Tony winner — is fine as Clark, but the character, who started off promisingly as someone willing to work hard and do anything to achieve his dreams, eventually devolves into an eager-to-please cipher. Unfortunately, that neglect leads to an imbalance in the audience’s investment in his eventual relationship with Monroe. More importantly, the fact that Colin only sees Marilyn with those sympathetic, adoring, idealized eyes prevents us from getting any fresh insight into her character.

I wouldn’t say Oscar nominee Michelle Williams is perfect as Monroe, but she’s pretty damn good, especially when you consider that she doesn’t really resemble Marilyn at all. Although Williams impressively sings and dances in the movie, I thought she was much more successful conveying Monroe’s insecure, weary, naive side than when she had to replicate the real-life legend’s star power. (Then again, the fact that no one could really reproduce what Monroe did is what made her special.) In the movie, Milton Greene — the famous photographer and Monroe’s business partner — says, “When Marilyn gets it right, you just don’t wanna look at anyone else.”  That’s pretty much how I feel about Williams’ performance, who — unlike the shaky, overwhelmed Marilyn — mostly gets it right.

Just as impressive is fellow Oscar nominee Kenneth Branagh — constantly compared to Olivier for pretty much his entire professional life — who imbues his pompous, obscenely-talented, passionate and increasingly-agitated character with nearly as much complexity as Williams achieves, in about half the screen time. Dame Judi Dench (as sympathetic cast member Dame Sybil Thorndike) and Emma Watson (radiating intelligence and maturity in a small, mostly thankless role as a girl who works in the movie’s costume department and catches Colin’s eye) also provide strong support.

In fact, I found the stuff surrounding the production of The Prince and the Showgirl — Monroe’s on-set tardiness, her ever-present acting coach Paula Strasberg (Zoe Wanamaker), Olivier’s desperate attempts to achieve the movie stardom that came naturally to Marilyn — to be livelier and infinitely more fascinating than the story of “Colin’s Got a Crush.”

My Week with Marilyn is presented in its original aspect ratio of 2.35:1. The 1080p image is arrived at with an AVC MPEG-4 codec at an average of 26 mbps. Vivid pops of color — from the movie-within-a-movie’s set and from Olivier and Monroe’s wardrobe — help bring each character and setting to life. The English countryside looks terrific while Monroe and Clark play hooky, and the picture sometimes becomes slightly (intentionally) too bright when Marilyn is on-screen. Though the visuals are hardly groundbreaking for a period picture, the Blu-ray does a stellar job of bringing them to life.

The DTS-HD Master Audio 5.1 track is at its best when showcasing the exceptional score by Alexandre Desplat and Conrad Pope — particularly the piano-driven “Marilyn’s Theme” — and does a serviceable job of delivering the film’s dialogue.

Feature commentary with director Simon Curtis: Though Curtis doesn’t bring an immense amount of excitement or innovation to his debut as a feature film director, it’s an absolute pleasure listening to him speak constantly and articulately about his cast and crew, the differences between Clark’s book and his movie, and filming in the same locations where the movie’s action takes place (including the famed Pinewood Studios, where The Prince and the Showgirl was shot decades earlier).

The Untold Story of an American Icon featurette: (19:07) More in-depth than the average behind-the-scenes featurette, this doc shines a spotlight on each cast member, even the ones with relatively small roles like Watson and Wanamaker. The most interesting parts involve Williams talking about her connection to Monroe (as a girl, she kept a picture of Marilyn in her bedroom) and the recreation of several real-life events and photo-ops involving Monroe, Olivier and their respective spouses.

My Week with Marilyn features a top-notch cast doing stellar work (Williams is a solid Monroe, but Branagh steals the show, in my opinion) in what could have been a fresh, fascinating look at an icon, but winds up being a somewhat superficial, lovingly-filmed exploration of the ultimate case of puppy love. The film is done quite well, but it’s not terribly thrilling or revelatory.