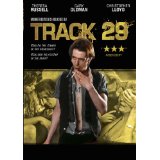 Like The Witches spun my nightmare imagination as a kid, Track 29 debunked my adult cinematic concept of the crazy creepy. So when Linda Henry (Theresa Russell) meets the breaking point of a loveless marriage with her husband Henry Henry (Christopher Lloyd), director Nicolas Roeg doesn’t dissect the relationship, he performs grotesque biopsy on the partners’ psyches.

Mr. Henry spends more time with his model trains than he does interacting with his pretty wife who is pining for a drop of his warmth. She cooks him breakfast and engages with questions, but he doesn’t flinch. Instead, Henry spends his work days treating old folks, and getting Nurse Stein (Sandra Bernhard) to spank his stresses away in regular spatula-whacking “therapy” sessions. Linda’s missing something and wants to have children, but Henry negates her every request: no to conversation, no to sex, no to children.

Then one day the son she relinquished for adoption as a schoolgirl shows up. Martin (Gary Oldman) returns from his mysterious upbringing in England to claim what was taken from him as a child: his mother and every Freudian bit of her motherly warmth. Perhaps this movie does not have reasons, but it has movement. At times I didn’t know what I was watching for, I just didn’t want to turn away no matter how neurotic Oldman grew or how dizzily circular the story spun. I just watched the action unfold along static origami lines—folded, refolded, creased and torn with frenzy. One moment, Martin reaches out to Linda like a needy, confused child. The next he grabs her like a crazy stalker—dripping remnants of his own rapist father.

Martin’s uncomfortable relationship is so unbelievable, and Linda’s acceptance so unsure that we wonder if we are watching a play inside her head instead of a scene of reality. Perhaps Linda is imagining, but Roeg doesn’t give the answer away and plays with sense of proper shock value. The movie made me shudder, its slithering fangedness sometimes shocking, sometimes subtle, but always tearing at my expectations.

My Week with Marilyn (Blu-ray) The Three Musketeers (Blu-ray)