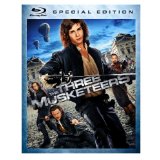 I don’t think I’m breaking any news when I say that director Paul W.S. Anderson’s latest action spectacle, an update of Alexandre Dumas’ classic The Three Musketeers, is junk. So far, the director has specialized in taking established properties — including the Resident Evil and Mortal Kombat videogames, as well as the Alien and Predator franchises — and re-working them to fit his own shallow, highly-stylized, quick-cutting sensibilities. The result is basically the cinematic equivalent of junk food: people know those Resident Evil movies are bad, but they just can’t stop consuming them.

That’s why I was mildly shocked when this latest adaptation turned out to be surprisingly and sneakily faithful…well, except for the part where Da Vinci’s Flying War Machine becomes a significant plot point. (This was a guy, after all, who didn’t include a single character from the Resident Evil game in the first movie!)

Anderson’s movie follows the familiar template of the Dumas story. Young hot head D’Artagnan (Logan Lerman) joins forces with the three, down-on-their-luck musketeers Athos, Porthos and Aramis (Matthew Macfayden, Ray Stevenson and Luke Evans, respectively) to protect the French throne from malevolent forces, including England’s Duke of Buckingham (Orlando Bloom) and Cardinal Richelieu (Oscar winner Christoph Waltz), who serves as an adviser to King Louis XIII (Freddie Fox). Besides casting a D’Artagnan that is the proper age, Anderson’s best achievement is giving each of his musketeers a distinct personality — even if Stevenson’s personality is the exact same one he had in a supporting role in the superior Thor — and fighting style. Macfayden fares best as the de-facto leader, desperately working to ground the movie to the extent that it’s possible to ground a Paul W.S. Anderson movie. The mostly bloodless fights (gotta keep that PG-13!), with each actor handling the great majority of their own sword work, are another highlight. I particularly enjoyed the climactic showdown between D’Artagnan and Rochefort, played by Mads Mikkelsen (once again the best thing in a bad movie, echoing his valiant work in Clash of the Titans).

I’m not even mad at the movie’s anachronistic gadgets and action sequences, since Guy Ritchie’s Sherlock Holmes movies employ the exact same device of incorporating a modern sensibility into a period setting and no one seems to mind. (The major difference being, of course, that Sherlock has strong central performances from Robert Downey Jr. and Jude Law, while Anderson’s movie has…more on that later.)

Unfortunately, Anderson is an awful storyteller who confuses “modern sensibility” with “modern stupidity” and the wheels eventually come off. I don’t mind action movies that don’t take themselves too seriously (especially for an adventure yarn like The Three Musketeers), but the “humor” is often painful and sophomoric (bird poop joke alert!). Also, for a movie that deploys multiple sources of comic relief, only one of them works. (That would be Fox’s under-qualified, kindly, clueless King Louis.)

On top of that, The Three Musketeers spends entirely too much time focusing on people who are not the musketeers. Although cartoonish villainy actually looks surprisingly good on Orlando Bloom (wearing Johnny Depp’s leftover jewelry from the latter’s Jack Sparrow days), Christoph Waltz appears to be asleep during most of his scenes because he can, in fact, play these nefarious characters in his sleep. (Winning the Oscar for Inglourious Basterds was great, but being typecast as a bad guy in The Green Hornet, Water for Elephants and this trash is considerably less great.) Worst of all is Milla Jovovich, absolutely terrible as the treacherous Milady de Winter. Not only is Jovovich bad (which is a shame because she looks terrific and is one of the few credible female action stars working today), but she gets way too much screen time. I haven’t decided if that’s because she’s arguably the biggest star in the movie — yes, bigger than even Bloom who is the second or fifth banana in a couple of franchises, while Jovovich headlines Resident Evil movies that improbably keep getting bigger and bigger — or because she’s married to Anderson. Either way, it was a disastrous decision.

Still, there’s a part of me that admires a movie this crappy for having the boldness to set up a sequel. (I love the power of positive thinking!)

The Three Musketeers is presented in its original aspect ratio of 2.35:1. The 1080p image is arrived at with an AVC MPEG-4 codec at an average of 25 mbps. This isn’t the 3D version of the film, but the visuals still managed to pop in incredibly impressive ways. Some effects (like the graphic opening that evoked the Risk board game) fared better than others (Jovovich dodging bullets like she was in a 17th century Matrix), and the bad ones looked even phonier due to the sharp picture. (Blame the shoddy effects, not the transfer.) The colors and black levels are also tip-top.

The DTS-HD Master Audio 5.1 track seems to sacrifice, at times, a bit of the clarity and volume of the dialogue to bring us booming, textured and layered sound during the movie’s action sequences. (I’d say the viewer comes out ahead in that trade.) Every sword clang is heard, even if there’s an explosion in the background.

The comprehensive bonus material on this Blu-ray really elevates the experience of watching The Three Musketeers and reveals the immense amount of affection and respect for the source material that went into the making of this movie. It’s truly a shame that Anderson is such a bad filmmaker, and most of that didn’t actually reach the screen.

Access: Three Musketeers: When activated, this feature plays concurrently with the movie, and it’s the absolute best thing about the Blu-ray. While you’re watching The Three Musketeers, a small display box on the top left corner of the screen will count down to the following feature, which will play automatically and usually stop the movie. Those features include cast and crew interviews, a trivia track and, best of all, a “Musketeer Fight Meter” that awards points to each of the four protagonists when they dispose of a bad guy. My only minor quibble is that most of the material is not available through the Special Features menu, so you have to activate “Access: Three Musketeers” and sit through the movie to watch them. Still, this makes watching The Three Musketeers 100 percent more fun.

Audio Commentary with Filmmakers: Anderson is joined by his co-producers Jeremy Bolt and Robert Kulzer for an enlightening chat that mostly focuses on the technical aspects of the production, which was mostly based in Bavaria. It’s here that Anderson reveals he was influenced by the 1973 Richard Lester version of The Three Musketeers, and his passion for the material is evident. The producers also explain that simply doing a straight interpretation of the novel would be relatively pointless, so they needed to up the ante, which explains Da Vinci’s Flying War Machine.

Deleted Scenes with Filmmaker Commentary: (14:18) By far the worst feature on the disc for a variety of reasons. First of all, despite what the Blu-ray case says, the deleted scenes didn’t actually feature any filmmaker commentary. It’s just as well, because 11 out of the 12 scenes were merely extended versions of existing scenes that didn’t add much to the party. That left only one true, useless deleted scene.

Featurettes: (9:31) Meanwhile, these four brief featurettes — “Paul W.S. Anderson’s Musketeers”, “Orlando Bloom Takes on the Duke”, “17th Century Air Travel”, and “Uncovering France in Germany” — aren’t even listed on the Blu-ray case. Did they forget about them? Were they ashamed to advertise them? Anyway, they’re short, sweet, and mostly rehash stuff that Anderson and Co. cover in the feature commentary.

The Three Musketeers doesn’t take itself seriously and, for better or worse, you shouldn’t take this movie seriously either. Not-totally-accurate packaging aside, I just wish the care and imagination that appears to have gone into putting together this Blu-ray had been extended to creating a quality movie.