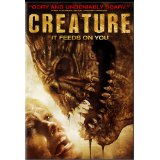 “You have no idea what a real monster looks like.”

Clearly the creators of Creature have no idea what a real monster looks like either. This is the kind of film you would expect released directly to DVD and then shown on the SyFy channel late Saturday night, not one that would be released on over 1500 screens across America. This is a grade-Z movie barely elevated by a half decent cast. It is the kind of film that could have been intentionally funny, but director Fred Andrews wasn’t in on his own joke. Unfortunately it isn’t unintentionally funny either, as it never quite wallows in its own crap enough to be like an Ed Wood or Uwe Boll stinker. I can’t imagine how mad anyone must have been to have paid $10 plus to see this steaming swamp shit on the big screen. It justifiably ended up earning only $327,000 in its 1,507-theater opening weekend, setting the record of the worst opening weekend in more than 1,500 theaters, averaging only $217 per theater!

Fred Andrews had the right ingredients, though, for a gator-man-worshiping redneck cult exploitation horror movie gumbo. Take an attractive and talented young cast, throw them into the backwaters of a Louisiana swamp, add lots of female nudity, spice liberally with incest (‘cause that’s what rednecks do), top with a non CGI, man-in-a-suit humanoid gator mutant, and mix with an insane cult that worships the creature and allows it to breed with their women to extend the family line. Make your lead actor the handsome and charismatic Mehcad Brooks (Eggs from True Blood) and add a side of fan-favorite  genre character actors, Sid Haig and Pruitt Taylor Vince, and you should serve a cult classic B-movie. Somehow Andrews took these perfect ingredients and still ruined the dish.

It starts with a very effective teaser as a hot chick strips down, revels in her full frontal nudity, and goes skinny dipping in the swamp. She is attacked by a gator that bites both her legs off. Although this scene is fun to watch, it has absolutely nothing to do with the rest of the film. She wasn’t attacked by the gator-man, just a big ass bayou lizard.

From here we meet the cast on a road trip to New Orleans. Is it me, or is New Orleans and Mardi Gras some kind of bait in a southern-fried horror trap? Anyway, we really don’t learn much about the younguns other than the fact the boys are ex-military and there is a brother and sister together on the ride. They stop at a boondocks gas station straight out of a million redneck horror movies and meet the owner, Chopper (Sid Haig), and his hillbilly posse. The script basically plagiarizes the open of House of a Thousand Corpses complete with a roadside display of the local urban legend and Haig intimidating and encouraging the younguns to seek out the home of monster. An incredibly dumb and convoluted back-story is given to the origin gator-man, known around those parts as Lockjaw, and the kids set out to go where newspaper articles wallpapering the store claim many people have gone missing or were found dead. Forget Mardi Gras, let’s walk deep into the bayou and look for decrepit redneck shacks and the local reptilian bigfoot. Good times. Good times.

Unfortunately Andrews complete wastes Sid Haig; Pruitt Taylor Vince’s scenes are obviously a series of one take adlibs that are so poorly delivered they may hurt this great character actor’s legacy; Brooks makes for a decent lead, but they give him nothing to work with and even shoot him in the leg for no real narrative-driven reason, but then decide to forget the wound moments after, allowing him to run and fight with no limp or pain for the rest of the movie.

Then there is the monster suit. I love practical effects and really looked forward to the gator-man, but this was such a poorly-conceived monster. The design seems immediately familiar (see Raw Head Rex, Teenage Mutant Ninja Turtles, Slithis, Mr. Sardonicus, even the Gorn from the original Star Trek) and due to the lack of articulation in the mouth it looks like a bad Halloween mask. The greatest sin is that fact we never get to see gator-man do any real damage. All the gore is off screen. Not just with the monster, but even with the cult and our hero, the real action takes place off screen. Even the final battle between the monster and our hero takes place out of our sight in a sinkhole!!!

Let me get this straight: movies like Attack the Block, Tucker & Dale vs. Evil, Troll Hunter, Rare Exports, Let the Right One In, Rec, Rec 2, and Trick ‘r Treat can’t get a theatrical release, but this piece of gator dung like Creature gets over 1500 theaters?!? Avoid this. It is a waste of your time and an incredible waste of talent. I only gave it a 1.5 due to the clever casting and ample nudity.

“That is some serious Clampett-looking shit.”