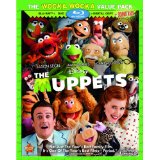 What do the following huge stars all have in common: Elton John, George Burns, Peter Sellers, Don Knotts, Bob Hope, John Cleese, Madeline Kahn, and Milton Berle? They all were guests on The Muppet Show.  It would be pretty hard to argue that the series didn’t became the in place for A-list entertainers to have a little fun. Like a neighborhood clubhouse, the top stars would come to the show and allow themselves to be often upstaged by Henson’s cute little creatures. They would place themselves in ridiculous situations and often allow themselves to be lampooned and ridiculed, and they always appeared to have a blast while they were doing it. Elton John singing his Kiki Dee duet, Don’t Go Breaking My Heart, with Miss Piggy has to be one of television’s most memorable moments. Not only do you have a guest list that would make Saturday Night Live envious, but you have something they never had, namely Kermit, Miss Piggy, Fozzie and Gonzo providing their special brand of Muppet madness.

“It’s the most sensational, inspirational, celebrational, muppetational, this is what we call the Muppet Show!”

Before the series ended, the Muppets took to the big screen for the first time in 1979 with The Muppet Movie. The film brought together all of the lovable characters as they moved across the country on their quest for fame. It’s safe to say that they found it. But there hasn’t been a Muppet movie now in about 12 years, and it’s certainly true that the world has changed a lot since then. With the advent of Pixar and the sophisticated animated films we now grow on computer terminals, one has to ask the obvious question: Is there still room in the world, and more importantly in our hearts, for those cloth-covered charmers from another era? If the response I witnessed at a screening of the new The Muppets is any indication, I’d say there’s room for a bit more wear on that material.

It’s now been more than a decade since the Muppets have been together, and they haven’t even talked to each other in that time. They’ve gone their separate ways. Animal’s in drum rehab, and Fozzie has been running his own small-time group called The Moopets. Miss Piggy is running a Paris fashion design house, and Gonzo has made a killing in the toilet business. But there’s one guy who remembers the good old days.

Meet Walter (Linz). He’s the newest Muppet; he just doesn’t know it yet. He always suspected he was different from his brother Gary (Segel). While Gary continued to grow and mature, he remained a little kid forever. He didn’t have any friends, and as Gary grew into an adult he continued to look after his brother. But now Gary’s into girls …well…one girl in particular, Mary (Adams). They’ve been dating for some time now, and he plans to take her on a trip to L.A to celebrate their anniversary. Of course, Walter tags along. But Walter has his own agenda. He’s a huge fan of the Muppets and can’t wait to visit their studio. What he finds is a disappointing wreck that’s about to be sold to oil baron Tex Richman (Cooper). He’s promised the Muppets that he’s going to turn it into a new Muppet museum, but Walter overhears his real plans. There’s oil under the studio, and he’s going to tear it all down and drill. Unless the Muppets can raise $10 million in a certain amount of time, it’ll be too late. Walter takes the news to Kermit, and they all gather the team back together to put on a telethon to raise the money… if Richman doesn’t find a way to stop them.

There’s really nothing complicated about the film at all. There are some happy song numbers that are quite reminiscent of the old Muppet days. There’s plenty of moustache-twirling villainy. But most of all… there’s plenty of Muppets. The whole gang is back, from The Swedish Chef to Scooter. The show they put on is pretty much an extended version of the old show. But somehow this tired Scooby-Doo plot and simple storytelling is just as charming as ever. The truth is that children’s movies haven’t looked anything like this since…well… the Muppets. The kids in our audience were in heaven the entire time. I heard plenty of laughter and giggling. The upbeat crowd has me totally convinced that the Muppets are back.

The biggest letdown here is that there isn’t much participation of the old guard. It’s hard for me to imagine Miss Piggy without Frank Oz. Eric Jacobson does a good enough job, but most of the voice cast had to multitask, and it was not the best idea. He also played Fozzie and Animal as well as others. Now, the original cast provided multiple voices as well, but it’s just not the same here. To be fair, Eric’s been doing her swineness for almost 10 years off and on, but this is a huge movie. It’s really my only disappointment, and it won’t, of course, matter or likely be noticed by the little ones.

The film has some cameos that range from the notable like Alan Arkin and Bill Cobbs to the bizarre which includes James Carville. Jack Black has a delightful role as the show’s reluctant host. And Amy Adams is terribly underused and often appears to be unsure why she’s even there. The real surprise is the normally quite risqué Jason Segel, who not only has a staring role but serves as the film’s primary writer and executive producer.

The Muppets is presented in its original aspect ratio of 1.78:1. The 1080p image is arrived at with an AVC MPEG-4 codec at an average 30 mbps. The film is quite bright and shiny. The high-definition image presents a cheerful and sharp image providing enough detail for the subject matter. We’re talking Muppets here, and they look about as good as they have ever looked on your television screen.

The DTS-HD Master Audio 7.1 is quite lively and as bright as the image itself. The songs will provide plenty of dynamic range for the kids who will sing them over and over again. Dialog comes through quite well. There’s some nice ear candy mostly found in silly sound effects.

There is an amusing Audio Commentary with Jason Segel, James Bobin and Nicholas Stoller.

You get a DVD copy and Digital Copy of the film. The DVD copy also contains a soundtrack you can import on a computer device.

All of the extras are in HD

Intermission: When you pause the film you’re treated to some amusing Muppet antics until you resume the film.

Scratching The Surface – A Hasty Examination Of The Making Of The Muppets: (15:56) This is more of a mockumentary with the film’s cast, crew and Muppets.

A Little Screentest On The Way To The Read Through: (3:19) Skit.

Explaining Evil – The Tex Richman Song: (2:28) Just the rap song from the film, which is honestly the movie’s low point.

Spoof Trailers: The film was marketed with trailer spoofs of other films releasing around the same time. Here they are. They include spoofs of Rise Of The Planet Of The Apes and Green Lantern.

Expect a very child-friendly film with plenty of charm for them and nostalgia for you. It’s not perfect, but it’s perfectly wonderful, to be sure. The film itself mirrors the same questions that I’m sure everyone on the show has asked themselves during production. Can the Muppets work today? I suggest you check it out and answer that one for yourself, if you can stop humming and crying long enough to remember the question. “I always dreamed we’d be back here.”

Gino Sassani is a member of the Southeastern Film Critic's Association (SEFCA). He is a film and television critic based in Tampa, Florida. He's also the Senior Editor here at Upcomingdiscs. Gino started reviewing films in the early 1990's as a segment of his local television show Focus. He's an award-winning recording artist for Omega Records. Gino is currently working on his 8th album Merchants & Mercenaries. Gino took over Upcomingdiscs Dec 1, 2008. He works out of a home theater he calls The Reel World. Favorite films: The Godfather, The Godfather Part II, The Body Snatcher (Val Lewton film with Karloff and Lugosi, not the pod people film), Unforgiven, Gladiator, The Lion King, Jaws, Son Of Frankenstein, The Good, The Bad And The Ugly, and Monsters, Inc.
Tinker Tailor Soldier Spy (Blu-ray) Creature