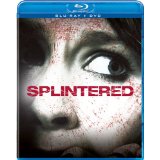 “Chill out? Am I the only one hearing this? This thing attacks people, Jane, and she wants to go looking for it, because she has deranged fantasies about the unexplained!”

In Splintered a group of teens go seek the truth behind the northern Wales urban legend known as the Beast of Bodmin, a creature who may be responsible for the death of a bunch of livestock and the disappearance of a number of tourists and citizens. Sophie (Holly Weston) lives with unsuppressed childhood memories of being assaulted in her bedroom by some kind of beast man. It drives her to seek out the unknown with a particular obsession with the Beast of Bodmin. Sophie tricks John (Sol Heras) a boy crushing on her, her best friend Jane (Sadie Pickering), Jane’s boyfriend Sam (Sacha Dhawan), as well as Jane’s brother Dean (Jonathan Readwin) into join the hunt without really ever telling them what they were doing. So what should be a weekend romp turns into an investigation of a deadly urban legend. Gee, never heard of that plotline before.

Before long, Sam has proven himself to be such a thoroughly repellent douchebag of a character you are praying his death will be soon and cathartically gory and painful. John is so driven by getting laid, his choices range from stupid to absurd. Dean seems like a nice guy, but isn’t given a damn thing to do. Jane is a shrill bitch who you want to see killed so she will stop screaming. The only lead character remotely layered and smart is Sophie. Her fight to escape is honestly tense and suspenseful.

This is a myster-style movie where the awkward exposition at in the final third explains everything, so telling much more here would serve as a spoiler. Let me just say Stephen Walters, billed here as Stephen Martin Walters, steals the show as Gavin. His performance alone elevates this movie from a 1-star rating to a 2. In fact, I would almost go so far as to even recommend this film for Stephen Walters’ scenery chewing work in it… almost.

Director Simeon Halligan has a background in production design, and it shows in the creepy and detailed setting of the abandoned Catholic orphanage. The acting is fair from the teens and excellent from Walters. Halligan really doesn’t know how to stage scares or effective action scenes, so far too many crucial horror sequences took place off camera. However, the final third of the film is fairly relentless and doesn’t pull many punches. Unfortunately it is a case of too little, too late.

Splintered is presented with an AVC encoded 1080p transfer in 2.35:1 running an average of 15 Mbps. Cinematographer Michael Costelloe brags about being one of the first to use the HD digital RED CAM in the UK, but copies the typical horror desaturated cool look, enveloping everything in shades of green and blue. The blacks are crushed, leaving too much of the film dark and incoherent. The heavy-handed dark transfer robs the film of detail or any vivid colors. Even the daytime exterior scenes are so filtered colors never look natural.

Splintered’s lossless DTS-HD Master Audio 5.1 audio mix leaves much to be desired, but is better than the video. Active LFE channel and occasional surround immersion is evident, but sometimes the effects are jarringly out of place in the sound field. For example, in one scene Sophie runs out of the woods towards the camera as she is being chased by the beast, they placed the beast’s roars in the rear surround, so the effect was she was running towards the creature, not away. Even though Richard Bodgers provides a moody and nuanced soundtrack, Halligan instructed him (against Bodgers better judgment) not to add musical stings to the scares and action beats. The result leaves the scenes flat and without full impact. Effects and music to dialog are a poor mix, and unfortunately there are no subtitles to help you through the buried heavy U.K. accents.

Other than so many missed horror opportunities, one of the greatest flaws with this film is the utter lack of chemistry between the leads. I could not imagine why they would ever hang out with each other. The other killer flaw is the incredibly clichéd moments in the script. For example, the heroine trips over a branch and falls while being chased. Really? I think director Halligan shows promise, but needs better source material to work with and needs to show a definite lack of restraint in his depiction of horror. Not really even worth the rent, but could be an OK late-night cable catch.

“I’m going to have a quick look inside, that’s all.”