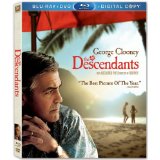 Even though I’m guilty of doing it myself, I always laugh a little when I hear someone complain that certain actors “just play themselves”: as if you or I actually know these celebrities personally and have the authority to say what they’re like in real life. Of course, what we really mean is most movie stars have found a screen persona that has connected with audiences and — in the spirit of giving people what they want (or laziness) — tend to stick pretty close to that image, adding only a tweak when we catch on to their game. (I mean, do we really want to see Sylvester Stallone tackle Hamlet? Wait, that would be amazing!) This isn’t a new development: it’s been happening since the days of John Wayne, and it continues to happen today with the likes of Tom Cruise, Will Smith, Jennifer Aniston, Seth Rogen and others. (Ok, so Seth Rogen probably is just playing himself.)

Few actors are “playing themselves” to as much critical and commercial success today as George Clooney, a handsome, articulate, serious-minded charmer who looks great in a suit. So when he plays handsome, articulate, serious-minded charmers who look great in suits, I can understand why some people may shrug their shoulders, no matter how excellent the performance is. You think it’s an accident he won an Oscar for gaining some weight and covering his face with a scraggly beard in Syriana, but was shut out for superior work in Michael Clayton and Up in the Air?

In The Descendants, the two-time Sexiest Man Alive still looks like himself, so his challenge is to dim his star power enough to play the cuckolded Matt King, a Hawaii lawyer who learns about his wife’s infidelity after she is seriously injured in a boating accident. The self-described “backup parent” must reconnect with his two daughters, Alex (Shailene Woodley) and Scottie (Amara Miller), and come to terms with his wife’s condition while deciding what to do with 25,000 acres of pristine, incredibly valuable land controlled by a family trust that dissolves in seven years. (Matt is the only trustee.)

Director Alexander Payne and his co-screenwriters Nat Faxon and Jim Rash (the scene-stealing Dean Pelton in Community) won the Oscar for their adaptation of Kaui Hart Hemmings’ novel of the same name. Despite some awkwardly-delivered, hand-holding narration from Matt in the beginning, the sharp script contains some really good lines — including Matt’s philosophy of giving his children “enough money to do something, but not enough to do nothing” — and mines humor from dark, unexpected places without trivializing the story’s more dramatic aspects. Still, I was more impressed by Payne’s work as a director.

Payne’s greatest strength as a director is the way he’s been able to establish his films’ settings — whether it’s his native Nebraska in Election or About Schmidt or California’s wine country in Sideways — as fully-formed characters. In that particular regard, The Descendants may be his best achievement, giving us the picturesque beaches we expect from a Hawaiian setting, but also mixing in the cruddier, urban side of the islands we don’t get to (and maybe don’t want to) see as often. That combination is exemplified by the King house, which seems nice enough on the surface, but hides a dingy, sadly neglected pool.

Clooney’s remarkable array of dorky Hawaiian shirts and boat shoes don’t completely succeed in transforming him into an “average” guy. Instead, it’s his often downcast eyes and slumped shoulders that ably carry the movie. Clooney shines in both quiet moments and when his character has profane outbursts. (The scene, however, where he tearfully addresses his wife at the hospital didn’t touch me as much as it should have because it felt to me like he was trying to give the Academy an Oscar-gasm.) He also has good chemistry with both his on-screen daughters. Miller, making her debut, is sometimes awkward as the younger, potty-mouthed Scottie. On the other hand, Woodley — downright terrible at times on The Secret Life of the American Teenager — is a revelation as the tough, wounded Alex. (That probably says more about the quality of the TV show.) In a sensational performance, Woodley brings an impressive amount of maturity and depth to her character.

The strong supporting cast also includes Robert Forster (as Matt’s bitter father-in-law) and Nick Krause (as soulful lunkhead Sid, who provides most of the movie’s comic relief) as well as Judy Greer (breaking out of the “Romantic Comedy Best Friend” ghetto for a nice dramatic turn), and Matthew Lillard (Scooby-Doo’s former best friend looks good with a few more years on him).

Beau Bridges also pops up as one of Matt’s cousins, urging him to sell the family land and make millions. Although the plot involving his ancestors’ land and the issue of his wife’s infidelity do eventually intersect, I felt the question of whether Matt would sell the land and become a gazillionaire or keep it and…remain a fairly competent and successful attorney mostly came off as fodder for “White People Problems.” The land-sale issue brought up interesting ideas — about what people pass on to their children — but they’re a bit undercooked and, frankly, not terribly dramatic. As a result, the movie is more effective when it focuses on Matt’s efforts to bond with his daughters and the search for his wife’s lover.

Then again, maybe the idea that this multimillion dollar deal turns out to be the least of Matt’s problems is supposed to be the point.

The Descendants is presented in its original aspect ratio of 2.40:1. The 1080p image is arrived at with an AVC MPEG-4 codec at an average of 22 mbps. The picture is generally sharp, but the shots of Hawaii’s beautiful scenery — the beaches, the mountains, Woodley — are stunning. They make the indoor scenes look merely adequate by comparison.

The DTS-HD Master Audio 5.1 track doesn’t have a ton to do, but is splendidly balanced nonetheless. The dialogue is always crystal clear, but you can also hear wind chimes in the background or the gentle rustling of waves in your speakers whenever the characters are at the beach.

Deleted Scenes with Director Introductions (5:46): Instead of having Payne appear on screen or narrate, written introductions precede both deleted scenes. Weird. Anyway, the best of the pair is a brief, well-acted conversation between Matt and Alex on a hotel balcony that wasn’t essential to the finished film, but still nice to see.

Everybody Loves George (7:27): As you can guess from the title of this featurette, this is basically a love letter to Clooney from the rest of the cast and crew. They talk up both his professionalism and his infamous pranks. (One practical joke involved a fart button on his iPhone.)

Working with Alexander (13:34): After a brief tutorial on how to properly make an omelet (who knows?), Payne gets the love letter treatment. This one’s a little more informative because Payne talks about his process, including how he considers his various crew members (casting director, editor, etc.) “co-writers” during different stages of production.

The Real Descendants: (12:06) John Morgan, president of the 4,000 acre Kualoa Ranch and a sixth generation resident of Hawaii, talks about his family history and being a good steward of his family’s land. Patsy Sheehan, whose great, great grandparents came to Hawaii in 1837, also shares her experiences.

Hawaiian Style: (16:47) The commitment to style went way beyond Clooney’s shirts. We see a Hawaiian priest bless the production before it kicked off, and production designer Jane Ann Stewart talks about transforming a eucalyptus tree into a banyan tree to help show the age of the King house. Many other terrific details most people probably didn’t notice are covered. The crew also talks about being overrun by feral chickens after a hurricane.

Casting: (8:11) Payne talks about being open to casting “all humans”, from world-famous movie stars to people off the street. Literally. Apparently, casting director John Jackson will go up to people on the street or in a restaurant if he feels they’re right for a role. This doc focuses mostly on the supporting roster around Clooney. Actor Rob Huebel plays us the voicemail he got from Payne asking him to be in the movie.

Working with Water: (10:58) It’s no newsflash that filming scenes in the water is a giant pain in the butt. This doc does a decent job of showing what a hassle it is. (And we’re not exactly dealing with The Perfect Storm here.)

Music Videos: (10:28) Three wordless videos — “Will I Ever See You Again”, Postcards from Paradise and “Honolulu’s Whisper” — highlight the traditional beauty Hawaii, as well as modern life there.

Waiting for the Light: (2:52) A brief featurette that cleverly illustrates how much standing around there is on film sets.

A Conversation with George Clooney and Alexander Payne: (11:58) Payne talks about balancing comedy and drama in his films, while Clooney discusses why he was attracted to the Matt King character. Both men bond over some of the technical aspects of directing.

I still feel both Clooney (Up in the Air, Out of Sight) and Payne (Election, Sideways) have each done better work in the past, but that shouldn’t diminish this particular collaboration. Though it’s a bit underdeveloped in some places, The Descendants features very good acting that helps tell a moving story in a special setting. The Blu-ray — and its comprehensive special features — expands on all of the movie’s themes and shows you how much fun (but also how boring) making a movie can be.