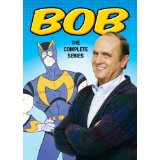 Bob Newhart may not have a ton of range as a comic actor, but the television personalities he created in both The Bob Newhart Show and Newhart were lovable enough to bring great success to both of the shows. One could safely admit that he was really playing the same character in both, and the final episode of Newhart pretty much acknowledged that fact with one of the more clever series finales in television history. So, with two pretty solid hits under his belt, it wasn’t a complete surprise to see the comic enter our living rooms once again in 1992 just a couple of years after his last show finished its run. The name could have been just as predictable: Bob.

Bob McKay (Newhart) had once created a comic book hero named Mad Dog. It was about a vet who conducted experiments with the adrenal gland of a Doberman. The result was a new superhero with the enhanced senses of a dog. The comic lasted just 12 issues and quickly faded into obscurity. During that time Bob was putting his artistic talents to use with a greeting card company, a job he hated. Along comes Mr. Terhorst (Cumpsty) whom we never see. He’s always just a voice over the speaker phone. He’s bought ACE Comics and wants to hire Bob to bring back Mad Dog. It’s the chance of a lifetime, except he’s teamed with Harlan Stone (Cygan) who grew up a Mad Dog fan but now has some radical ideas for the new book. Bob has to constantly rein him in to save the integrity of the hero. The office also includes Albie (Bilgore) who is the office gofer. He’s shy and completely inept in social situations. There’s Chad (Fall) the comic’s colorist who is a super geek. Iris (Kobart) is the old crotchety woman who letters the book. His daughter Trisha (Stevenson) comes to work for the team as well. At home is faithful wife Kaye (Watkins) and their lively cat Otto.

But this show wasn’t very much like the others at all. For the first time Bob’s character had a child. He was also far more cynical than any character that Bob had played before. This character could get mad, and there were folks he decidedly didn’t like. The character never really came off as naturally as his others had, and before long the show was sinking in the ratings. After the first season it was retooled with a new cast and circumstances. It wasn’t enough to save the series, and it was gone after a handful of episodes aired.

In the final episodes a new company takes over ACE and drops Mad Dog. Now Bob has to go back to the greeting card company. He’s in luck because the former president has just left his wife Sylvia (White) for a young dental hygienist. She offers Bob the job of president of the company which doesn’t sit well with her son Pete (Burns). The office is filled with more quirky characters, but none of them are very memorable.

And that’s the thing about this show. Chances are you saw it back in the 90’s, but it just didn’t stick with you. My wife’s a huge Bob Newhart fan and even she had no real memories of seeing the show even though we watched it every week. Newhart’s shows were always populated with extraordinary characters. This one never came close.

The episodes are presented in their original full frame broadcast format. There’s no restoration here and up to nine episodes a disc. We’re talking serious compression and transfers from aged masters. This is an archive-only video presentation.

The audio’s pretty simple here, folks. It’s 1990’s TV sit-com fare, and that should tell you what to expect. We’re talking mono. There is a bit of high-end distortion.

There are three Entertainment Tonight bits with Newhart and Betty White.

There are 4 Mad Dog Comics in a gallery format.

Bob Newhart will always be remembered as a television icon. He was one of the best straight-men in the business, allowing his support cast to be the funny ones. He’s an icon and unforgettable. Unfortunately, Bob will not be one of those shining moments. It needed that slight something more. “Right, zombie babies it is.”

Gino Sassani is a member of the Southeastern Film Critic's Association (SEFCA). He is a film and television critic based in Tampa, Florida. He's also the Senior Editor here at Upcomingdiscs. Gino started reviewing films in the early 1990's as a segment of his local television show Focus. He's an award-winning recording artist for Omega Records. Gino is currently working on his 8th album Merchants & Mercenaries. Gino took over Upcomingdiscs Dec 1, 2008. He works out of a home theater he calls The Reel World. Favorite films: The Godfather, The Godfather Part II, The Body Snatcher (Val Lewton film with Karloff and Lugosi, not the pod people film), Unforgiven, Gladiator, The Lion King, Jaws, Son Of Frankenstein, The Good, The Bad And The Ugly, and Monsters, Inc.
Bounce (Blu-ray) War Horse (Blu-ray)