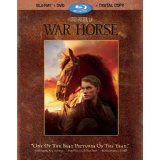 War Horse began life as a novel by Michael Morpurgo and went on to become a relatively successful Broadway play. I haven’t read the book, and it’s hard for me to imagine the material on the stage. But in the hands of Steven Spielberg there is little left to the imagination. This is definitely one of his most inspired films and contains some of the more beautiful and compelling images. That’s saying a lot when you think about the many iconic images Spielberg has brought us from ET to the dinosaurs in Jurassic Park and the great white shark in Jaws. Yes, the images rank right up there. Unfortunately, the film itself doesn’t come close.

The story begins with the birth of Joey, a thoroughbred horse. But this is not really the beginning of the story, is it? Joey is sent to auction where drunkard farmer Ted Narracott (Mullan) falls in love with the impractical animal. Helped by the taunts of his landlord Lyons (Thewlis) he bids too much for the animal and wins him. The problem is that he needed a working horse to plow his fields, and Joey isn’t going to make wife Rose (Watson) very happy at all. But his son Albert (Irvine) instantly sees what his father saw and falls in love with Joey. He promises to train him. If he can’t the family will lose their farm. But even this isn’t really where the story begins.

It really begins when Joey is sold to Captain Nicholls (Hiddleston) at the break out of World War I in order to save the farm. Joey enters the war but is not destined to remain with the captain. He makes his way throughout the war-torn countryside, impacting each and every person he comes in contact with. It essentially becomes somewhat of an anthology as Joey is befriended along the way. There’s the deserter brothers and a young dying girl living with her grandfather. Albert has also joined the war effort when he comes of age, and the two eventually move toward an emotional reunion.

As I’ve already mentioned, the film is loaded with incredible visuals. The English countryside provides for wonderful vistas that work as stark contrast to the no man’s lands of the war. Joey, played by several horses, is a striking animal, and he manages to hold a certain presence that carries the film as it morphs from one place to the next. He far outshines his human actors and characters, who themselves deliver very nice performances. Technically, this is as near perfect a film as you will find.

The battle scenes are quite impressive. Remember, this is the guy who delivered the reality of D-Day to our screens. The authenticity and intensity of these scenes are unsurpassed. The production design lives in the smallest details to the epic image as a whole. From costumes to weaponry to the magnificent set pieces, you won’t easily find any fault in the production itself. Once again Spielberg brings us up close and personal to the rages of war. The attention to detail only heightens the danger we feel for Joey and creates one heroic horse in the process.

One of the most intense scenes involves Joey getting entangled in barbed wire. It’s quite realistic even if the horse was never really in any danger. It’s hard not to be moved by the scene. Spielberg follows that up with a touching scene where an English and German soldier meet in the middle of their fronts to help release Joey from the wire. It’s truly a masterpiece scene.

But the movie didn’t really connect to film audiences. The movie pulled in a disappointing $78 million even though it remained on plenty of screens for up to three months. No question the power of Spielberg and Disney’s Touchstone Studios caused many theater owners to give this film a better chance than most. It was to no avail, and this wonderful-looking film has become one of Spielberg’s worst box office failures.

War Horse is presented in its original aspect ratio of 2.40:1. The 1080p image is arrived at with an AVC MPEG-4 codec at an average 25-30 mbps. This is a wonderful high-definition image presentation. There is a certain realism to the textures of the uniforms and the environments. You can feel the mud on the ground. At times, colors are quite bright. There are a couple of beautiful sunsets set against the silhouettes of characters. It’s a study in brilliant color, contrast, and superb black levels. The disc allows you to truly appreciate the attention to detail.

The DTS-HD Master Audio 7.1 is just as engaging. John Williams delivers one of his best scores here. It might not be as catchy or memorable as Star Wars or Jurassic Park, but it is one of the most emotional pieces he’s ever composed. The audio presentation allows this dynamic score to carry us away with the action. This is often an aggressive mix as you can imagine. The battle scenes are powerful and will drive your subs quite nicely. Dialog always comes through.

There are 2 Blu-ray discs. The first contains the film and two features (all in HD):

War Horse – The Journey Home: (19:35) This is a roundtable discussion with Steven Spielberg and his long-time producer/partner Kathleen Kennedy. The first part features cast members. About six minutes in they are replaced with crew members. They share their thoughts and experiences around a table drinking coffee.

An Extras Point Of View: (3:06) This is a rather nice little journey with the extras who each played soldiers in both armies.

A Filmmaking Journey: (1:04:13) This is the behind the scenes feature driven by Spielberg himself. Cast and crew cover all aspects of the production, and there’s plenty of horses.

Editing And Scoring: (8:53) The highlight here is a conversation with John Williams and some footage of the orchestra in the recording studio.

The Sounds Of War Horse: (7:13) Ever wonder where they get some of those sounds that add reality to a film like this? Here are the answers.

Through The Producer’s Lens: (4:04) Kathleen Kennedy talks about the production as we see some of her photographs from the set.

It’s true that you can create a flawless film with great acting, amazing cinematography and even a compelling story and still not connect to audiences. Perhaps this was a project too close to Spielberg’s own passions. He still delivers the usual quality, but often our passions don’t translate well for the masses. The film runs over two hours. It could have been trimmed and perhaps should have been. Another example that Spielberg’s passion might have gotten in the way here. Still, it’s a film you really should see and share with the family. Perhaps the movie ticket prices weren’t the best venue to do that. Here’s your chance to do it in your own living rooms, if only to share this rather extraordinary horse story. And, then there’s the silly goose…  “He’s something else, that one.”

Gino Sassani is a member of the Southeastern Film Critic's Association (SEFCA). He is a film and television critic based in Tampa, Florida. He's also the Senior Editor here at Upcomingdiscs. Gino started reviewing films in the early 1990's as a segment of his local television show Focus. He's an award-winning recording artist for Omega Records. Gino is currently working on his 8th album Merchants & Mercenaries. Gino took over Upcomingdiscs Dec 1, 2008. He works out of a home theater he calls The Reel World. Favorite films: The Godfather, The Godfather Part II, The Body Snatcher (Val Lewton film with Karloff and Lugosi, not the pod people film), Unforgiven, Gladiator, The Lion King, Jaws, Son Of Frankenstein, The Good, The Bad And The Ugly, and Monsters, Inc.
Bob: The Complete Series Kate and Leopold (Blu-Ray)