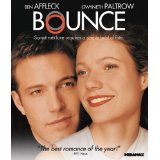 Ben Affleck’s dating life wreaked plenty of havoc on the moviegoing public during the early part of the 2000s. We all know about the infamous Gigli and Jersey Girl debacles with Jennifer Lopez. (It didn’t even matter that J. Lo was barely in Jersey Girl — which actually has a few cute moments — or that the indefensible Gigli was just a deeply weird flick which happened to star two of the world’s most famous, romantically-involved movie stars.) The film usually left off this dubious category is Bounce, a soggy romantic drama starring Affleck and former squeeze Gwyneth Paltrow. Although the pair — who, to be fair, also appeared together in the Oscar-winning Shakespeare in Love — keep this movie watchable, there’s a reason Affleck mostly focuses on directing these days and hasn’t made a movie with Jennifer Garner since they got married.

Affleck stars as hot-shot ad man Buddy Amaral. (We know he’s a hot-shot because he speaks quickly, brashly and constantly has a drink in his hand…Mad Men taught me that.) After scoring a major account with an airline in Chicago, Buddy is stranded at the airport with a hottie (Natasha Henstridge) and friendly family man Greg (Tony Goldwyn). Greg allows himself to get bumped from the flight so he can use the airline compensation to take his family on vacation at a later date. Once the flight starts boarding, Buddy gives Greg his ticket so Greg can go home to his family sooner, but mostly so Buddy can hook up with the hottie at the airport hotel. The plane crashes, killing everyone on board.

Once he’s back home in Los Angeles, Buddy understandably goes into a funk. Eventually, he becomes involved Greg’s widow Abby (Gwyneth Paltrow) and two sons, without revealing that he’s indirectly responsible for Greg’s death. You’re not going to believe this, but Buddy and Abby end up falling in love and Buddy’s secret connection to Greg is discovered at a most inopportune time. (Oh right, ***Spoiler Alert***.)

The fact that the events in Bounce unfurl in a predictable way isn’t an unforgivable sin. The worst thing about this movie is that writer-director Don Roos (coming off the wicked The Opposite of Sex) has taken a very interesting premise — as well as some intriguing ideas about fate and the big/small lies we tell each other — and presented them in a mostly inert, uninvolving package. (Actually, the real worst thing about this movie is the terrible title that Abby explains by saying, “So that’s what I’ve been doing — bouncing. It’s just like crashing, except you get to do it over and over again.”)

It’s too bad this movie turned out to be so forgettable because there’s some good work to be found. Paltrow, in particular, delivers a luxuriously messy performance as the frazzled, kind, overwhelmed, insecure Abby. I know it’s fun to mock her allegedly snobbish attitude, but I think she’s done consistently strong work in her movies, including this one. Affleck is at his best when he’s playing off Paltrow. At other times, he often seems like he’s straining to “act” like he’s depressed or “act” like he’s angry. (Or act like he’s Tom Cruise in Jerry Maguire or something.) This is a bit of a problem because the movie spends more time on Buddy’s shame spiral than it does on Abby and her family. Speaking of which, Goldwyn makes an amazingly strong impression on the entire story despite only having a few minutes of screen time. (Alex D. Linz is also good as Abby’s angrier, older son Scott.) Finally, though there aren’t a ton of laughs to be had, they’re mostly earned by Johnny Galecki was Buddy’s assistant/stereotypically sassy gay best friend.

The movie is actually at its best when Affleck and Paltrow are together. Unfortunately, Roos doesn’t bring much to the table as a director and he allows the story to meander into bad subplots — an embarrassingly-staged court case figures into the climax for no good reason — before it stumbles upon its conclusion. (More on this in a bit.)

Bounce is presented in its original aspect ratio of 1.78:1. The 1080p image is arrived at with an AVC MPEG-4 codec at an average of 19 mbps. I was somewhat surprised to see the darker, interior scenes come across sharper and more consistently than a lot of the outdoor stuff, where the backgrounds tended to blur a bit. As a result, the black levels are impressive and the picture generally looks sharp (as long as the characters are inside). Still, this is a noticeable upgrade over the DVD image.

The DTS-HD Master Audio 5.1 track doesn’t have much to do other than deliver dialogue, which it does in a clear, satisfactory manner. Other than an impressive whooshing plane effect during the opening credits, and the quick scene when Greg is on the plane, there simply isn’t anything dynamic going on here from a sound perspective.

(Note: This is the same bonus material featured in the previous DVD release of Bounce. It is all presented in standard definition.)

Feature Commentary with writer-director Don Roos and co-producer Bobby Cohen: It’s no surprise that a chat between the director and a producer focus on production glitches. The duo is complimentary of the actors, but Roos is often brutal on himself and his lack of directing skills at the time. Most of it is self-effacing, but eventually it becomes a bit painful.

Deleted Scenes with Commentary: (47:13) The fact that there are a whopping 47 minutes of deleted scenes shows how differently this movie could’ve turned out. Roos and Cohen are back to discuss these 14 scenes, which include more focus on Paltrow’s Abby, a strong flashback with Affleck and Goldwyn, and the two downbeat endings that were discarded after a pair of disastrous screenings.

“Need to Be Next To You” Music Video: (3:33) Leigh Nash performs this track which reminded me of that time in the 1990s and early 2000s when almost every romantic movie had a tie-in music video where the musicians usually sat somewhere while clips from the movie played in the background. Good times.

“All About Bounce“: (22:55) This by-the-numbers featurette features profiles on Paltrow, Affleck, Roos and the soundtrack. Sadly, there’s no footage of Harvey Weinstein flipping out after one of those ill-fated screenings.

Ben and Gwyneth Go Behind-the-Scenes: (22:06) After sitting through thousands of interviews in their lives, Affleck and Paltrow turn the tables by chatting up members of the crew. Although it runs way too long at 22 minutes, we finally get the answer to one of life’s greatest mysteries: what does a best boy do on a movie?

Additional Scene-Specific Commentary with Roos, Affleck and Paltrow: It’s a shame this commentary only covers eight scenes — or about 45 minutes of screen time — because this track is a lot more fun than the main commentary between Roos and Cohen. Affleck and Paltrow gleefully mock themselves and each other, while seemingly cheering up Roos. (I particularly enjoyed Affleck busting Paltrow for being a name-dropper.)

The bottom line is the behind-the-scenes drama behind the making of Bounce is infinitely more interesting and memorable than the actual movie. The good news is Bounce doesn’t get bashed like Gigli and Jersey Girl. The bad news is people don’t crush this movie because they probably forgot about it. The Blu-ray provides slight audio-visual upgrades, but is far from essential.