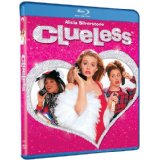 As I get older, I find myself slightly more forgetful. Perhaps I will not remember where I put my watch (even though I own half a dozen), or maybe I will not see my sunglasses when they are conveniently strapped to my head. But at least I am not old enough yet to be clueless. This brings us to our next review starring Alicia Silverstone as the one and only Cher, a 15 year old Beverly Hills girl who is clearly Clueless.

Funky fresh 90’s music and go. Oh wait, that’s an eighties tune but covered by a nineties band. Cher (played by Alicia Silverstone) is another upbeat high school kid, who lives life like a Noxzema commercial. She has the best clothes and shoes and has lots of fun. She tends to fight with her dad over his daily dose of Vitamin C, (played by Dan Hedaya) who is a famous litigator. Cher does not like the idea of her ex-stepbrother Josh (played by Paul Rudd) showing up for dinner.

Dionne (played by Stacey Dash) is Cher’s best friend and both are named after infomercials. They go off to school and walk in like they own the place as they gab about boys. In class, Cher tries to debate and pulls off a good speech for the students. That means it was a fairly crappy bizarre speech according to the teacher. But despite the stirring words, her report card still reports it as a C which totally brings down her grade point average.

Cher puts on some more clothes as she talks to her ex-stepbrother Josh and they clearly do not get along. As they fight over what to watch, they are called by their father to come eat dinner. She successfully defers the report card discussion from her dad by saying she should be able to negotiate better grades. As it turns out, she is actually quite successful on physical education and language arts. However, she falls flat on trying to convince her debate teacher, Mr. Hall (played by Wallace Shawn). Inconceivable!

So, it is off the mall to go like sh-OP-ping! Cher and Dionne try to think of ways to make Mr. Hall happy. The only woman that might make Mr. Hall is Miss Geist (played by Twink Caplan). Maybe with a makeover, Cher can make her somewhat more presentable. Cher plants a rose and a note in Geist’s box. Apparently it works. Cher plants the seed with Mr. Hall as well. However, at home her dad puts the lockdown on her driving.

Meanwhile, there is a new girl at school named Tai Fraiser (played by Brittany Murphy) who the two girls decide to take up her as a pet project. So they start out as making her over and hoping that she becomes a more respectable high school student. However, Tai still would rather hang with local loadies like Travis Birkenstock (played by Breckin Meyer). Will they ever survive this year?

Besides perhaps dumbing down an entire generation of teenagers, Clueless broke out of the pack of teenager high school movie comedies of its time. It probably did so by just being so outlandish with its portrayal of Beverly Hills and the valspeak they inserted into every conversation. The film also lived and died by Alicia’s Silverstone characterization of Cher. Honestly, she did a knockdown, drag out job. I mean, somebody should have knocked her down and dragged her out of the place. I kid, I kid.

Seriously though, the movie is not a masterpiece by any stretch of the imagination. Most guys, no matter how often Alicia Silverstone prances around in a plaid skirt (if it makes the males feel any better, Alicia was 18/19 when this film was made), are just going to roll their eyes at almost every scene. The characters are completely unbelievable for the most part and the all too happy ending with hardly any growth in character is just too much to bear.

Don’t get me wrong. What I just described is the way the movie is supposed to be, which makes it all that much more nauseating. One good example, Paul Rudd, who I quite enjoyed in Anchorman and Role Models just seems lost here and gets by on his charm alone. The same could be said for just about any teenager character in this movie. At least I enjoyed the cameo of Julie Brown playing a P.E. coach, Millie Stoeger.

The video is in 1.85:1 widescreen presentation in 1080p resolution. The movie has plenty of teenagers doing party time things and wearing fashionable clothes. It is pretty for what it is. Most of the scenes do spring to life and the darks perform just as well as the blacks. The best examples mostly center around the classroom and party scenes where plenty of detail can be found. Flesh tones are accurate and overall this is a pleasing movie visually for a 17 year old film.

For the audio portion, we get a 5.1 English DTS-HD track (Additional tracks include 2.0 Dolby Digitals for French, Spanish and Portuguese). Dialog is the most important audio feature here and it does it crystal clear. There is also quite a bit of trendy type music which blends nicely into the background. Surrounds are less frequent but do an okay job as well. Subtitles are included for English, English SDH, French, Spanish and Portuguese.

Clueless was a great success of its time. It made $56 million domestically on a small budget (most of which was probably clothes) and spawned a television series that lasted a lot longer than most probably thought it had plaid skirts for. Despite the influence the movie had, there is something I just can not wrap my head around. It is so outlandish that seems to miss the point when it is important. The characters exude a ton of charm but fail to carve out any real substance.

The disc however is a great treat for any fan. The video and audio are the best this movie has ever seen and even though the extras were simply taken from the Tenth anniversary dvd, most people will probably be happy to see them for what they are. A retrospective commentary by say Alicia, Stacey, Paul and one or two others might also be fun down the road when this sucker hits a 25th anniversary. Fans will eat this up, but I am going to go ahead and pass on this movie on anything more than a curious observation. Totally.

Michael Durr has been reviewing movies for the better part of fifteen years now. He primarily enjoys thrillers, sci-fi, animation and even a little courtroom drama. His favorite films include Escape from New York, the Goonies and anything with Alyssa Milano. When he’s not praising Kurt Russell as the greatest actor of our time or scratching his head over a David Lynch flick, he’s spending time at home in Texas with his lovely wife, Lori and his amazing son. How they put up with him is a mystery, but even Basil Rathbone doesn’t have the time to solve that one.
The Avengers Felicity – Season One