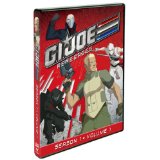 Growing up as an only child, I did my share of strange things. I staged wrestling matches with my wrestling figures, ran baseball games with myself (against myself) and also did my share of creating battles with my G.I. Joes. Feel free to call me a nerd or introvert at any time. As a result, every time I see a wrestling match or watch some baseball, I am reminded of those unique moments I shared as a child. Perhaps when I watch the new G.I. Joe Show: Renegades, I can relive some of those moments yet again.

Cobra Industries is here to help the world by providing products that every man, woman and child can enjoy. They provide helpful pharmaceuticals to the world, they even bake a tasty apple pie. Cobra is so involved in the everyday activities that it is hard for anybody to imagine their lives without them. This explains why they are the perfect corporation to house a lot of secrets and have a very heavily armed security force. The more you know (rainbow flies across the screen).

Meanwhile, we join a military based where Sergeant “Duke” Conrad Hauser is being introduced to his new team of soldiers. They include Corporal Marvin “Roadblock” Hinton, a mechanic and heavy weapons expert as well as Nicky “Tunnel Rat” Lee, a medic and bomb disposal expert. In addition, they have a new private named Wallace Weems who is a very handy paratrooper (and responsible for the nicknames of the group). The four also have a female in their midst, Shana “Scarlett” O’Hara, a military intelligence officer.

Incidentally, Scarlett dubs Wallace as “Ripcord” shortly after that and the name sticks. The first mission for the group is to visit one of Cobra’s pharmaceutical plants. However, once they get there, the group of soliders is informed that this is a spy mission and they need to uncover some of the secrets that the military believes is going on. This does not go as well as planned however when they find themselves on the opposite end of laser fire. However, it appears that Scarlett does have a very powerful friend by the name of Snake Eyes.

The team is able to survive the volley and as they stride deeper into the plant. There they will find a scientist by the name of Brian Bender (Dr. Mindbender) who turns a series of Bio-Monsters (think giant goop monsters) against them. Again, the team survives but not without a casualty. The rest of the team now find themselves labeled and framed as renegades. They are on the run with their lives and honor at stake. They not only have to fight the forces of Cobra Industries but find themselves on the defense from a group of military officers known as the Falcons. Can these ordinary joes survive?

This is certainly a different take on the classic G.I. Joe story. It used to be that G.I. Joe was a special military force and Cobra was a bunch of terrorists. That dynamic is changed almost 180 degrees which makes a lot of sense when we think of big business and corporations often controlling large faucets of our lives. They make for the perfect evil force which is shaped to be Cobra Industries. Another thing I liked was there were a lot of familiar faces on both the Joes side as well as Cobra.

On the cobra side, in addition to Mindbender, we get the Baroness, Destro, the Twins (Xamot/Tomax), Major Bludd, Storm Shadow, Cobra Commander and even one of my personal favorites, Zartan. We get to see some interesting characters on the military side too including Flint, Lady Jaye and Wild Bill (think helicopter pilot). It is really a great cast when you think about it and it creates a nice continuing story, something that was missing a lot of the time during the original show. It isn’t just one battle after another, we get developing plot lines and it is very refreshing.

The video is in 1.78 Widescreen presentation. The style is comparable to recent superhero cartoons and is mostly 2-d animation with an occasional splash of something in pure CGI to emphasize a certain scene. All of the characters look pretty good with the exception of Duke who was a little too much on the anime side. Scenery is usually well done and locales appeared different from each other rather than attempting the same color palette every time.

For the audio portion, we get a 5.1 English Dolby Digital Track (2.0 Dolby Digital Stereo track also included). This sucker is loud. Gunshots and lazer fire blaze across the speakers and the action is certainly bombastic. The dialog takes some getting used to as the action is so loud and furious and then the talking takes one or two steps back. Overall, it is an excellent track and lots of fun (or being asked to turn it down) will be had.

Well, bad news for G.I. Joe fans. It looks like the new movie is postponed until 2013 so they add back in 3d (*yawn*) and have better competition (I guess Avengers, Dark Knight and Spiderman was a little much). In addition, it looks like G.I. Joe Renegades only lasted one season (26 episodes) and there won’t be a second one. It is a real shame because the concept was different and it really worked. We get volume one here and there are not too many dull moments to be found.

The show includes a full range of favorite characters that will make most diehard fans happy as well as a stimulating story to draw in some new viewers. Unfortunately, we did not get any extras but strong presentation values help this package a lot. I give this a strong recommendation at the right price. I am not a big fan of volume sets (unless the season goes above 30 episodes), but given that the show only last one season, you really can’t blame them too much for stretching it out. Now you know. And knowing is half the battle.

Michael Durr has been reviewing movies for the better part of fifteen years now. He primarily enjoys thrillers, sci-fi, animation and even a little courtroom drama. His favorite films include Escape from New York, the Goonies and anything with Alyssa Milano. When he’s not praising Kurt Russell as the greatest actor of our time or scratching his head over a David Lynch flick, he’s spending time at home in Texas with his lovely wife, Lori and his amazing son. How they put up with him is a mystery, but even Basil Rathbone doesn’t have the time to solve that one.
Exclusive Interview With Filmmaker Joe Dante Metal Tornado