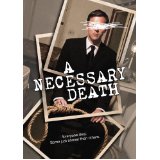 Gilbert (Gilbert John) is a film student with a radical idea: make a documentary about someone who is going to commit suicide. Get to know why, get to know the person, follow the whole process, right up to the very end. Collaborators Valerie (Valerie Hurt) and Michael (Michael Traynor) have deep misgivings about the project, but sign on when the apparently ideal subject is found. This is Matt (Matthew Tilley), who suffers from a brain tumour and simply wants to choose his moment to bow out with dignity before the pain becomes too severe.

Filming the filming (as it were) is Gilbert’s roommate Daniel, played by the film’s actual director, Daniel Stamm. This metafilmic bit of casting is no mere conceit, but is central to the movie’s thematic concerns. We’ve seen a flood of found-footage movies in the last few years (such as Stamm’s own The Last Exorcism), but this 2008 effort is one of the few (along with the likes Incident at Loch Ness and Man Bites Dog, and, in a somewhat more dubious ethical position, Cannibal Holocaust itself) that makes the found-footage aspect crucial, rather than simply just another narrative convention.

Obviously, the moral dilemmas created by Matt’s desire to end his own life are important to the film’s story, and to its credit, A Necessary Death asks the hard questions without providing easy answers. But the real ethical crux surrounds the filming of the documentary. Is it exploitation? Or is it an honest chronicle? To what degree are documentary filmmakers implicated in the very subjects they are recording? Is it even possible to avoid shaping the events being chronicled?

Again, brutally hard questions asked, and while answers to some of them may be forthcoming as the film marches toward a conclusion that is inevitable, pointed, and essential, others are left with which the viewer must continue to wrestle. One is likely to do so in no small part thanks to the performances. These are uniformly strong, producing a convincing illusion of raw, unscripted reality. Watch, for example, the expressions of Hurt’s face during the shoot as, off to one side of the frame, she crumbles before the enormity of what she and her fellow filmmakers are doing.

A striking film, then. Intimate and challenging, it is at once emotionally gruelling and intellectually exciting.