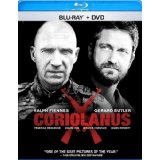 “This Martius is grown from man to dragon. He has wings. He’s more than a creeping thing. There is no more mercy in him than there is milk in a male tiger.”

There’s a certain hierarchy when it comes to the amount of cinematic interpretations of William Shakespeare’s plays. At the top tier, we have the endlessly adapted Romeo and Juliet, Hamlet, Othello and the Scottish Play. A step below that, you’ve probably got your King Lear, As You Like It, A Midsummer Night’s Dream and a few more. And about a dozen tiers below that, we finally come across Coriolanus.

The play is based on the life of the legendary Roman leader Caius Martius Coriolanus, who earned his additional surname after a bloody victory in the city of Corioles. Ralph Fiennes stars in — and makes his directorial debut — with a cinematic adaptation that transports the play’s action (and its language) to a contemporary setting.

Coriolanus is far from the first film to try and pull this trick off. (Baz Luhrmann’s 1996 version of Romeo and Juliet is probably the most famous/infamous example.) Fiennes has a trickier task because, whereas Romeo and Juliet is so familiar to audiences that it was begging for a radical reinterpretation, I don’t think I’m breaking any news when I say that the story of Coriolanus is much more obscure. As a result, can we really fully appreciate all the work Fiennes and screenwriter John Logan did with this update when the majority of us aren’t familiar with the source material?

The answer is…mostly! The story is set in “A Place Calling Itself Rome” (so that it could stand in for any powerful, modern city while maintaining the integrity of Shakespeare’s original language) and follows Coriolanus as he battles the Volscians, who are led by his sworn enemy Tullus Aufidius (Gerard Butler). After Coriolanus achieves glory on the battlefield, his political influence grows in “Rome.” Thanks to a pair of scheming tribunes (James Nesbitt, Paul Jesson), Coriolanus is banished and eventually joins forces with Tullus Aufidius to exact revenge on his homeland.

From the moment he marches on screen, Fiennes — best known these days for running around without a nose while trying to kill Harry Potter — commands the screen in a way I haven’t seen since his breakout performance in Schindler’s List. If anything, Fiennes is too forceful: the “man to dragon” line (perfectly delivered by the excellent Brian Cox as a sympathetic senator) doesn’t exactly apply because the imperious Coriolanus — with his open disdain for the lower class — comes off as a dragon from the very beginning. Fiennes is matched (and perhaps surpassed) by the great Vanessa Redgrave as Volumnia, Coriolanus’ proud mother and the only person who can bring him to his knees. It’s no accident that the Elizabethan English flows best and is more impactful when it’s delivered by Fiennes, Redgrave and Cox.

On the other hand, Gerard Butler does only decent work in an underwritten part that never quite convinced me Aufidius was on the same level as Coriolanus. Meanwhile, the gifted Jessica Chastain has an even smaller role as Coriolanus’ wife Virgilia and doesn’t leave much of an impression beyond her fetching red hair. (The fact that a lot of her scenes were with Redgrave definitely didn’t help.)

Early on, Fiennes the director does an impressive job of translating the conflict in Shakespeare’s original work into a kick-butt war movie/political drama. However, as the story progresses, the extended machinations of the tribunes slow the movie’s momentum on the way to its tragic conclusion. (We ARE dealing with Shakespeare here, remember?) I also wish the movie had more fully explored the timely issue of the tension that results from economic equality. The issue is boiled down to sporadic news reports and a couple of angry protests/riots.

Still, this is a worthy introduction to one of Shakespeare’s lesser-known works and the performances in Coriolanus are magnetic enough to hold your interest throughout, even if you don’t always understand what the heck they’re talking about.

Coriolanus is presented in its original aspect ratio of 2.35:1. The 1080p image is arrived at with an AVC MPEG-4 codec at an average of 21 mbps. You wouldn’t normally expect an adaptation of a Shakespearean play to invoke The Hurt Locker‘s gritty aesthetic, but that’s exactly where Coriolanus goes (especially early on). There is some stunning imagery that comes across beautifully on this Blu-ray. The color is purposefully drained out of some of the scenes, but the smoke and blood still translate well during those early battles. The film also effectively blends different film stocks, occasionally weaving in intentionally grainy news reports. I did notice some issues with the black levels as well as grain that didn’t appear to be intentional, mostly in scenes featuring Aufidius and the rest of the Volsces in their dark hiding place.

As is the case with every war movie I’ve reviewed, the DTS-HD Master Audio 5.1 track is at its best when it’s conveying the full depth of a cinematic battle. The action scenes in Coriolanus do not disappoint in this regard. What is disappointing is that the sound level on the dialogue seemed to fluctuate throughout the film. Sometimes you could hear the words perfectly (especially when Fiennes or Cox were delivering a choice line), while other times I had to raise the volume quite a bit to catch what was happening. (As if fully comprehending the Shakespeare’s text wasn’t challenging enough for me.)

Feature commentary by director/actor Ralph Fiennes: Not surprisingly, Fiennes — who was a producer on the movie, along with directing and starring in it — offers a wealth of information on the subject of Coriolanus. He talks about how this project was a “lurking passion” ever since he played the role on stage in 2000 and recalls filming in Serbia with local talent. I actually think he provides a bit too much information.  Instead of using the film as a jumping-off point for discussion, he often narrates what we’re already seeing on screen, which makes this commentary sound like one of those descriptive audio tracks. I’m glad this commentary exists, but next time Fiennes may want to have someone else with him so he can have a more natural conversation.

The Making of “Coriolanus”: (5:38) A slightly above average behind-the-scenes doc featuring soundbites from Fiennes, Redgrave (who raves about some of the great parts Shakespeare wrote for women), Butler, Cox and Chastain, as well as praise for Fiennes’ first outing as a director.

Ralph Fiennes has made an admirably ambitious feature film debut, and it makes me interested to see what else he can do behind the camera. I’m not going to lie: I also believe Coriolanus will play better at home than it did in theaters — especially if you have a decent A/V setup for those battle scenes — because you’ll have the luxury of putting on the subtitles (which I usually hate) to catch any line of  Shakespearean dialogue you may have missed.

Or maybe that’s just a plus for dopes like me.

The Adventures of Tintin (Blu-ray) A Necessary Death