Posted in: No Huddle by Brent Lorentson on June 5th, 2012 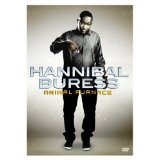 Hannibal Buress brings his unique voice to this hour-long special and delivers.  I have to be honest, I had never heard of this guy when I got the DVD to review, and now I find myself hoping to catch a live performance if he ever brings his tour down south.  Once a writer for SNL and doing some work with 30 Rock, this young up-and-comer is sure to make a name for himself and hopefully become a name regarded with the best of the comedy elite.

His low energy deadpan approach kind of reminded me of Steven Wright but far more entertaining.  With bits that go from being caught jaywalking in Canada, to getting his debit card stolen, and masturbation while wearing a hoodie to “feel creepier” I find it hard to believe there isn’t a topic he couldn’t find the humor in.  What I enjoyed most was how it seems he enjoys discussing topics that make the audience feel a bit uncomfortable to laugh about, like when he discusses how he hopes his nephew doesn’t get into college.  It seems cold, and it is, but when he said it I couldn’t help but laugh.

What I also found refreshing was how Hannibal stayed away from politics and anything that might seem topical.  So instead of getting a comedian throwing political views, we got witty observations concerning rap lyrics.  This point was one of the parts that had me laughing the hardest when he gets into the Young Jeezy lyric  “My rooms got rooms.” And Hannibal responds, “Nah Jeezy those are closets.”  It’s moments like this throughout the special that revealed how sharp his wit is.

Also on the DVD we get a behind-the-scenes documentary about the preparation Hannibal had before the filming of the Comedy Central special.  Seeing Hannibal working on his set as he goes to several different comedy clubs in his hometown of Chicago before flying out to New York showed only a glimpse of what these guys do while making a living doing stand-up.  After watching Animal Furnace I’m looking forward to hearing what Hannibal has in store for us next.

Brent Lorentson is a horror writer and film critic based out of Tampa, Florida. With a BA in Digital Film, he co-wrote and co-directed Scavenger Hunt. His short stories have appeared in various horror anthologies. In 2019 his short script Fertile Blood will be a part of the anthology horror film Slumber Party. He is currently working on his first novel A Dark and Secret Place set to be released in late 2019. Favorite Films: Taxi Driver, Fight Club, I Saw the Devil, The Wild Bunch, Dawn of the Dead, A Clockwork Orange, Pulp Fiction, Heathers, The Monster Squad, and High Fidelity.
Tosh.O – Hoodies (Blu-Ray) 96 Minutes