Posted in: Disc Reviews by William O'Donnell on June 5th, 2012 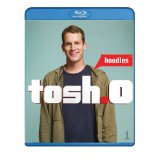 YouTube had all but killed off the idea of mailing silly home videos to the likes of America’s Funniest Home Videos. These days, people prefer to stream dozens of videos on their computers and save themselves from the watered down jokes of Bob Saget or current host Tom Bergeron. Tosh.O takes a similar format of displaying such silly videos, but focuses on things that have gone “viral” online. Like AFHV, Tosh.O adds their own commentary and sketches to the presentation but in a much more crass, cable-savvy manner.

Daniel Tosh makes for a very suitable host, which makes the difference to those who may consider aimlessly surfing through YouTube’s channels to be a more valuable way of taking in the latest in mind-numbing entertainment. Tosh not only is capable at delivering edgy quips but often places himself at the butt of self-deprecating and/or harmful sketches where he may partake in the same idiocy he seems to be lambasting at other points in the episodes (a memorable example being his attempt to eat a teaspoon of cinnamon and karate chop a hundred coconuts after smoking Salvia).

One of the most intriguing recurring sketches is “Web Redemption” where they track down the star (or victim) of a popular clip and give them the opportunity to explain said clip as well as recreate the situation in order to avoid their popular blunder (these clips often have views calculated in the multiples millions). It is often all too clear that these people are famous for an accident, and not their charm or skill. Every once and a while though, a truly charming, or even surprising individual comes along and you can’t help but smile as their 15 minutes of internet fame transfers to a little slice of television too.

Widescreen 1.78:1. Tosh looks a little odd in some of the green screen shots. The transfer to Blu Ray wasn’t the most flattering nor the cleanest.

Digital Exclusives / Extended Segments / Outtakes: I grouped these together because they all essentially offer the same thing…more o the same.

If you’ve got a personal vendetta against time, then this show is the ultimate in killing it as it can be eerily addictive. If your friends catch you watching it, you’re either in for a cavalcade of rolled eyes…or a heck of a lot of fun sharing. By the way, the title says “Hoodies” but it’s actually from Season One.

We Need to Talk About Kevin Hannibal Buress: Animal Furnace