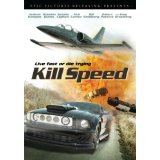 Films have been around for decades that have followed the life of crime and the pitfalls that come with it.  And with the success of the AMC series Breaking Bad, it seems meth is the new drug of choice for Hollywood to exploit for the big screen.  There have been plenty of great films and shows to come out of the exploitation of the drug trade; my personal favorites are Blow and Traffic.  But what always made this subgenre of film engaging is that it seemed to always balance the pros and the cons of living the life of crime, and in the end the audience would be given the message that crime doesn’t pay.  Even the most popular drug film of all time, Scarface, ends with our anti-hero dead.

When it comes to Kill Speed it would appear as though nothing was learned from these films, and instead this felt as though it were a recruitment film for drug trafficking.  I don’t believe this is what the filmmakers set out to do with this film, but it does strongly give the message that it’s OK to commit a felony, and not only will you not get in trouble, but your country will label you a hero.  I really want to believe that this was not the intention here, and not to sound like a prude, but as a responsible viewer I have a problem with the “hero” of this film being a greedy punk who runs drugs and money but suffers no consequences even when he is caught and even gets the girl.  This is bad storytelling wrapped in beautiful aerial cinematography.

The film follows Strayger (Andrew Keegan), a drug-running pilot with his group of friends known as the “flyboys”.  They live the good life, flying across the Mexican border to deliver drugs or money and return in time to do some surfing and throw late-night parties in their airplane hangar. Too bad for them the US government has been following the group for some time, and they are getting ready to move in and make arrests so they can take out the head of the cartel.  With the government moving in, Strayger happens to meet Rosanna (Natalia Cigliuti) who seems to be a beautiful thrill junky that Strayger is instantly smitten with.  Strayger ignores the advice of his friends and continues to see Rosanna, and ignoring common sense, he doesn’t notice how nosey she is.   And it comes as no surprise to the audience that she is (cue suspense music) working undercover.  Not only that, but she has fallen in love with Strayger.  Once the “flyboys” are in custody they are offered a deal with the government to rescue a hostage, and in return they get their freedom; this is a mission approved by the President no less.

As the film escalates there are so many contrived scenes that a viewer is more likely to believe Mothra vs. Godzilla was based on a true story than believe anything in this movie could or would ever happen. Since when did the government not take extreme measures when a plane enters restricted airspace?

The one thing this movie does have going for it is the aerial cinematography.  There are plenty of beautiful shots that if done in 3D or perhaps IMAX format could have made for a breathtaking experience.  Seeing the actors in the planes and not in front of a green screen did help keep this film afloat.

But no matter how good a film might look, it can’t salvage this bad script.  The third act of this film turns this playboy pilot into an expert marksman who is rescuing a government officer from the captivity of the Mexican cartel.  Along the way Strayger crosses paths with some employee of the cartel who wants to rescue his daughter who has been forced to be the Kingpins’ whore (seriously, I’m guessing that’s what happened here, because they just magically appear in this story).  This story simply just keeps on going making no kind of logical sense and hopes that the audience is simply too dumb to not notice.

This is just a bad movie with a lot of talent in front of and behind the camera.  It seems everyone is trying here to make this movie work with the exception of the writer and director.  This is a project that should have brought on a writer to tweak this script, but it’s in the past, and this film will be forgotten like many before it.

Brent Lorentson is a horror writer and film critic based out of Tampa, Florida. With a BA in Digital Film, he co-wrote and co-directed Scavenger Hunt. His short stories have appeared in various horror anthologies. In 2019 his short script Fertile Blood will be a part of the anthology horror film Slumber Party. He is currently working on his first novel A Dark and Secret Place set to be released in late 2019. Favorite Films: Taxi Driver, Fight Club, I Saw the Devil, The Wild Bunch, Dawn of the Dead, A Clockwork Orange, Pulp Fiction, Heathers, The Monster Squad, and High Fidelity.
American Pickers: Volume 3 Entourage: The Complete Eighth and Final Season (Blu-ray)