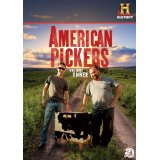 The wife and I have spent quite a few weekends within the last year going to antique shops and malls, flea markets and basically any place where we might go through a pile of stuff to find that one special item for our collection. The search has produced many interesting items and it brings us joy to see all of the items that simply do not show up in a retail store. Today, we are reviewing American Pickers volume 3, a show that lives on the art of finding that next treasure by going through America’s backyards.

For those who are not familiar with what exactly is American Pickers about, here is a short synopsis There are these two guys, Mike Wolfe and Frank Fritz who roam the United States in search of knick knacks, car parts, collectibles, anything that will bring them money. A picker. Their method is somewhat unorthodox as they actually visit people’s homes, storage sheds, and any other place where somebody might store their collection.

Sometimes it is totally random or freestyle as they like to call it. They might see a car in the shed and a few outlying houses. This prompts them to start knocking on doors and see if the owners are willing to sell them anything. Sometimes, they will get a lead from the beautiful Danielle (who runs their shop called Antique Archaeology) who does a fantastic job of calling locales and finding out who has the best stuff available. Regardless of method, the guys find a little of everything.

On to volume 3. These eight episodes on two discs, take us from episode 9 to episode 16 of the second season. For the uninformed, the show is now well into its fourth season. Pick up the pace guys, come on. Despite the show’s dvd release schedule being way behind in my opinion, this selection of eight shows really put on display some fun times to be had. Let us explore a few of the episodes in detail.

Our first episode is called Hobo Jack. Mike and Frank start off as they usually like to do with a spout of freepicking. They find Tony who is willing to sell anything except his dog and wife (and chances are if they had enough money, the wife might be for sale too). Among the items, some large antlers are bought, a Dick Tracy toy car is acquired, but the real find is an antique movie projector which they get at an absolute steal.

After that, they visit Ken who owns a small shop. The pickings there lead them to an urn, leather chairs and a bicycle he does not even own (the owner comes later to pick up the cash for the bicycle). Finally, the picking duo gets a lead from Danielle about a hobo named Jack who lives out in the middle of nowhere. Frank and Mike get there is find an old man playing harmonica and a guitar at the same time. There is square foot after square foot of just stuff that this guy has collected from his life.

However, the two are able to walk out with the original motor and transmission from a 1921 Indian motorcycle as well as an Excelsior motorcycle on a gamble. Their gamble later proves to be the right call. We move on to a later episode called Mike’s Breakdown where their first lead takes them to a lady named Jan in Wisconsin. Her husband left behind three generations of junk including possibly a 1965 Honda motorcycle.

When they get there, there is no Honda to be found but they do find a clock, century old toys and tons of Locksmith memorabilia (my wife was salivating, she is a sucker for old keys and related material). The most impressive find is a box of comics and Mad Magazines that Frank is able to snatch up for $10. Later picks from other locations include a lead window, liquor store sign, a pinball machine and some Rubber Aliens from the tv show Roswell. Near the end of the show, the duo have van trouble and have to get it towed.

The start for Danielle is rocky. She does not seem willing to get “dirty” so to speak but with a little egging from Mike and Frank, starts to take to it quickly. Later on, Frank tends to the store best he can while Mike and Danielle go off to Pennsylvania to visit two zany eccentrics which scores some vintage clothes for the young lady. But the big scores come later when Mike and Danielle go an old hotel that is over a hundred years old. Danielle soon uses her charm and beauty to score some great picks from the two brothers working there.

I think by the time the end of volume three comes to a close, both Mike and especially Frank come to a better appreciation of all that Danielle does for the store and the business while she certainly understands more of what Mike and Frank go through as they dig through trash to find treasure. It is a team concept that despite occasional money issues (as talked about in an episode or two) really harnesses what a rewarding vocation should be. This comes out consistently when you watch the show.

But like a lot of shows of this type, the persistent problem is that once you watch these shows once, there is little reason to watch it twice. I had caught a couple of these episodes on television when they aired and watching them again did not lead me to anything new, just a desire to go to more antique malls. This show, just like its sisters and brothers thrives on getting new content each and every week. The excitement to see that next treasure simply does not exist if we already know what it is.

The video is in 1.78:1 anamorphic widescreen presentation. The show looks pretty good as A&E runs most of their shows in high definition widescreen allowing for a good bit of detail. Also, you get to see all of the crap up close and sometimes you just want to yell, “HEY MIKE, GO OVER THERE!” They hardly ever go look at the things we as the viewer are curious about. Good presentation overall.

For the audio portion, we get a 2.0 Dolby Digital Stereo track in English. As wonderful as the video is, the volume is not much to speak of. It is 100% dialog (unless you count a barn door closing as a sound) and your only difficulty of listening to it will be limited by some of the harsh mid-west accents. In that sense, it is perfectly manageable. But considering they are out in the country constantly, you would think you might hear cows or something. English and Spanish subtitles are included.

I am not a big fan of these volume sets for the simple fact, eight episodes might barely fill a weekend of viewing and then you are off to waiting a few more months for another volume set. Despite this, these eight episodes are probably the most enjoyable I have seen yet because Mike, Frank and Danielle are really coming together as a team. They each have their strengths and weaknesses and compliment that into a great show from week to week.

However, this set does no favors for the show. Instead of extending the show by providing commentaries or perhaps some pop up facts or maybe a behind the scene featurette, we get no reason to dive back into the same treasure pile. I do give this set a recommendation but at a bargain basement price (under $10). That is the only way I can recommend what amounts to a Labor Day marathon. It is fun for the ride, but once it is over, there is no need to do it again.

Michael Durr has been reviewing movies for the better part of fifteen years now. He primarily enjoys thrillers, sci-fi, animation and even a little courtroom drama. His favorite films include Escape from New York, the Goonies and anything with Alyssa Milano. When he’s not praising Kurt Russell as the greatest actor of our time or scratching his head over a David Lynch flick, he’s spending time at home in Texas with his lovely wife, Lori and his amazing son. How they put up with him is a mystery, but even Basil Rathbone doesn’t have the time to solve that one.
Too Big to Fail (Blu-ray) Kill Speed