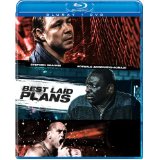 That famous proverb comes from a couplet in the Robert Burns poem “To a Mouse.” (“The best-laid schemes o’ mice an’ men/Gang aft agley”) Simply put, it means that even the most carefully prepared plans can go wrong at any time. The line also provided the title for John Steinbeck’s “Of Mice and Men”, the classic 1937 novella that has since become required reading in many high schools, along with “To Kill a Mockingbird”, “The Great Gatsby” and others. Steinbeck tells the tragic story of slow-witted Lenny and his friend/protector George, two migrant ranch workers during the Great Depression. I imagine Steinbeck’s best laid plans probably didn’t involve his story becoming the basis for a British cage fighting movie.

To be fair, Best Laid Plans — a relationship drama masquerading as a gangster flick directed by David Blair — only claims to be loosely inspired by “Of Mice and Men.” (I cannot emphasize the word “loosely” enough.)

Danny (Stephen Graham) is a two-bit Nottingham low life who lives with and looks after Joseph (Adewale Akinnuoye-Agbaje), a gentle giant with a mental age of seven. Since Danny is in debt to a local crime boss (David O’Hara), he manipulates Joseph into competing in a series of underground cage fights until that debt is paid off. Although the film’s trailer and Blu-ray case heavily emphasize the gritty crime aspect of the story, Best Laid Plans mostly focuses on the bond between Danny and Joseph, as well as Joseph’s relationship with a mentally challenged woman named Isabel (Maxine Peake) and Danny’s pursuit of a lonely prostitute named Lisa (Emma Stansfield).

The fact that this movie even exists proves how timeless “Of Mice and Men” is: the book is set during a specific period in the history of the United States and its characters strive for the American Dream, but the story can be believably adapted to a modern day setting in England. I also think there’s room for a cynical take on the relationship between the two main characters, where maybe the intentions of the “protector” are far from pure. My problem with Best Laid Plans is that it doesn’t fully commit to this cynical take.

The movie’s opening scene has Danny convincing Joseph to steal some heavy laundry machinery and Joseph coming to Danny’s aid when Danny is physically threatened. When it’s time for Danny to convince Joseph to compete in those illegal cage matches, Danny uses Joseph’s love for him against the simpler man, which is despicable but also very interesting. Danny starts to feel guilt about this arrangement, yet that guilt doesn’t come from a believable place; it comes from a dramatically convenient place that says Danny has to have some sort of redemptive arc. For example, when Joseph grows closer to Isabel, I got the feeling that we were supposed to feel bad that Danny was losing his only friend. Instead, he mostly seemed angry that he was losing his meal ticket.

I place the blame on an uneven script by Chris Green because Graham and Akinnuoye-Agbaje turn in top-notch performances. It was especially gratifying to see the excellent Graham (probably best known as Al Capone on HBO’s Boardwalk Empire, but the actor has also turned in fine supporting turns in Snatch and Public Enemies) shine in a lead role. He’s great, but even he can’t make Danny’s fluctuations fully believable. Meanwhile, we’re used to seeing Akinnuoye-Agbaje as menacing characters (on HBO’s Oz, and even his soft-spoken man of faith on Lost had a scary backstory), but here he convincingly plays a childlike giant. It’s a tricky role, and it never descends into parody. Peake is also good, but the scenes with Joseph and Isabel bonding tend to drag and eventually become repetitive. The fetching Stansfield makes Lisa seem way out of Danny’s league, so their relationship winds up being pretty unconvincing.

Although it had its flaws, the relationship aspect of the film is still stronger than the gangster/cage fighting material. Despite O’Hara’s best efforts as a nasty crime boss named Curtis, we’ve seen this stuff done much better 100 times before in superior crime dramas. The cage fights are relatively brief and totally formulaic (Joseph refuses to fight and takes a beating until Danny convinces him to fight back, and he knocks his opponents out almost as fast as Hilary Swank in Million Dollar Baby.) The movie flirts with the brutal notion of having Joseph fight a dog — treating the simpleton as subhuman — but quickly abandons it.

In short, what’s supposed to be the driving force for the plot — Joseph competing in these cage fights to save Danny — is easily the least interesting part of the movie.

Best Laid Plans is presented in an aspect ratio of 2.35:1. The 1080p image is arrived at with an AVC MPEG-4 codec at an average of 26 mbps. The video transfer is the best part of the Blu-ray. The black levels are superior (which is imperative, since a lot of the action takes place in dark underground cage matches and at night) and there is an impressive sharpness throughout. Colors mostly take a backseat due to the film’s urban setting (which features fine texture and detail), but there are still a few impressive and surprising pops when Joseph and Isabel go on their lovely outings.

The DTS-HD Master Audio 5.1 track handles the film’s score and the ambient noises of a busy city quite well, but is somewhat problematic overall. The biggest issue is that I found myself having to turn the volume way up to make the dialogue intelligible. That’s a major problem for any small budget, dialogue-driven film. The Blu-ray also doesn’t offer subtitles, so if you can’t make out what the characters are saying through their relatively thick accents, you’re screwed. (It doesn’t help that most of the characters are low lives who don’t concern themselves with proper enunciation.) At least the cage fighting scenes pack a strong enough wallop.

The almost complete lack of bonus material means the filmmakers aren’t around to explain how and why they took their inspiration from Steinbeck’s classic story. (Or to address an ambiguous ending that was supposed to be poignant, but winds up being infuriating.) The performances of Graham and Akinnuoye-Agbaje are the only reasons to recommend this title. There’s definitely room for a great modernized take on “Of Mice and Men”…this just isn’t it.