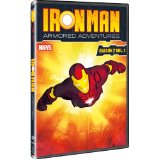 As mentioned previously in my reviews, Iron Man in animated form does not have the greatest track record. I remember watching the Iron Man animated film not too long ago (check here for a small review: http://upcomingdiscs.com/2012/04/29/marvel-animated-features-3-movie-collection-blu-ray/) and just thinking that it never even got close to the awesomeness that is the live action films with Robert Downey Jr. Today, we get to review some episodes of Iron Man Armored Adventures. Hopefully the series improves from last season.

(For those who need to catch up on the first season, please take a look at my review of the first season:
http://upcomingdiscs.com/2010/05/13/iron-man-armored-adventures-the-complete-first-season/)

Somewhere in the city, the evil Unicorn and Killer Shrike are casing a job when all of the sudden, Iron Man shows up. Except, it is not the Iron Man, it is rather War Machine aka “Rhodey” Jones. Meanwhile, elsewhere Pepper Pots is coaching War Machine via uplink and trying to help him defeat the bad guys. But where is Tony Stark one might ask, well he would be at the airport back from his adventures into China.

If we would remember, at the end of last season, Tony went up to China to face off with Gene Khan. However, Gene is not the Mandarin Tony thought he was and his father has unfortunately fallen off the face of the planet. In fact, Tony thinks that Gene might be living it up somewhere in a penthouse in China. But, actually Gene is in the mountains with Tony’s father, Howard (against his will) and trying to find the sixth ring of Mandarin.

Back to the action, but War Machine is not having the greatest luck against the evil duo. Eventually after some back and forth, Rhodey is able to finish the job and races to the rendezvous point where Pepper and Tony are waiting. Tony then takes them to an abandoned temple where Tony has rebuilt the Iron Man armory. It is linked to the spy satellites and has all of the extras. This prompts Pepper to turn on the television to watch her newest crush, the twenty-one year old Justin Hammer.

Justin Hammer is the sole heir of the biggest weapon manufacturer company, even bigger than Stark International. Meanwhile, we listen to a mysterious voice talk to the notorious Mr. Fix who are coming up with a plan to have Whiplash 2.0 to kidnap the young weapons manufacturer. Later, we see Justin meeting up with Obidiah Stane (current leader of Stark International) presumably to buy up the nearest competitor. Tony, Pepper and Rhodey catch this on tv and Stark decides to take up a little spying by armoring up.

Obidiah Stane turns down quickly (he spent a lifetime trying to acquire it in the first place) the offer and Justin storms out of the building. This is when Whiplash comes out and tries to apprehend the young mogul. Luckily, Iron Man is there to take the fight to Whiplash and keep Hammer from being kidnapped. However, it appears that was just a diversion and that a new kidnapping target is about to take place. Who could it be?

The best thing about this season that stands out from the get-go is the introduction of Justin Hammer. Justin Hammer has been old (comics), adult (movies) and now a young adult and he just always seems to work as a credible villain no matter what age they portray him at. The other very worthwhile part about these first six episodes is the Gene Khan and Howard Stark’s ongoing story. They take their time (as they obviously do not want to rush it) in acquiring the rings of the Mandarin and it looks like it is building to something special.

But what is perhaps more interesting is that the other parts of the cartoon are insanely more interesting than Iron Man himself. Iron Man is still portrayed as Spiderman in a heavy piece of armor. Tony wise-cracks, bumbles along through high school, and even have a crush or two on other girls while Mary Jane…errr Pepper looks on disapprovingly. If it was not so obvious, then I might enjoy it. But there is nothing that we can really point to Tony/Iron Man and say that is truly different from the other Marvel high school super hero (except the bad ticker).

The video is presented in 1.78:1 widescreen. The look to Armored Adventures is certainly modern, it has some cutting edge animation techniques. It uses computer generated imagery, similar to cel-shading but with a little less resolution and imagery. The color is certainly sharp for the most part but there are screens where it gives the illusion of Iron Man against a completely static background. There just isn’t enough detail to really sell me.

The audio is presented in English 5.1 Dolby Digital. What Armored Adventures lacks in the video portion, it certainly makes up for in audio. It’s loud and expansive and rivals some of the feature film Marvel animation presentations. Dialog is nice and clear and the effects are dialed up to eleven to provide a great sound environment. There aren’t any other network cartoons I can think of off-hand that are any better than this.

As Avengers chucks along to 600 million domestic and nearly 1.5 billion worldwide, chances are we are going to be seeing a lot of Iron Man for years to come. The cartoon is two seasons deep now and looks to be fueling towards a third season (with rumors of introducing Wolverine) as well as a spin off (Iron Man 2099). But despite some of the good things about this season (Justin Hammer, Gene Khan), I can not get fully behind the main character of Tony Stark aka Peter Parker-Adventures of the Heavy Iron Suit.

However, I can not stress how awesome the video and especially the audio are in this set. But the extras are ridiculously thin and it is hard to get behind any 1-disc volume set. Hopefully, Vivendi will release this as a season set after they are done with these volume pieces. Then I can recommend it to the young viewers at the least. For older viewers such as myself, maybe in this case we should just stick to the live action films. At least there, we understand what the true characterization of Iron Man (Bruce Wayne: Marvel’s adaptation of the billionaire playboy in a Heavy Iron Suit).

Michael Durr has been reviewing movies for the better part of fifteen years now. He primarily enjoys thrillers, sci-fi, animation and even a little courtroom drama. His favorite films include Escape from New York, the Goonies and anything with Alyssa Milano. When he’s not praising Kurt Russell as the greatest actor of our time or scratching his head over a David Lynch flick, he’s spending time at home in Texas with his lovely wife, Lori and his amazing son. How they put up with him is a mystery, but even Basil Rathbone doesn’t have the time to solve that one.
Abraham Lincoln : Vampire Hunter Best Laid Plans (Blu-ray)